Something doesn't add up with Isaiah Thomas and the NBA 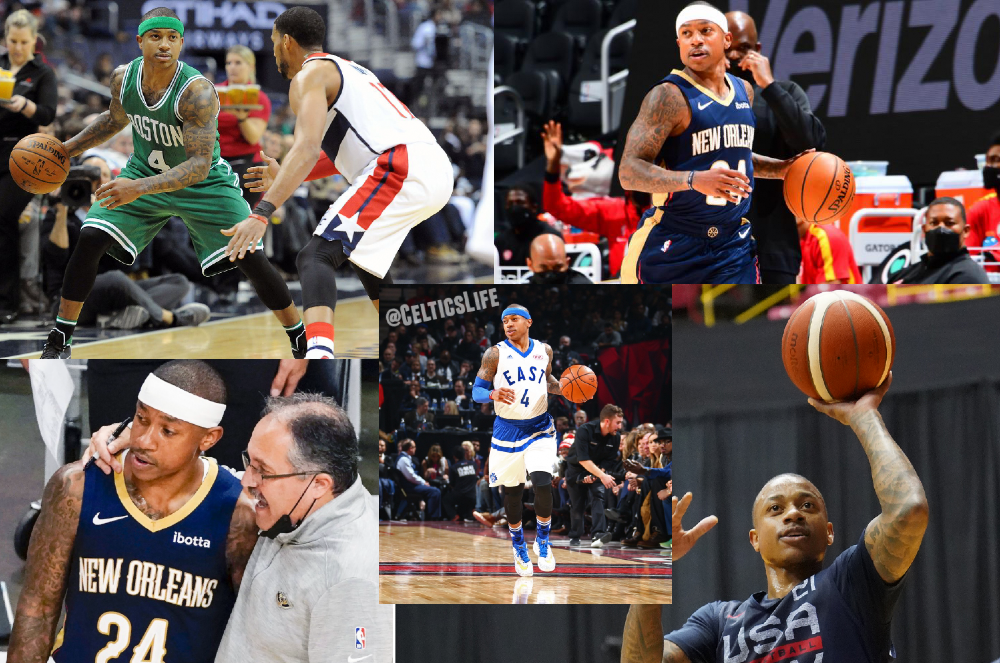 Isaiah Thomas’ 10-day contract with the Pelicans has expired and the team will not look to bring him back right away, source tells ESPN.

Pels could bring him back down the road, though. (1/3)

Meant to write this post prior to Isaiah Thomas signing with the Pelicans, but was too busy covering every credible rumor of a player the Celtics might be interested in. Then Thomas signed with New Orleans, but today we learn what was looking like the expected outcome after a couple DNP CD's, the Pelicans will be letting Thomas go. And so ends another brief stay for the 2017 All-NBA point guard and MVP candidate.

If you're keeping score at home that's a short stay in Cleveland, followed by a trade to Los Angeles, followed by stints in Washington D.C, Denver, and New Orleans. Throw is a trade to the Clippers, who immediately waived him and you have the complete road map.

So here's where things don't add up. Isaiah claims that he's "102%." That he hasn't felt this good since he was healthy in Boston. That the old Isaiah is back. Players that worked out with him this past winter said he's back to his old self. Reporters who are supposed to be top shelf in the NBA game wrote articles that IT was back to his old self. But why doesn't any team want him then?

He just recently turned 32 so he should be in the latter stage of his prime still. It's not like the game has passed him by. He was a great 3 point shooter in Boston and we're still in an era where 40% of teams shots are 3 point attempts, so what gives?

Below are his per game averages followed by his per 36 mins numbers. Thomas started 37 games last season for the Pelicans and shot over 41% from behind the arc. And that was before he became 102% healthy, so despite his lesser numbers during his short stint in New Orleans, he can still shoot. So Thomas can still shoot and is allegedly as healthy as he was since Boston, but again no one wanted him until a couple weeks ago, and he's been let go again. His numbers will never look as good as they did in Boston due to the high usage he had there. It was IT's offense. He had the ball in his hands for 33 minutes per game and could shoot or throw potential dimes whenever he pleased. He wanted the infamous Brinks truck, but he definitely already had keys to the Celtics offense.

So is Isaiah lying or mistaken? Are the other NBA players vouching for him lying? Are the reporters who wrote all the glowing the old Isaiah is back stories lying? There are plenty of homer non-objective Isaiah loving posts on the internet so I will try and tell the whole story here. Yeah, IT likely won't retweet and say thanks, but again there are plenty of homer stories out there. And we all love Isaiah Thomas. This site has probably posted more love for IT the past decade than any other. So let's get that out of the way.

The only explanation I've read was from anonymous NBA personnel who attended the recent Team USA games. The scouting report according to the SI piece I read was that while Isaiah can still shoot and looked healthy, he didn't have the same skills driving to the hoop that prime Isaiah had. That can mean two things. One, that a player isn't back to what he used to be despite his self assessments or two that the player has a mental barrier still to get over in his recovery. Didn't get enough details from the scouts to say whether the issue was that Isaiah simply was didn't drive any more or that he did, but what used to end up as highlight reel lay-ups and and-1's were now ending up as misses or turnovers.

Thomas' turnovers are up post Boston, but not drastically so. Then again if you don't drive as much and settle for pull-up 3's your turnovers should decrease. Someone who has watched more of post Boston IT will have to comment on any difference in IT's success scoring off drives and turning the ball over.

After another operation on his hip, @isaiahthomas says he is back! Is this next season the time the King of the 4th proves the doubters wrong? Check out @celticslife for more! ☘️https://t.co/8FahNGyRMZ pic.twitter.com/OUM60cG3Yb

Similar to other smaller players like Allen Iverson or Boston's current starting point guard Kemba Walker, Thomas is going to have the most success as the #1 guy on a team. We were all a bit naive to expect a max player performance from Kemba once he joined a team with offensive weapons like Tatum, Brown, and Hayward already in place. All of these players are liabilities on defense, but their exceptional offensive games cancels that out partly. That's why Kemba is still a positive player for the Celtics. And some might disagree, but they'd be letting the contract and expectations cloud their more objective assessment. If Kemba signed a contract that paid him $5 mil a yr no one would complain about him. And every team would want Kemba. But teams continue to not even want Isaiah for the minimum.

I think the reason the Celtics have never entertained bring Isaiah back is that it would be painful and awkward fro him to retunr as a 15th man and get cut after a 10 day deal. But if Isaiah was anything close to the player he was in Boston, the other 29 teams should be lining up to give him a shot. So what say educated reader? Are Isaiah, all the NBA players that vouch for him, and the NBA writers lying/mistaken about him being back? Or is he the same player (or close enough at least) he was in Boston and things don't add up for you why he is continuously being dumped? In my opinion, if Isaiah is only 75% of what he used to be then I can understand that he's not an NBA player anymore. But if he's even 90%. he should have a role. Lou Williams is two and a half years older and never and his prime was not even close to 90% of IT's. Jamal Crawford played until he was 40 and again his prime wasn't IT4 level. So why is the former All-NBA player/ MVP candidate who says he's 102% healthy and back unemployed again?