Some thoughts about where the Celtics stand in the playoff picture 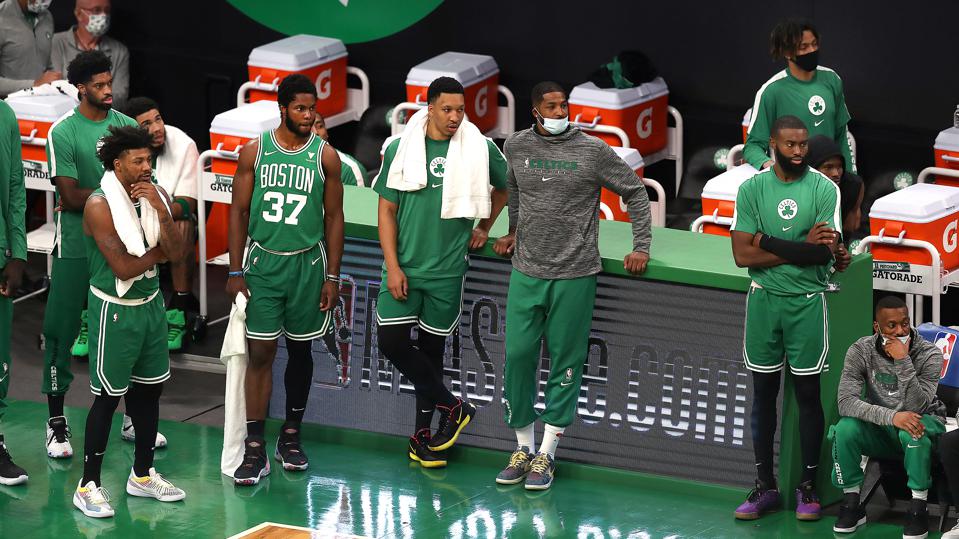 Everyone’s saying that yesterday’s loss to the tanking Thunder was the worst loss of the season. It was really shitty, don’t get me wrong, but it just felt like another Tuesday to me. The Celtics have been putting up stinkers like that one all season long. If you thought that was the worst loss of the season, I urge you to go back to January 17th of this season against the Knicks. The Celtics put up 75 total points that game. 75 total points. The loss against the Wizards on Valentine's Day was brutal too.

So the Cs really aren’t helping themselves out here as the season winds down. They’ve lost four out of their last five games and have 10 games remaining; three of those losses were to opponents that they absolutely should’ve beat. Now they find themselves at the six seed, two games behind the Hawks and Knicks at the four and five. The Heat are right behind the Celtics too. Getting that four or five spot is definitely still in play, but the Cs probably need to win at least seven of their last ten games.

As of right now, the Celtics have a first round matchup with the Bucks. Is that ideal? No, but it’s not the worst case scenario for this team. At this point, we just gotta hope the Celts don’t find themselves in the play-in games. I am scared to see what happens if they fall to that; it would just be super depressing, yet appropriate if they lost in the play-in games.

The ideal situation for the Celtics right now would be to grab the four seed, play the Hawks in the first round and for the Sixers to grab the one seed back from the Nets. The Cs would get home court advantage against an inexperienced playoff team, while they would also avoid a second round matchup with the Nets if they advanced. In terms of entertainment, I would love to see a Celtics/Knicks first round or a Celtics/Heat rematch in the first round. Those games would be gritty as hell.

The thing is that I wouldn't be that psyched to get the four or five seed if that meant the Celtics would have to play the Nets after. I still think the Celtics have at least a slight chance at winning a series against any Eastern Conference team, except the Nets. The Bucks would be a fun matchup for the Celtics, considering that the Cs beat them in a regular season series. The Sixers destroyed the Celtics this season, but for some reason I'm still not completley bought in on them yet; I think the Cs could outlast them in a series (if we're healthy of course). The Nets on the other hand give me nightmares. I would love for the Cs to stay as far away from the Nets as possible during the playoffs.

The Nets are the clear favorites to win the East (-110), followed by the Bucks (+325), the 76ers (+375), the Heat (+1200) and then the Celtics (+2500). It’s very very unlikely that the Celtics make it out of the East this year, but this was the Nets’ year to win ever since they got Harden. Even if the Celtics were having a great season, they wouldn't have had a chance against this Nets team. The Nets have three superstars, plus they just have something about them that gives you championship vibes; they win games without being fully healthy, the role players around them have meshed together pretty well and they always look like they’re having fun. They are the team to beat for sure.

This season has been a colossal shitshow for the Celtics, but it ended up like this because of injuries. Could the team have been constructed better? Probably. Have players been underperfoming too much? Yes. Has Brad struggled with rotations this year? Sure. But who would’ve known that the Cs would have to play Grant Williams and Semi Ojeleye 18 minutes a game? No one planned for that, but there wasn’t much of a choice when someone is out every game. The plan was for the core guys to lead the Cs to a championship, but how was that possible when they can’t stay healthy for long periods of time? The team can’t build confidence or create better chemistry with each other when two important players are sidelined every game. It’s just frustrating for everyone. The Celtics still could've been better than they are now, but the injuries/COVID issues were clearly too much to handle.

The @celtics used their 29th starting 5 in the OKC loss. Fun facts:

-- No lineup used more than 10 times
-- Celts haven't had same starters for more than 4 straight games at any point this year
-- Fournier became the 17th player to start for Boston. Includes 4 Celts who are gone

Regardless of the regular season outcome, anything can happen come playoff time; I’m sure teams won’t count the Celtics out. It seems like this team lacks a lot of qualities of a good team, but they can be good when healthy. Before the last three games, the Celtics won 7 out of 8 and that was still without Rob Williams. I don’t know how far they can go when healthy, but it’s better than what we have been seeing recently. Every game becomes crucial from this point on. It starts tonight against Charlotte.

“I still believe in 10 games it’s enough to find it. ... We can find that fight. We’ve just gotta do it. I know people are tired of hearing it.”