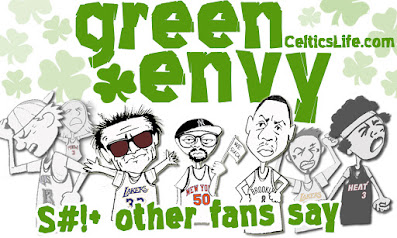 Sorry we're late today but don't look now, the Boston Celtics are on a ROLL! This game was like a palate cleanser for us fans. This season has been a tossup on if we would beat teams we should. We (read: Jaylen Brown) threw knockout punch after knockout punch that actually landed and though it got a little hairy at the end there with the bench units, we pulled out a great win against our forever rivals the Lakers. Though the Lakers were missing almost half their team, including their top 4, Jaylen was still amazing. Even making H I S T O R Y for the Celtics on the strength of the highest efficiency 40 point game. Laker fans usually never hold back, let's hear what they have to say today!

Christening this thread with the obligatory Fuck the Celtics

FUCK THE CELTICS (Definitely saw this one coming)

The ending to this game had me hyped as fuck lol. Great job by the guys at the end there. I also love that we're finally taking care of the ball.
PS
FUCK THE CELTICS (There's a lot of this going around)

Hated it, still do, but not terrible. Fuck the Celtics!

Unreal game from Brown... Schroeder’s not worth 20m+ year

Kuzma 5-14 i feel like somethings up with him especially these airballs
-Kuz has always been a shooter, just not a very good one.

:( (We're glad it's not us with the sad face because of injury anymore)

Our annual beatdown at Staples by the Celtics. Nothing new.

You know we should’ve won that game once kostas scored

THT plays with blinders on.

When's the last time someone dropped 40 on us? (I hope it's the Jayson Tatum 41 piece from last season but I have no way of verifying)

Yeah, professional basketball players should only put in effort against our stars!

“Hey everybody, look at this LOSER doing his best regardless of the opponent!”

Man that was fun. Fkn Jaylen (I can allow this)

The Celtics are so fucking trash lol

LeBron trying to snatch Gasols jersey to jump in lol

Celtics fans should be embarrassed (Why? We know our team.)

Don’t care if we lose, fuck the Celtics. Hilarious shit

Two starting guards on a championship team have 2 points combined.

Lol people don’t realize we can legit be the 7th seed by next week. I’m not trying to be in a play in game (We actually feel your pain here, bud)

Who is this white Mutombo?

Staples center needs to be considered a home court disadvantage at this point, all I ever see is opposing teams come in and torch us with the best games of their careers, like it's actually insane how often that happens (Ring a bell Celtics fans?)

Imagine paying 200 to watch this shit from the nosebleeds lmao

Why is it kuz shrinks against guys his age ?. It’s like he has something to prove and shrinks in the moment.

Wes Matthews you make me sad.

Just let Ben shoot 20 threes from here on out

"its not a shooting foul because this is your 2nd year in the league" - nba refs, probably

NGL this 8 mile kid can play

Is that blonde headed guy a rookie?

Kuz gotta dye his hair back

All that bleach seeped into his fuckin brain

Guys come join us on our Celtics Discord server! We just got discord partnered and would love to have you guys join us! Join us in our game threads to talk games and other things about the team!