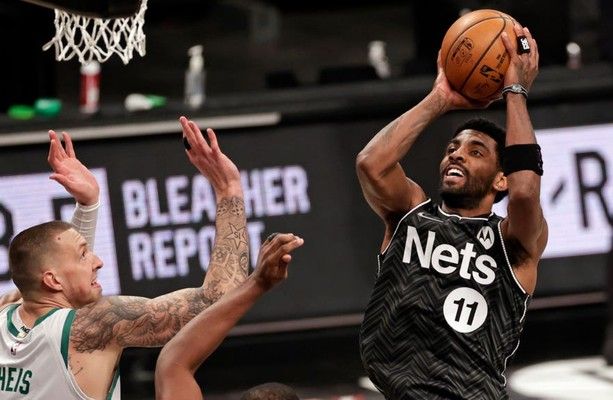 The Nets are the best team in the NBA right now, no question. During the game last night the thing that was stuck in my mind was that this team still has Kevin goddamn Durant. Their offense is just insane, like the closest comparison to this team is the Warriors when KD was there. I don’t see any team in the East beating this team in a seven game series. So with that being said, don’t get too discouraged by this Celtics loss. Sure, they hung in there for the most part and if we got better performances from certain guys, they definitely could’ve pulled it off, but things are going to take some getting used to. So don’t get too mad after this loss; wait until the Celtics snap the Rockets’ 14 game losing streak on Sunday and then be super mad.

In last night's game we definitely had some bad, with a sprinkle of good in there too. Let’s start with the overall defense of the Celtics, which yet again was a tale of two halves. The first half was pretty solid, considering how bad they have been at defense lately. They played with a defensive purpose during the first half; they were playing aggressive on-ball defense, trapping efficiently and they even pressed a little bit in the first half which has been rare. In the first half the Celtics got eight steals (four of them from Jaylen) and five blocks, compared to getting two steals and five blocks (four of them from Robert Williams) in the second half. Steals aren’t the most revealing defensive stat, but in this game it tells you how they stopped being as aggressive. We saw some flashes of really good defense last night, which is encouraging but we need more.


In the second half, we have the same old story on defense. The Celtics were just leaving players open along the perimeter the whole time. The Nets shot 46% from three, while their bench alone went 10/16 in the game. I get it though, you want to have most of your focus on Kyrie and Harden, so they just have to live with the Tyler Johnson and Jeff Green open threes. But still, I feel like there were times where the Celtics trapped Kyrie/Harden way too early, which made it way too easy for them to find the open look. If the Celtics are going to play that way then the rotations have to be quicker. The Celtics also just got Kyrie’d last night. He made some ridiculous shots against some tough defense. I also didn’t help that Landry Shamet had one of his best games this season. Adding Kevin Durant to this powerhouse offense is just a nightmare.

The best part of last night was easily just watching Marcus Smart play again. He was able to contribute tremendously offensively, despite his minutes restriction. He looked good physically, doing his usual Marcus Smart things on defense and contributing to whatever the team needed him to do. He dropped 19 points and picked up the slack from Jaylen, Kemba and the rest of the bench, although it still wasn’t enough. When he’s in the game, it just seems like things move smoother offensively. He knows how to navigate the floor and where to find open teammates.

Besides the obvious defensive stuff, here's one way Marcus Smart should really help the Celtics. Jayson Tatum draws a double, Smart cuts to open space, then hits Jaylen Brown in the shooting pocket with a perfect crosscourt pass. Cs need more of that stuff. pic.twitter.com/zCcI8QUFzg

Alright so Jaylen clearly isn’t playing to the level he was in the beginning of the season. He hasn’t been slumping consistently, but him shooting this inefficiently isn’t necessarily “new”. Going 5-23 with four turnovers is brutal. I feel like the whole game you could just tell that he wasn’t in rhythm. The shots weren’t falling, some of his passes were sloppy and he was settling for a lot of tough shots. It could be a mental thing for him, like he’s just coming back from his first All-Star game and three point contest, so things might be pretty weird for him right now. Regardless, I think the biggest problem with him is giving a full four quarters of effort. He had four steals in the first half and was playing aggressive smart defense, then in the second half he stopped being that aggressive. It could be because he was discouraged by his shots not falling so he slowed down his game, but we need that not to happen.

Brown is way off tonight. 1-for-9 and he missed that last one by a mile.

Kemba also didn’t come through for us, but his situation was different. He lit it up in the first quarter, scoring 9 points on 4-5 shooting. He looked like his usual self, beating guys off the dribble and hitting pull-up shots. But then for the rest of the game he took a total of 7 shots, only hitting one of them. In the second half he just wasn’t involved in the offense at all and that needs to change. The second the Nets started shutting him off defensively, Kemba just stopped contributing. It is absolutely crucial for Kemba to stay involved in the offense for three reasons: one is that if Kemba is hitting his shots then good things happen (the Celtics are 7-2 when Kemba scores 20+), two is that for Kemba to stay efficient he needs to have consistent volume throughout the game and three is that he is excellent at running the pick and roll with the centers. Kemba needs to get his touches, man.

Once again, the Celtics got demolished by another team’s bench in scoring, even with Marcus’ 19 points. The sad thing is that I was okay with who played off the bench, it’s just that the way they were rotated wasn’t great. I thought that everyone that came off the bench earned their minutes recently, even Teague and Grant. It’s just that in the beginning of the fourth quarter Brad put in a lineup of Teague/Pritchard/Jaylen/Grant/Rob, which is where the lead got stretched out the most. It wasn’t a great lineup to use considering that none of those players were having their best games. It was tough, but that lineup can work on a good night. We definitely still need an addition or two to stay competitive. My realistic preference is either Harrison Barnes or Thad Young.

Yeah so the game wasn’t great, but we still got some positives in there. Tatum kept us in the game for the most part, Theis continues to be playing his best basketball, Rob Will had five blocks and we got to watch the core four play. Plus the effort was there for the most part. I’ll take what I can get honestly. My mentality towards this team is that I don’t think they are going to win a championship this year, but they will most likely still make the playoffs and have a chance at an ECF run. I mean I never really thought that this was the banner 18 year, but from how things are going this year it’s best to just not have those expectations. There’s still a future here, but this team needs to make some changes to be a title contender, and those changes probably won’t happen this year. But hey, the Celtics have the second easiest schedule in the second half and for now they are healthy, so let’s just see what happens and enjoy the ride.

Marcus Smart: "Our effort was there, and I can live with a loss when our effort is there."