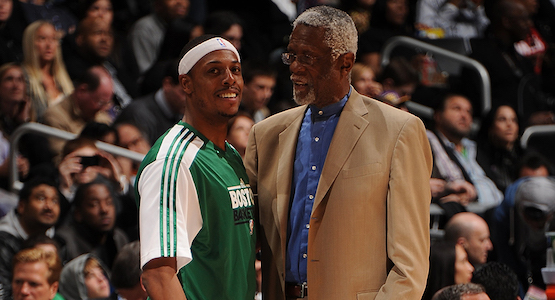 The NBA (Naismith Memorial) Hall of Fame is the most prestigious award for retired basketball players and coaches. If you’re a legend of the sport, you are bound to have your name appear on this list - or at least to be nominated for it.
This is the case for two Boston Celtics stars, Paul Pierce and Bill Russell. These two legends have finally made it to the nominations list and we have waited long enough. Now, all we need is for the NBA to make the right decision.
Naismith Memorial Basketball Hall of Fame
Also simply known as the ‘NBA Hall of Fame’, this basketball hall of fame is located in Springfield, Massachusetts. It is the oldest and most complete library of basketball history, including a wide range of contributors to the sport.
The hall of fame started in 1959, but the building where it is found today was only opened in 1968. It was named after James Naismith, a Canadian-American physical educator who invented the game of basketball and started the University of Kansas’ basketball program.
Understanding Basketball Odds
What a game basketball is. It has so many stats involved, and the bookies take full advantage by giving you an array of betting options both before, and during the games. Plus, you can bet on the outcome of the divisions themselves. Getting the best odds requires a good Oddsmanager basketball website giving you basketball odds offered by different sports betting websites that off betting odds for in-play and pre-match.
Celtics 2021 Hall of Fame Nominees
The Boston Celtics are no strangers to Hall of Fame nominations. The club already has over 30 inductees, including legends like Sam Jones, Bill Russell, Larry Bird, and the latest induction being JoJo White.
In the 2021 list of nominees, the Celtics have two new representatives, let’s take a look at both of these legends in a bit more detail.
Paul Pierce
Of the 2021 nominees, Paul Pierce is the only player nomination. Paul made it through high school and university All-American teams and was the overall 10th pick in the 1998 NBA draft.
Pierce spent most of his career at Celtics, where he earned the nickname ‘The Truth’ from legend Shaquille O’Neal. He was the captain of the Celtics, where he earned 10 All-Star selections and was a four-time All-NBA team member.
His most notable accomplishment is when he formed part of the ‘Big Three’ with teammates Kevin Garnett and Ray Allen. This unstoppable trio led Boston to two NBA Finals, where they finally clinched the championship in 2008.
This is where Paul Pierce earned the title of ‘NBA Finals Most Valuable Player’ - the most prestigious accolade for active basketball players. And now, with his nomination to the Hall of Fame secured, it feels almost guaranteed that the Celtics will have another player make the list.
Bill Russell
Bill Russell needs no introduction. This legend is already an NBA Hall of Famer, so what is he doing on this list? Well, Bill Russell was first nominated for his legendary performances as a player, but this time around he is being nominated as a coach.
After winning the NBA championship 11 times at the Celtics, he became the first black head coach in a major U.S. professional sport. This alone is enough to earn the man indictment, but he went on to have an amazing coaching career as well - winning two NBA Championships.
He is the only player-coach to have won the championship (and he did it twice!). After this tremendous period, he took a break before ending his coaching careers with stints in both Seattle and Sacramento.
Now, all we can do is wait and hope that these two Celtics legends can go the distance and be inducted into the most prestigious basketball list - the NBA Hall of Fame.