The Celtics played their last four games going into All-Star break with pride! 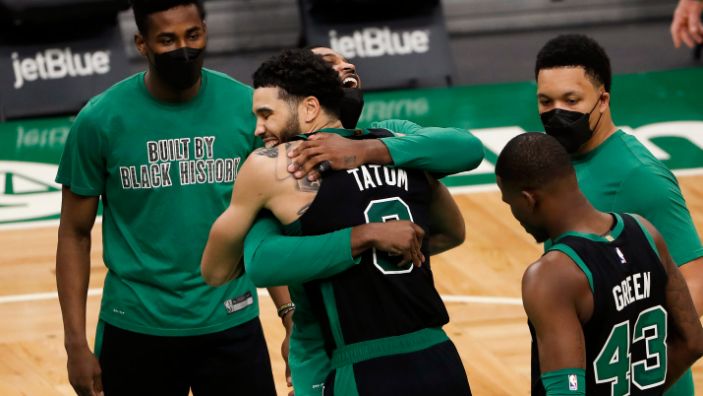 A merciless first half of the season comes to a pleasant end for the Cs. After the Celtics battled for their fourth win in a row against a damaged Raptors team, us Celtics fans can go into the All-Star break with a sigh of relief. Screw it, banner 18 is back on! Nah, just kidding. This probably isn’t our year, but hey at least the Celtics are back in a playoff spot and have a winning record after all the shit they have been through.

In those four games they did what they needed to do and finished the first half with some pride and confidence. Before those four games, I said that I would be surprised if they even went 2-2 with the schedule they had, yet here we are. This wasn’t the toughest stretch of games in hindsight, but by the way things were going before the final stretch, winning games seemed impossible to the Celtics. So what changed during the four game span that made them successful?

The biggest thing to me about winning the last four games was their ability to close out games in the clutch. The last four games were considered clutch games and the Celtics came out victorious. For anyone that doesn’t know, clutch games refers to the final five minutes of the game when the score is within five points or less. The Celtics have played the most clutch games this season (24), but are in the bottom 10 in net rating (-6.8), offensive rating (102.2), true shooting (53.4%) and hold a record of 11-13 in those situations. These stats were accumulated after the Celtics last four games, so imagine how bad their clutch stats were before these four games. Regardless, it's nice to see them win some close games going into break.

Jayson Tatum. Made for the big moments. (via @celtics) pic.twitter.com/QE4HuPkcWq

One of the things I mentioned in the previous article was how important it was for the Jays to shoot consistently well and perhaps shoot well on the same night. Yeah, that didn’t happen. During the span Tatum shot 42% and Jaylen shot 46%, both below their season averages. But it ended up being fine because they at least got the job done when they needed to. We saw when Tatum dominated the end of the Wizards game and Jaylen helped put the Raptors game away scoring 11 points in the fourth quarter. They had their part, but the real reason for success was all-around contributions from the rest of the team.

One of the narratives around the Celtics this season has been the inconsistency of Kemba Walker. Well he easily could've been the best Celtics player during this stretch. Over these games he averaged 23 points and 6.5 assists, shot 43% from three and got to the line 5 times a game. He dominated against the Pacers, had eight assists in the fourth quarter against the Wizards and consistently hit shots when the Celtics needed them. A healthy and locked in Kemba is obviously crucial to the Celtics success. He'll have his struggles here and there, but it's good to see him shut up the haters for a little bit.

Kemba Walker has had a few plays over the last couple of weeks where you say "He's back!". They've been hard drives or stop-on-a-dime pullups. This one, where he rejects a screen to get himself the jumper should be added to the list of plays where you can see Kemba is back. pic.twitter.com/tIVK5dUbqV

The contributions from the role players were probably the biggest surprise. The bench averaged a whopping 38.5 points a game during this stretch, compared to their usual 31.8 points per game (26th in the league). The steady bench endowments were led by consistent play from Robert Williams, Payton Pritchard and even Jeff Teague. Rob Will and Pritchard have been the bright spots on the Celtics bench, but Jeff Teague has been the opposite, until recently. Teague has been able to get to the line, drive efficiently and make some solid passes. That is the Teague we want; no that is the Teague we need. We need those veteran takes and presence in general.

Daniel Theis played fantastic during this stretch and has honestly been great all season. He dropped 17 against the Pacers and then 20 against the Wizards. His ability to be able to shoot from basically anywhere and cover a variety of players has really shown how valuable he is to the team. Thompson also did his part, averaging 9 points and 7.5 rebounds, while he also stepped it up on the defensive end in my opinion. I also just want to throw in how confused I am on the Nesmith only playing 7 minutes in the last four games combined. I thought he was doing well, but I guess Brad thought otherwise.

Speaking of defense, it wasn’t really there during this stretch. The Celtics posted a defensive rating of 117 during their last four games, compared to their mediocre 111 defensive rating on the year. The Celtics won’t be able to win games playing this poorly on defense, they aren’t the Nets. Hopefully when Smart gets back the Cs will step up their defense.

With the first half of the season being over, there are still a lot of questions about this team. Will they make a move at the deadline? Will they fall into another bad slump? How are the rotations going to end up? Can this team go on a legitimate run? I mean this team hasn’t been able to stay healthy all season, so I feel like we don’t know what they are actually capable of yet. For now, I’m looking forward to watching our guys compete in the All-Star game and am prepared for the combination of success/pain that the Celtics will bring to us in the second half of the season.

Jeff Teague: "I’m glad our team is playing well going into the break. Just try to keep that momentum going as soon as we get back."