It's trade deadline season. A lot of us love trade rumors or trade discussions. Some hate it and can't wait til the deadline has passed. These "WOULD YOU's" are definitely for the first category of people. As always if you believe Boston is giving up too much/little in a WOULD YOU, reply with what should be subtracted/added.

Rival executives say Marvin Bagley III is up for discussion in trade talks, per @TheAthleticNBA pic.twitter.com/X9JJChKXG1

The Sacramento Kings selected Marvin Bagley III over Luka Dončić in the 2018 NBA Dradt, so them trading him now isn't the best look, but they have new people in charge, so they can just blame Vlade Divac who passed on Luka for Bagley. The 21 year old has a ton of skills, but he's been injured a good deal and his effort has been questioned.

I'm not going to blame Bagley for comments his father has made, so I won't call him an off the court problem, but I can see the Kings wanting to unload him. Due to his age and potential they won't just give him away.

If the Celtics veterans like Kemba Walker, Tristan Thompson, and Marcus Smart can motivate Bagley he could be a much cheaper modern big man option to John Collins. Collins will cost more in assets to acquire and salary moving forward. Bagley's salary is set to be $11.3 million next season and jumps to $14.7 the following year. 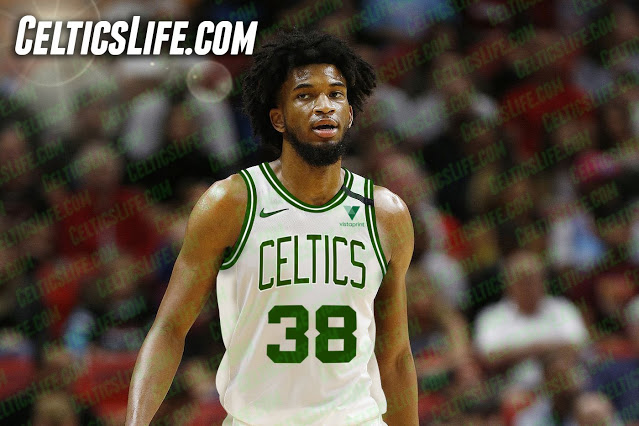 Depending on what you think of Bagley, his contract could either be team friendly or you could see the Kings wanting out. Persoanally I think if he was a free agent this coming summer he'd definitley get a 2yr/$26 million dollar offer, so I think his contract isn't bad at all. Then again I think Myles Turner would get the money he makes now and then some as a free agent and if you belive the narrative that teams didn't want Myles because of his contract then you might think the same for the less accomplished Bagley.

With Bagley it's all about POTENTIAL. If you see him having a decent chance to be the modern big man star next to the Jay's, you go for this. Like Steph Curry and Klay Thompson needed a Draymond Green to make that team special.

Now if you are confident that Robert Williams will become a star himself, then you definitely say no to this unless you think Bagley will become some All-NBA game changing super star. I didnt' think it was realistic for the Kings to swap Bagley for Time Lord straight up, even though Williams would be a mcuh cheaper option for a franchise that often likes to save money. So I added Grant Williams so the Kings get a second young asset. Whatever you think of Grant, and maybe you value him higher after last night's performance, as a 2nd year player on a team friendly deal who played rotation minutes as a rookie on a contender he has some value.

Also I added Jabari Parker and Carsen Edwards. The benefit for the Kings here is they save a bit of money by dumping. Jabari. The Celtics do get back big man Nemanja Bjelica as well. He's a big man that the Celtics are rumored to be interested in. While a trade for Bagley would be more of a trade for the coming years, swapping Robert Williams for Bagley would give Brad Stevens more positional flexibility with his other bigs Theis and Thompson, since Bagley can play next to either.

Additionally Bjelica is another addition that could both help you depth wise for the playoffs, but also enable Danny Ainge to move either Tristan or Theis at the deadline (Both Celtics centers can become free agents this offseason). Again, Jabari is included more so as a contract dump, but Danny has previously been enamored with Parker, and if he can his 3pt shot back to what it was in Milwaukee the still young forward could be a nice back-up 3/4.

Your turn. Would you?