If you want Boston to trade for a player without giving up anyone you like, Evan Fournier might be your best bet 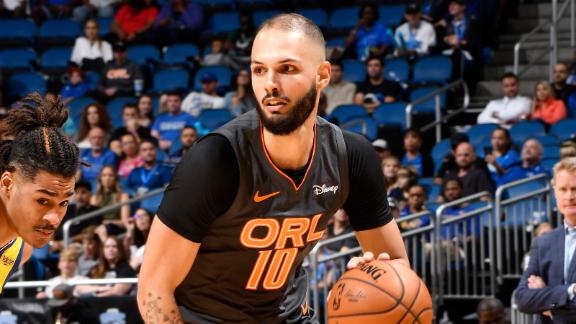 If we bring up a big name as a trade target, it does a disservice to not include any players Celtics fans like in the potential cost. Because guess what, those are the players the other teams also like and ask about. But if you want Boston to trade for a player without giving up anyone you like, Evan Fournier is likely your best bet. Shams Charania listed Fournier as a "potential" Celtics target. Now that is a step down from "reportedly interested in," but I'm sure most GM's talk all the time, so Fournier's name undoubtedly has come up between Boston and Orlando.

The 28 year old forward is in the final year of his multi-year deal. He's averaging a career high of 19 points per game and shoots 38% on 3's. Now here's the rub. Boston has seen many players walk in free agency the past few years and Danny Ainge has said he's not trading for someone who they may lose in the offseason. Adding a John Collins makes sense, because you can match any contract offer he receives and he's a very good young player that you'd be silly to not pay.

Orlando would take a 1st rounder for Fournier, but trading a 1st for a rental makes no sense. Especially considering the fact that while Fournier would make an excellent edition to the Celtics, he doesn't make them an instant contender. Also keep in mind that all the favorites of Celtics fans, Jaylen, Jayson, Marcus, Time Lord, and Pritchard were all once just faceless future 1st rounders. Not being good is one thing, Not being good and not having your 1st rounder to get better is much worse.

Could Boston re-sign Fournier this offseason? Yes. He'd cost a lot, but if they felt he was a core piece they could retain him. But there is the Marcus Smart elephant in the room. Fans don't want to trade him, but they also want Danny to add someone good. Problem is if you "just trade picks" for a player who will make good money then you're potentially shutting the door on retaining Marcus. Yes you could potentially move Kemba this offseason, but you'd be taking some contracts back. And even when those contracts come off the books, if you're already paying Jaylen, and Jayson, Fournier well and choose to re-sign Marcus, well that's your team then. The rest of the guys will all have to be lower salaried players. Unless Payton Pritchard becomes John Stockton or Time Lord becomes Rudy Gobert that's not a championship roster.

Maybe I'm being overly optimistic here, but maybe the solution would be for Boston to put some serious protections on the 1st rounder. One of those highly protected 1st rounders that if it doesn't convey in a certain amount of years it turns into two second rounders. Now if another team offers a 1st with no restrictions or less, then that option goes out the window. But sounds to me like no one has offered a 1st. Could be because other teams are pursuing bigger fish right now and don't want to part with a 1st they could use for a guy like Collins, but Fournier for sure is attainable.