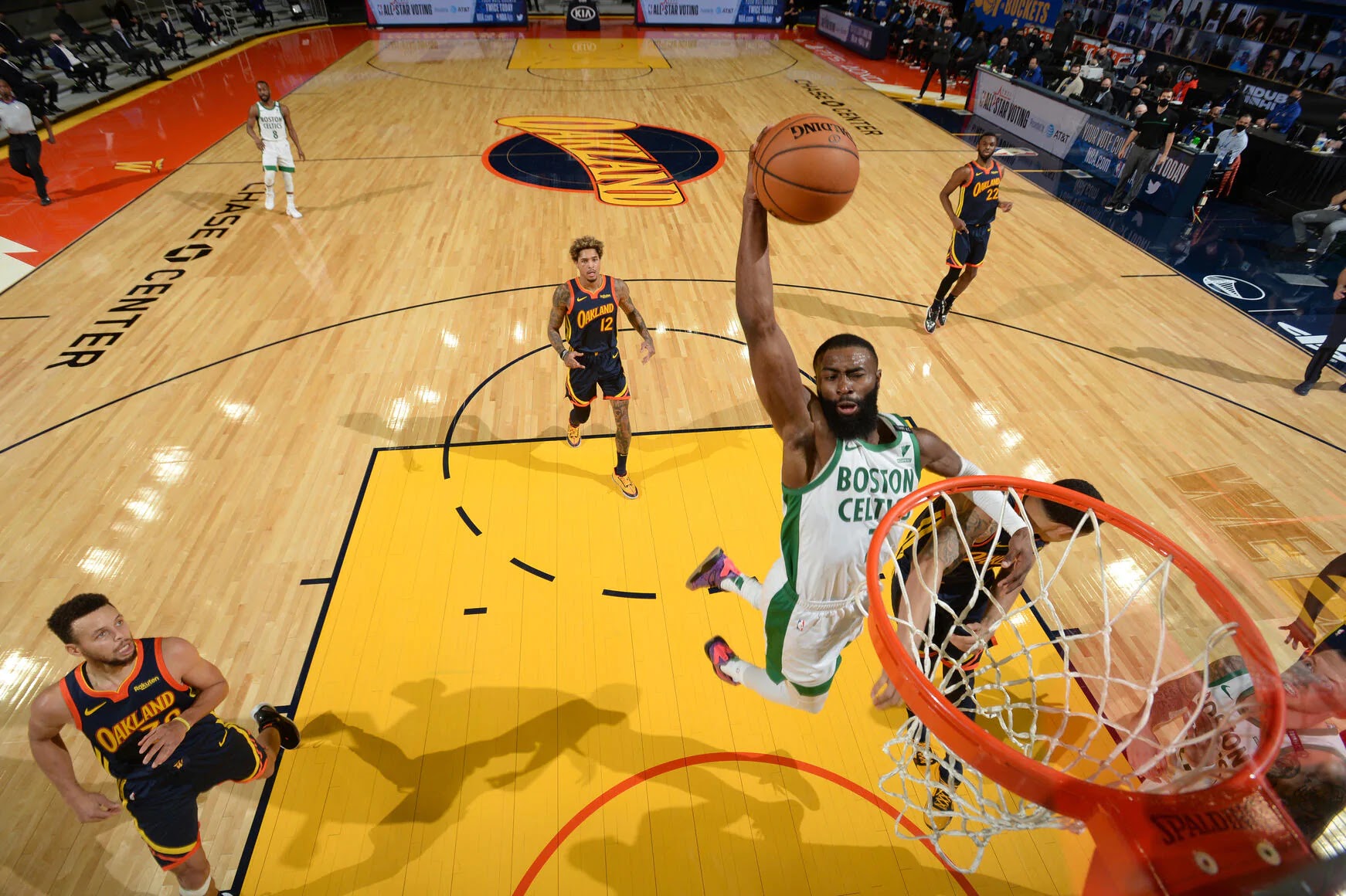 Week seven of the NBA season was a roller coaster for the Boston Celtics. As fans, we saw the good, the great, and the bad in the matter of four games as they went 2-2. This week we saw the first four games of a grueling five game west coast road trip in which all five games were/are against either the top of the west and three teams fighting for a playoff spot. They started off the trip with a four point victory over the Golden State Warriors in a game where Jaylen struggle with the three ball and Steph Curry was, well..... Steph Curry. Then they fell to the underrated Sacramento Kings where De'Aaron Fox showed us why he's a star in this league. Game three of this stretch was against the LA Clippers and Jayson Tatum remained the king of LA in this wire to wire thriller with 34 points in the victory. The week was finished off with a day time dud on Super Bowl Sunday against the retooled Phoenix Suns. Jaylen Brown missed the last two games against LA and Phoenix, though Stevens has said he is trending up. Here are my takeaways from the week;
Jayson Tatum is nearing his first triple double- Wednesday against Sacramento, Tatum posted a line of 27pts, 10ast, and 9reb. This game had the perfect storm for a potential triple double performance as Boston was without their three best ball handlers in Kema, Smart, and Pritchard. That being said, Tatum has shown a big improvement in his passing and decision making this season even though he's not posting tons of assists nightly. In the playoffs last season he was way too selfish and resistant to trusting his teammates in certain situations and it not only hurt him but mostly the team. This season he has more trust in his teammates to knock down shots and has shown that he's willing to pass out of a decent shot for himself if it means the team will get a better look at the basket. This week, that newfound skill has been on display in big ways. Late in games, Jayson has been driving to the basket more often rather than settling for mid range contested jumpers or threes and oftentimes on those drives he draws defenders and kicks it to a shoot or hits a big on a roll for an open layup/dunk. Next time Kemba sits while smart is still out, the triple double watch will be back on. That could come as soon as this Friday against the Pistons on the second night of a back to back.
Carsen Edwards may be a sparkplug in games where others struggle- Jeff Teague thus far has struggled mightily on both sides of the ball and basically in every facet of the game which initially gave Pritchard his time to shine, and this week was Carsen's turn. He's been playing well in small moments throughout the season, but we got to see what he could become in the Clippers game when he dropped 16pts off the bench on 5-8 shooting. He was also 3-5 from three including a big transition pull-up in traffic. Brad Stevens rewarded Edwards for his efforts by injecting him into the starting lineup for the Phoenix day game. Carsen's minutes in relation to Teague's will be something to monitor moving forward.
Payton Pritchard is back!!- P-Rabbit made his return against the Clippers and posted 8pts off the bench. As pointed out by Stevens after both his games this week, Payton was a little timid to start the games but picked it up throughout. His shot looks just as good as its was pre-injury and he doesn't seem to have missed a beat. Within a couple more games with Brad's encouragement I'd expect him to regain his early game confidence and continue his impressive rookie campaign.

Brad Stevens on Payton Pritchard's return: "I thought he looked a little timid, so I told him to shoot it. Next play, he jacked one up right in front of me and made it. So he's a good listener."

Kemba Walker needs to get his shot back and but hie IS important to this squad- Kemba has been the scapegoat for Celtics fans when they lose since he's been back from injury. In my opinion, Kemba looks like he's back to his old (younger) self in terms of his agility and having his elite first step. His quickness and ability to cut is 100% back. While not being a great defender he has shown that he can be an on-ball pest and has quick hands/reflexes. His shot on the other hand has not been great. While he did average 19ppg this past week, he did that on just 33% FG shooting and 33%3PT shooting. Both of those are massive declines from his last year and career averages. He still has only played nine games, so he should be given a few more games to get right. That said, he really needs to kick it up a notch if Jaylen is going to be missing time here and there with his nagging injury. Even during a pretty bad statistical week for Kemba, he still showed that he is mega important and can be that closer down the stretch if Jaylen or Jayson are off. Though not a perfect stat, only four Celtics posted positive plus/minus in the fourth quarter this past week and Walker was one of them. He averaged 7 points in the fourth quarter in those four games on 43% 3PT shooting and really led the way against LA to help seal the victory. Against the Clippers he scored 10 of his 24 points in the fourth quarter. Kemba getting back to last season's form will be an important factor for this team going deep in the playoffs, and NO, he is NOT going to be traded. Nor should he be traded.

Tristan Thompson has turned a corner!- The C's newest big man averaged 11.8pts and 9.3reb this past week which was a pleasant surprise to see him finally come alive and return to his Cleveland form. JR had a nice piece on this HERE.

Lets check in on the standings situation after week seven. In last weeks review, Boston was in 5th place to end the week and three games behind Philly for 1st place. A week later and the C's are 12-10 and up to 4th place but have lost a game in the race for first and are now four games behind Philly. Up next, Boston gets the leagues best record Utah (19-5), Toronto (10-13), Detroit (5-18), and they finish up at Washington (5-15) for another dreaded day game on Sunday. The C's should finish the week at worst 3-1 to hopefully improve to 15-11, but they play the best record in the league and the other three teams have all played Boston close this season so it is not out of the question that Boston could end up splitting this week though disappointing.