Has Tristan Thompson turned a corner? 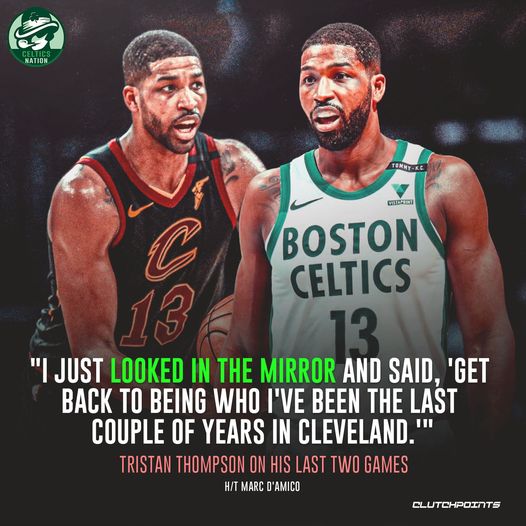 Following his second straight solid game, Tristan Thompson says things are starting to click for him. He says he looked in the mirror and convinced himself to be the player he was in Cleveland. I really want to believe this. I mean he doesn't turn 30 for another month, so its not like he should be in full regression mode. That said, Thompson in Cleveland wasn't always the best Tristan either.

Tristan had a solid rookie campaign and then even better 2nd and 3rd seasons, but then his numbers went down the next four seasons. It wasn't until the past two years where he had a renaissance. And of course those were on two brutally bad Cavaliers teams. So hate to say it, but the jury is still out on Tristan Thompson the player. He was able to contribute to those LeBron led Cavs teams so he has name recognition, but a look at the numbers show that his slow start in Boston should't have been an unexpected possibility.

The fact that the Celtics are playing a lot of 2-bigs line-ups when it's very difficult to swing that in the modern NBA is a viable excuse for Thompson's numbers. Ideally he should be on the court almost exclusively as the sole big man. He should only be guarding big men defensively.

So has Tristan turned a corner or should we expect peeks and valleys the rest of the way? My guess is as long as the Celtics are playing Time Lord and Theis as well, that we will have those valleys thrown in there. I do think that Thompson is better than the player we've seen these first two months and that he can help you in the playoffs. Also injuries happen, so you want the luxury of having three quality bigs. Thompson is a better defender than Enes Kanter which will make him much more playable in the playoffs.

Was Thompson a replacement for Gordon Hayward? No. Hayward is an All-Star caliber player who fits great in a position-less NBA. Was Thompson a better alternative than Myles Turner? No again. Thompson was the consolation prize after Danny held out too long on the Hayward for Turner/McDermott/1st trade. He was also a less expensive alternative which owners like. Thompson was the upgrade on Kanter. As soon as you accept that your expectations will become more in line with what he can give you.