The King of the Fourth is back playing basketball 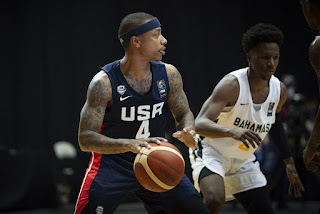 That’s right Celtics fans, the little guy is back playing professional basketball. While it isn’t for the Celtics and it’s not in the NBA, Isaiah Thomas was back playing his first competitive basketball game in over 12 months. Thomas is playing for Team USA in the FIBA AmeriCup qualifying tournament, as he continues his redemption tour.
Thomas scored 19 points on 5-9 three point shooting, and grabbed 4 rebounds with 2 assists in the game as Team USA beat the Bahamas 93-77 to improve to 5-0 in the qualifying tournament. This is a great sign for Thomas, as his difficulties since his hip injury in Boston completely altered his career and performance. Thomas has been adamant throughout much of this season that he finally feels fully healthy, and this performance could be the start of his push back into the NBA. If he keeps this play up, a roster spot on an NBA team that needs scoring off the bench could open up after NBA Trade Deadline in March. And while it likely won’t be on the Celtics, I think it’s great to see Thomas look like the player who was a 2-time All-Star in Boston.

Isaiah Thomas had 19 points on 7 of 15 shooting, 2 assists and 6 turnovers in Team USA's AmeriCup win over the Bahamas.

Oh, and it just happens to be the six year anniversary of the trade with the Phoenix Suns that brought IT to Boston, so maybe there’s just something in the air on this day for Thomas. Crazy to think that it was already five years ago that Thomas arrived, but hopefully he’s back in the league soon.
Thomas is playing with former Celtics Brandon Bass and Joe Johnson on Team USA, so while Team USA has already qualified, it’s cool to see these former Celtics show that they can still play as they attempt to get back into the league. Bass finished with 12 points and 10 rebounds for Team USA, while Johnson had 11 points, 9 rebounds, and 6 assists.

.@isaiahthomas on what it felt like to play today #AmeriCup 🏁🇺🇸 pic.twitter.com/RlVqVQ7hhp