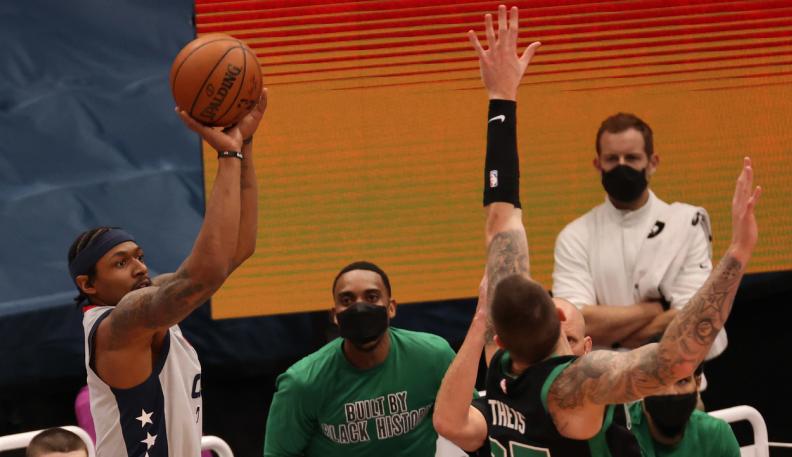 There are a lot of noticeable issues from just the eye test after watching this game. The star players look exhausted and are desperately looking for help from the supporting cast who cannot consistently provide points. Players look lost on both ends of the floor; this really seems like a coaching thing like guys are getting burned on simple cuts to the baskets and have no communication on screens. I mean what is this shit:

Let’s take a quick look at some of the stats from this game before the scrubs came in at the last 5:56 shall we? The Cs shot 35% from the field, 23% from three, 12/24 from the free throw line, 17 turnovers and only 12 total assists. The Wizards blew open this game in the third quarter, where they went on a 20-6 run from 10:18-6:08, against our starting lineup by the way. The Wizards only shot 39% from the field, but they dominated from the free throw line (31/36) and their defense got the Celtics shook apparently. Oh and Bradley Beal dominated us once again.

Jayson Tatum had his worst game of the season by far with six points on 3-14 shooting, except he gets a pass today considering he balls out basically every game with little help. The only good thing about today was that Kemba looked good, but I’ll take that with a grain of salt because it’s still the Wizards.

Brad Stevens on Kemba Walker: "He played with some heart in a lot of situations tonight, and was the loudest voice on the team all afternoon."

There are no excuses for what happened this afternoon against the Wizards. The Celtics made them look like an actual good team. The Wizards were swinging the ball around with ease, forcing turnovers all game (eight in the third) and making the Celtics look pathetic on all ends. To me I look at this team and I don’t see much change in this roster compared to this year’s roster, yet the Celtics rarely lost games like this one and the Knicks game. I really hate to say this because I do like Brad Stevens, but isn’t it starting to look like Brad might be the problem here?

Sure, the arguments for Danny Ainge having to take some heat for not being able to surround our star players with solid role players looks valid right now, but it’s too early in some of these players careers to be able to tell. Brad is way more to blame than Ainge in my opinion. After losing to the Pistons last game, how can you let your team come into this game with such low energy? A good coach who is able to discipline their players wouldn’t allow for this to happen. Also what happened to some of the strategies that were working? I’m talking about the zone defenses, the baseline cutting, the circular offense in the paint? It literally looks like Brad has no strategy on either end of the floor sometimes. He might be too Laissez-Faire for this roster, I don’t know. They just look so undisciplined.

So where do the Celtics go from here? The season is still young and I want to say that once they get healthy everything will be fine, but they just do not look like a good team. It has become painfully obvious that we need to acquire a player at the TPE deadline and it needs to be a player who will actually make an impact. Ainge is being scrutinized more than ever right now so it’s important that he hits on the TPE.

This sure seems like rock bottom for this team, losing to the two worst teams in the Eastern Conference to fall to .500. But who knows, maybe things get worse. At this point literally anything can happen with this Celtics team. There is no consistency, no team identity and I just don’t know what is going on anymore. I still believe in this squad to get better eventually, but it seems like something needs to change. Hopefully things will be better when we can have a healthy core for more than 28 minutes.