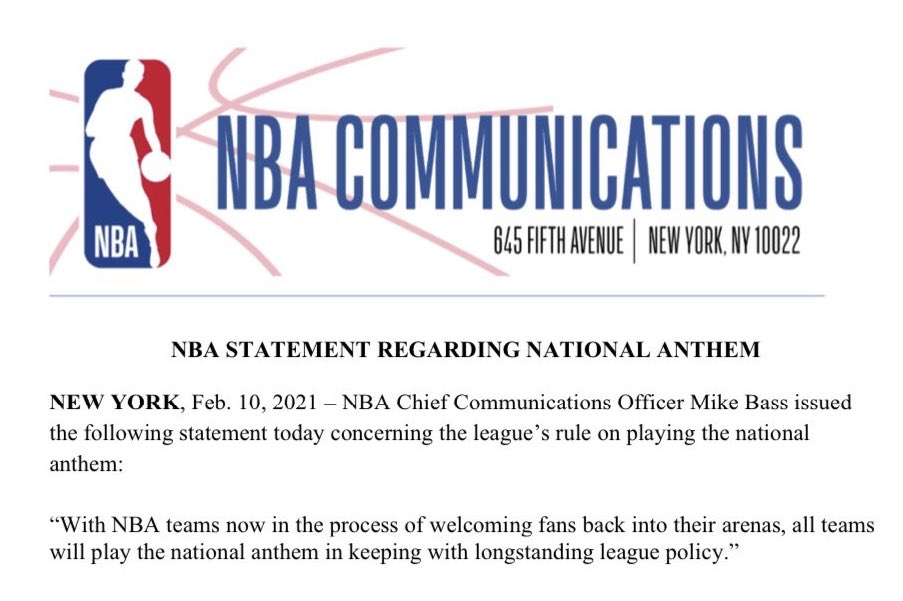 Well that didn't take long. This morning we wrote on how The Athletic exposed an interesting happening (or "non-happening") that has been taking place in Dallas this season. The Mavs haven't been playing the national anthem prior to games this season and no one has mentioned this until The Athletic asked amrk cuban about this following their first game with fans.

Of course if you'll recall, the national anthem and the NBA was a big story politically during the Orlando bubble. The NBA had to be aware of the Mavs’ policy this season and seemed to be fine with it when The Athletic inquired with them, but they have either reversed course now or are finally weighing in with a decision.

Mark Cuban was quick to respond that he is fine with the directive.

Mavericks owner Mark Cuban to @NYTSports on the league's decision to mandate the playing of the national anthem before games: "We are good with it."

For Cuban he ends up getting political points for at least trying to remove the anthem and likely points from his players as well. And he doesn't have to decide on kowtowing to any future public pressure from fans on the other end of the political aisle to bring back the anthem, since the NBA made the decision for him. Expect this issue to come up again sometime in the future when either players bring it up or another racial incident in America has players using the anthem as a vehicle for their social protests.

This. If players want to force something, they have some leverage to do so if they are willing to give up money.

NBA owners & Silver are like a condo association. They don't want 1 owner changing policy on his own. They are likely pissed at Cuban for bringing this topic back up https://t.co/fginfiJtaa

Should the national anthem be played prior to American sporting events?

Cuban has realesed this full statement:

I give Cuban credit here. Regardless of how you feel about the anthem, it seems like Cuban was willing to do something that wouldn't be popular with many of his fans and might get him in trouble with the NBA, but made the decision that risking those things were worth it for the sake of dialogue.