Celtics embarrassed by Pistons in Boston 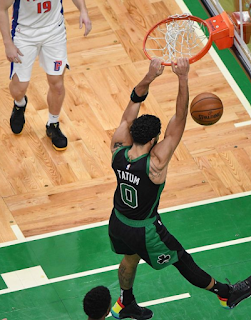 The Celtics fall to 13-12, just one game over .500 after losing to one of the worst teams in the NBA 108-102 for the second time this season. I know some fans will use the back to back excuse, or the fact that we're missing Kemba and Smart, but this team shouldn't lose to a team like Detroit. Pistons came into this game 1-11 on the road, and now improve their record to 7-19.
The Jays led the way for Boston of course. Jayson scored 33 while adding 11 rebounds and 7 assists to come pretty close to a triple-double. Jaylen pitched in with 27 points on 11/21 from the field. Together the Jays combined for 60 points, and didn't have much help tonight. Aside from the Jays, Daniel Theis is the only other player to score 10+ for Boston. Theis had 11-9 to finish one rebound away from a double-double.
Saddiq Bey destroyed us on the floor tonight. He had a double-double with 30-12 as he knocked down all 7 shots from behind the arc. Blake Griffin had 12 points and 6 assists this game. Blake has still not dunked since 2019 which is a pretty crazy fact since he was mostly known for his in-game dunking, and his performance in the dunk contest. Jerami Grant, who is a candidate for the MIP award this year, had 15-5-3 in this victory for the Pistons.
The Celtics are banged up, it is the second night of a back to back, but this team just doesn't have it. They don't play the typical Celtics basketball we're used to. It is very frustrating to watch and I understand how hard it is to win games with two starters out, but the Celtics should not be losing to the Pistons and having Saddiq Bey score 30 on them under any circumstances.
What a frustrating season this has been, but the Celtics will try to turn things around starting Sunday as they take on another bad team, the Washington Wizards. This one should be a win. That game takes place at 1 o'clock in D.C..
Read more from George Dimis HERE!
Follow me on Twitter: @GWDimis