Is Kyrie Irving partying in Toronto with Drake? 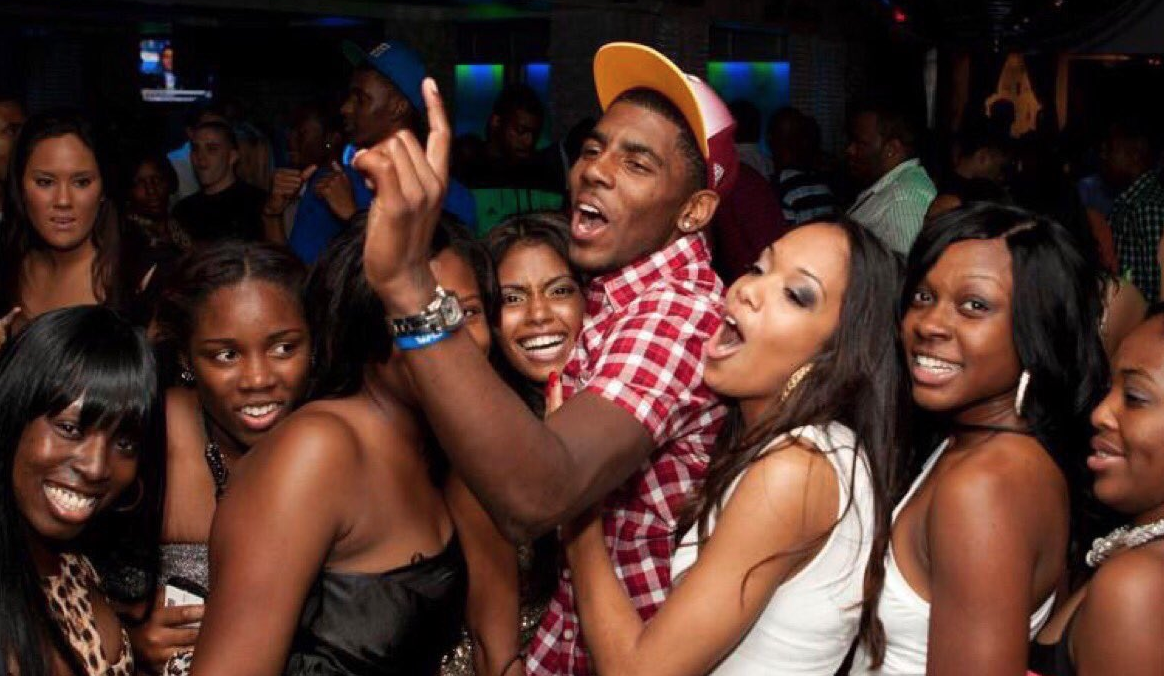 I'd rather we not have to talk about Kyrie Irving anymore. As a fan, I gotta admit I have a complicated relationship with this guy. Early in his Celtic tenure, I frequently poked fun at his flat-eartherism and conspiracy theory nuttery. I created games comparing his quotes to Jaden Smith. I edited together a dance video intentionally set to Daft Punk's "Around the World".

Even after Danny Ainge was setting wedding dates, I was was out there speculating he'd still probably end up in New York with Durant (though I guess I picked the wrong hat):

That said, I've done my fair share of defending the man. I truly feel on some level he was unfairly scapegoated as the core problem of an overloaded Celtic roster dealing with "too many mouths" syndrome. There was a lot that went wrong in 2018-19 beyond just Kyrie Irving.

I'd honestly rather we move on from this dude, but this latest situation is almost too weird not to talk about.

Officially, Kyrie is set to miss his 4th game for "personal reasons".

There's no clear answer on what those "personal reasons" entail. There's been lots of speculation from fans. Some have wondered if Kyrie was in the process of "protesting the recent protests". As in, he was sitting out games in response to the recent events at the Capitol. Though, admittedly, if that were the case it would be strange for him to not make public comments on the topic.

Others have wondered if Kyrie was concerned about getting COVID. Some even going as far as to speculate that Kyrie foresaw this recent NBA outbreak utilizing his third eye and was making a statement by sitting out.

Many Nets fans, still in denial about this man's known quackery, have asked to give Kyrie the benefit of the doubt. Perhaps he's dealing with a family emergency of some sort.

It appears that even people around the Brooklyn Nets are unclear of exactly why Kyrie is sitting out and currently off the grid. Coach Steve Nash has made it clear he doesn't have any updates on when he'll be available. Some, like Kevin Durant, have made comments sending him well-wishes and prayers:

“I won’t speak on Kyrie. I’ll let him do that for himself,” Durant said. “I’m sure you guys will see him soon whenever he comes back and we support him 100 percent and pray for the best.”

This evening many on twitter began claiming that Kyrie is partying it up in Toronto with Drake based on an instagram video showing him celebrate his sister's 30th birthday:

A post shared by Gossip Of The City (@gossipofthecity_)

The video shows a maskless Kyrie with dozens of other partygoers. Another trending video purportedly shows Kyrie dancing alongside his sister.

Now, it's entirely possible these are old videos, but it's worth mentioning here that, at least according to the internet, his sister's 30th birthday is tomorrow. The general consensus does appear to be that these videos were recorded today with other online detectives finding additional instagram posts showing more pictures from the same party.

I, however, have yet to see any confirmation this is actually recorded in Toronto with Drake. That just happens to be the title given to the post trending on reddit at the moment. It certainly wouldn't be the first time false information spread on the internet. People will believe all sorts of crazy stuff online. Ask Kyrie. He should know all about the dangers of basing your flat worldview on instagram posts and web forums. I even saw one person come up with a fringe theory that Kyrie is mysteriously absent, because he's on the verge of being traded in a package for James Harden. Ah yes, the conspiracy nut becomes the conspiracy theory. I'd take some of this with a grain of salt given the heavy travel restrictions in Canada at the moment. More likely this is a party in the NY/NJ area. Maybe we'll eventually see details clarifying Kyrie's situation.

For now, make of this info what you will. I will say... I had to cancel my annual Whistler ski trip, because they aren't currently letting United States citizens across the US-Canada border. If Kyrie is truly skipping out on games to have a maskless super spreader covid party in Toronto, I'd personally find that a little annoying. Regardless of how this ends up playing out, I think we can acknowledge this is some classic Kyrie. Stay woke.

Edit 1/12/21 12:00pm: As I suspected, despite it being the top post on the NBA subreddit with thousands of upvotes, it appears these videos were not actually shot in Toronto. Twitter user "Sherwob Holmes" has done his own investigation and determined they were instead recorded at a club in New Jersey this week:

Meanwhile, according to ESPN, the NBA is expected to do their own investigation, noting:

"The league's COVID-19 guidelines forbid players from going to clubs, bars and lounges. They also ban attending social gatherings of more than 15 people."