Tatum must quarantine due to COVID-19 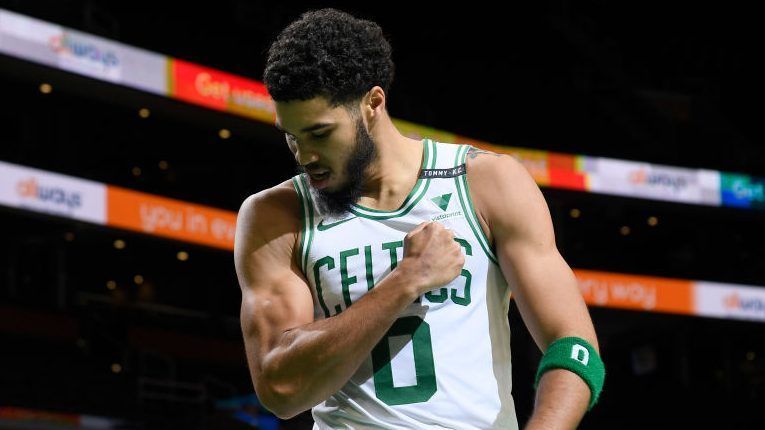 Without three main rotation pieces, the Celtics found a way to beat the Wizards Friday night. They won in a very 2020-21 Celtics fashion, you know, going up by as much as 28 then letting the Wizards come back to make it a four point game in the fourth quarter just to make us fans lose our minds. They hate big leads. Dispise them. But hey, the Celtics are tied with the most wins in the league right now (7) despite all the B.S. that has been happening this season. BUT, COVID-19 just took a direct shot at the Celtics' head, as Jayson Tatum will now have to quarantine for 10-14 days. The Celtics practice facility has temporarily shut down.

Celtics now have 11 players active for tomorrow’s game against Miami. Minimum is 8 players to be able to play. https://t.co/RGfyKv5uCI

The minimum amount of players that a team can play with is 8 and the Celtics are down to 11. The 76ers are in a similar situation. Teams shouldn't have to deal with this type of situation, but that's the risk of having a season this year. It stinks but unfortunatley the only thing they can do is keep playing with what they have. Now they have Tatum, Thompson, Grant and Rob Williams, Langford and Walker out for at least the next three or four games. Losing Tatum is the biggest blow to the team obviously considering his role on the team. He leads the team in minutes, points, shot attempts, usage rating and he is probably the most impactful player on the floor. With Tatum out there, the Celtics have been able to overcome some minor things this season, but playing withot Tatum and other key rotational players will be their biggest challenge. But then again, never count out the hospital Celtics.

So what do the Celtics do now exactly? Their schedule for the next two weeks goes like this: MIA, @CHI, ORL, ORL, NYK, @PHI, @PHI. The good thing is that the first few games, besides the Heat game, are teams that are a little less threatning than the beginning of the Celtics schedule. By the time The Celtics play the Sixers, hopefully everyone besides Tatum and Langford will hopefully be back, even Kemba possibly. But the bad news is that even with everyone back, the Celtics gameplan will have to change a good amount with the abscence of Tatum.

Brad Stevens says that Kemba Walker looks right now the best he has as a Celtic for his entire tenure here. https://t.co/CGj7RuQFQj

Cool. We will take a Kemba 2.0 version of the Walker we saw the first half of last season. 👌 pic.twitter.com/RQAkb20fgt

As far as the starting lineup goes, I see two decent options: Pritchard or Teague/Smart/Brown/Semi/Theis or Smart/Green/Brown/Semi/Theis. The Celtics can't even do a double big look because then the team won't have a backup center (lol). The team focus right now should be on the defensive end. The team is obviously without some key offensive players, but the Celtics could still be a great defensive team. Before the team got hit with COVID, they were able to subconciously slack on defense because they had so much talent on offense. The talent has now dwindled, making defense all that more important. There will probably be more zone defense to preserve energy and because the Celtics won't always have the best matchups with such a dwindled roster. We saw the Celtics run zone against the Wizards on Friday, with Tacko Fall running the paint.

TACKO TIME! A quick thread of my favorite plays from the big fella.

You've probably seen the block on Westbrook by now. Two notes:
1. This was Tacko's first play in the game!
2. Watch the whole clip. He runs the floor, which draws the defense to open up the three for Brown. pic.twitter.com/3op2Uqqwqu

Offensively, the pressure is going to be on Jaylen, Smart and Brad Stevens. Luckily, Jaylen looks like he has brought his game up to the next level, so it will be interesting to see how he handles being the pure number 1 on the team. Jaylen is fourth in total points scored in the league (263) and second in field goals made (103). He is going to get doubled more without Tatum on the floor, so I assume he wouldn't be able to get to his spots as easily as he has been before. That's where Brad Stevens comes in. For the most part, Brad was able to let the Jays do their thing because they have been too much to handle for teams. Now Brad needs to go to the drawing board and figure out what will work best for the team he's got. The Celtics don't have the luxary to have at least Brown or Tatum on the court at all times so Brad will have to draw up a more balanced offense. It will still be focused around Jaylen, but it will be more about getting player open looks rather than having star players do their thing. I expect Jaylen to score more points, but at a less efficent clip.

Smart has already had to increase his role in the offense, due to the abscence of Kemba. Now he has to take it to yet another level. He has had a pretty tough stretch of games lately but we're going to need him to pick up the slack and become a number two scorer, while also running the offense and still keep up his defensive efforts. I know, it's a lot for him to handle. But Smart is the leader of this team and this is where the team needs a leader. He's been able to score efficently in the past, we just need him to do that again. What we need from everyone else is just to hit the open shots and to not commit stupid turnovers. Players will get their open looks at threes and layups, they just need to be efficent and be smart with the ball. I expcet guys like Pritchard and Teague to have bigger roles in the offense. Plus we will get more Tacko time and perhaps Nesmith will finally have his shot to make his mark.

Look, this sucks. There's no argument to say otherwise. But I honestly don't know who to blame here. Part of me thinks that most of the blame should go to the NBA because they probably knew what the risks of playing outside of a bubble, but wanted a season to happen because they wanted to make money. At the same time though, I feel like the players also knew the risks of playing outside the bubble and should've fought harder to plan a safer season for everyone. Regardless of who is to blame here, this situation happening should've been in the back of everyone's head. This was going to happen eventually and it's unfortunate that it's happening to the Celtics. But The Celtics are 10 games in and have been through so much shit; playing without Kemba, having a lot of close games and now all this COVID stuff. Yet, they are 7-3. If I know this Celtics team, these are the type of things that will make them stronger moving forward. Hopefully COVID-19 doesn't completely take over.

They may not win it all this year, but after a slow start to the season, Covid is moving up the NBA standings.