Celtics whooped the Cavs, but can they bring that same energy tonight? 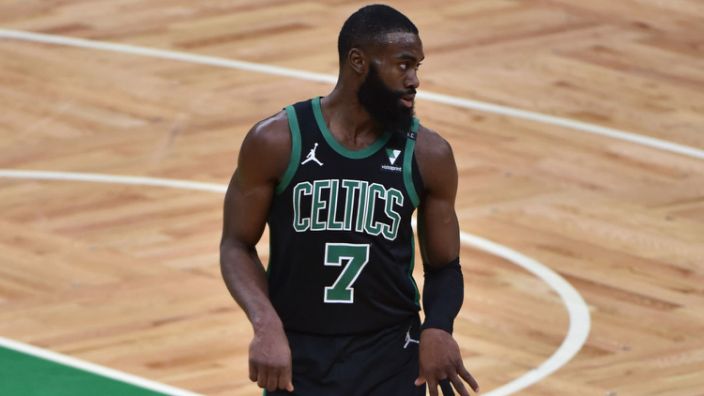 Jaylen Brown: “We needed a win.”

Well, the Celtics brought the energy last night. It’s been a rough few games and you can clearly tell that they were tired of getting their asses kicked. They really needed a win like this and it made it ten times better that they beat the current #2 rated defensive team in the league, who also just beat the Nets two times in a row.

Like I said in my previous post, the lows are real goddamn low, but the highs are really high. Last night against the Cavs was actually kind of a historic night. I’m sure you’ve all seen already that Jaylen scored the most amount of points in under 20 minutes. He scored 33 points in 19 minutes, off of 13-20 shooting, coming off a game where he scored 42 points by the way. It was an incredible performance, but Jaylen scores so efficiently nowadays I couldn’t even tell that this performance was that much different. His offensive development has been insane. He can score from wherever he wants now, he’s patient with the ball, he has an insanely diverse bag of skills, he’s unstoppable in transition, he's good at reading defenses, I could go on. One of my favorite things about him is that he makes mid-range shots look so cool. He’s really making that jump that we wanted him to make.

Marcus Smart on Jaylen Brown: "He's one of the best young players in the game. I'm very proud of him."

This game was also one of the Celtics best overall performances of the season. The scored a season-high 38 points in the first quarter and a season high 73 points at half. As we know, playing a full four quarters of basketball has been something the Celtics have struggled with this season. Well last night they came into the second half with their highest scoring quarter of the season, with 41 third quarter points.

Boston's 41 points in the third quarter mark the first time the Celtics have reached the 40-point mark in any quarter this season pic.twitter.com/A0MOL9S0Hg

The offense was obviously remarkable, but it all stemmed from the Celtics playing active defense. They were all flying around all night getting 14 steals and forcing 17 total turnovers. All eyes were on Colin Sexton, as he was coming off two of the best performances of his career against the Nets. But last night he came back down to earth, as he felt the wrath of Marcus Smart. Smart held him to 0 points on only one shot. Smart actually blocked that one shot and also forced two turnovers, while he only covered Sexton for 1:23. Sexton ended up with 6 turnovers in 15 minutes. After watching this game you can tell how the team's whole focus shifted to playing active defense. Kemba was all over the place with 3 deflections, Theis and Rob Will protected the paint with 5 combined blocks and even Brad was on the sideline making sure the players kept the intensity up. All the starters finished with at least a +30 plus/minus.

I can go on and on about how great everyone played last night but we have to move on to tonight’s game against the Bulls. I think tonight’s game is going to be very interesting for a few reasons. One Jayson Tatum will be back, so I’m wondering how he’s going to look both skill wise and how well he is conditioned. I also want to know how Jaylen and Tatum will blend after Jaylen has been the #1 for a few games. Next I want to see if the Celtics come in with the same intensity as they did tonight. I’m not expecting a game like yesterday, but I want them to come out with the same activity on defense. I wouldn’t be mad about a poor offensive performance as long as the team is playing good defense.

Kemba is also going to be inactive tomorrow and obviously so is Pritchard. This could be a big game for Carsen Edwards and Tremont Waters. Carsen looked fantastic against the Cavs, scoring 18 points on 7-12 shooting. He is for sure going to get his moments tomorrow, but he has to make the most of them if he wants to earn a role while FastPP is out. I’m always lowkey rooting for Carsen because he could be a difference maker for this team if he figures out how to consistently shoot well off the bench.

You know, yesterday I wrote a post about the Celtics basically pointing out all of their flaws. A lot of them are true like the bench still puts up duds and there’s still kind of a hole at the center position. But then after I write posts about them being bad, they put up a crazy performance like this one. The Celtics are just so goddamn inconsistent, man. Like against the Bulls tonight they should probably win fairly easily, but by how this season is going they could lose the game by 20 and I wouldn't even be that suprised. The Celtics confuse me but I guess it doesn’t really matter yet, it’s only the regular season. Let's just hope they get back on track tonight with Tatum back in the lineup.