The Celtics fall to 10-8 on the season with a 96-95 loss over the Los Angeles Lakers. The defending champs came into town and won a hard-fought game against their biggest rivals. This one came down to the final seconds but it was the Lakers who left the TD Garden with a win.
The Jays had another solid night combining for 58 points. Jayson Tatum had a big 4th quarter and scored 30 points to go along with 9 rebounds while Jaylen finished with 28 points. The young duo shot the ball 67% from the field but it wasn't enough against LeBron and the Lakers.
Kemba did not have the night he was hoping for. He really struggled as he finished with just 4 points and shot 1/12 from the field. Kemba had a good look in the final seconds to take the lead, but his shot along with a Daniel Theis tip didn't fall. Marcus Smart wasn't having his best shooting night as well, but he finished with 7 assists. Unfortunately, he had to exit the game due to a calf injury he suffered in the second half of this game. 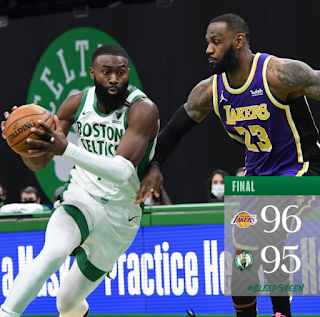 On the other side, another great duo was in action. LeBron James and Anthony Davis combined for 48 points against Boston. LeBron finished with 21-7-7 including back to back three's late in the 4th quarter that really hurt the C's. AD had a double-double in this one with 27 points and 14 rebounds. The new Lakers Montrezl Harrell had a solid outing off the bench against Boston with 16-5 to help secure the victory.
This was a tough one. Kemba really struggled which hurt us offensively but the Celtics were still able to keep this a one possession game late in the 4th. Marcus Smart will be getting an MRI tomorrow on his calf as the Celtics will be traveling to San Francisco to take on Steph Curry and the Warriors Tuesday night.
Read more from George Dimis HERE!
Follow me on Twitter: @GWDimis