A recent history of downplayed Superteams 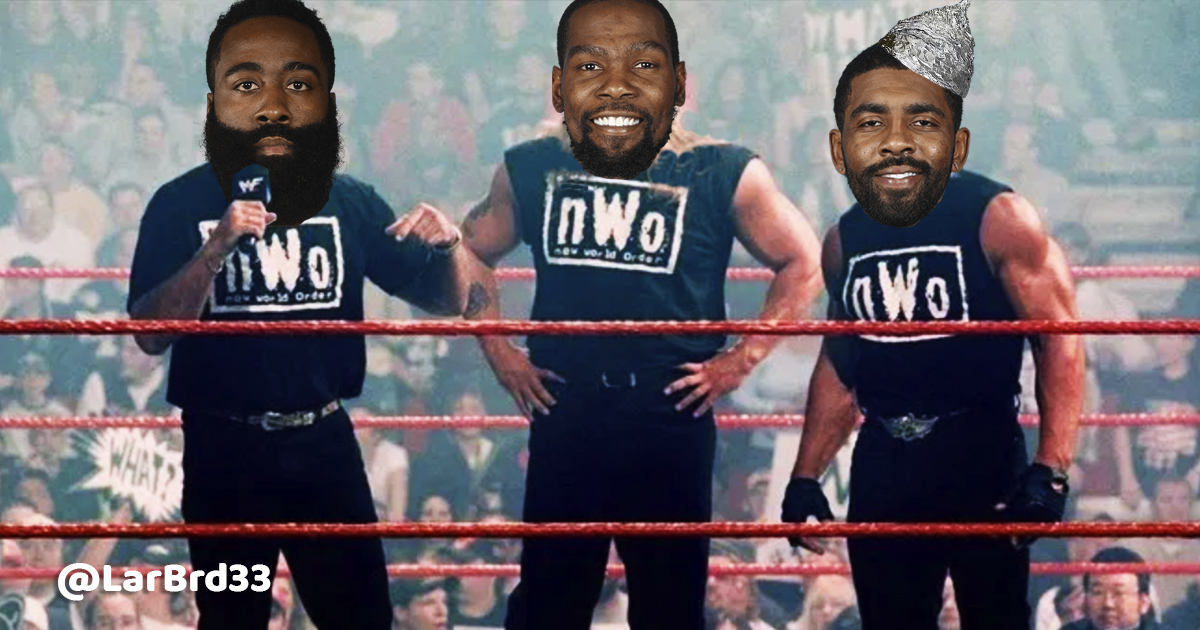 The Brooklyn Nets have formed a superteam around Kevin Durant, Kyrie Irving and James Harden.

I'm not happy about this. We just recorded a "Celtic Fan Therapy" podcast this morning to help us cope with some of the recent bummer news surrounding the team (cancelled games, Tatum with COVID, etc). That was recorded before this Harden news, though. I feel like I need another therapy session.

Maybe I'm overreacting and this isn't a big deal. I'm seeing lots of fans already sharing reasons why this might not work. Some more valid than others. One major reason, of course, is that one of their "Big 3", Kyrie Irving, is currently off the grid with rumors buzzing around him potentially heading towards early retirement (one can dream).

Assuming Kyrie eventually does return to the court, I have to admit I'm pretty worried. I think it's only natural to doubt them. Seems every time a superteam is formed, the NBA fanbase tends to react with some level of denial. Often, they point to the 2004 Lakers as an example of it going wrong. The 04 Lakers had Kobe and Shaq, added Karl Malone and Gary Payton, and still lost to the underdog Pistons.

Dig a bit deeper into that though. Kobe wasn't in peak shape, because he was dealing with a rape trial that season. Their chemistry took a hit all season with him coming and going. Malone was 40 years old and a shadow of himself having missed half the season with injury. 35 year old Gary Payton averaged 8 points in the playoffs. They still made the Finals, but ended up getting beat by a historically great defensive team built around 4 star-level players, one of which (Ben Wallace) was arguably the single most impactful player of that season due to his dominant defense.

KG/Pierce/Ray: Fans doubted this trio could co-exist. "It's three stars that all want the ball", they said. Ended up dominating the league and winning a title in year 1.

Kobe/Pau/Odom/Bynum/Artest: Fans initially downplayed the impact adding a superstar like Pau would have for the Lakers given Kobe's Lakers were barely able to finish over .500 without him. Joining those two were another all-star in Bynum and two more borderline stars in Odom/Artest. Naturally, despite the doubts, they made the Finals three years in a row and won two titles.

Wade/LeBron/Bosh: Fans doubted this trio could co-exist. How could two ball-dominant players like Wade and LeBron share the spotlight? Surely their depth would be an issue, right? Nah. Four straight Finals appearances and two titles.

LeBron/Kyrie/Love: Same deal here. Fans doubted the 19-33 win Cavs could be a serious contender simply by adding LeBron and Love. Fans doubted their depth and defense. Of course, they cooked the Eastern Conference for 4-straight seasons and won a title.

Durant + the Warriors: This is one instance where the fans correctly realized the league was screwed. They were right for the most part. Two straight titles. Derailed by injuries and Kevin Durant finally leaving after coming to the realization he sold his soul to be an anti-competitive bandwagoning bitch.

LeBron + Davis: Same ol stuff. Fans pointed out the Lakers had missed the playoffs in LeBron's first partial season. They pointed out how Davis had never even had a 50 win season. Of course, they end up coasting to a title in their first year together, because that's what happens when you pair two MVP level players.

And now, Durant/Harden/Kyrie. You'll hear the same denial about how they gutted their depth. You'll hear people say they'll suck defensively. They'll say the three of them can't co-exist. But once again, you're pairing two MVP-level players in their prime alongside another player (though an unpredictable flat-earth quack) who is an All-NBA talent with championship pedigree.

Injuries can derail them. Kyrie's quackery can set them back. Maybe they don't win every year. But going off history, this team should own the Eastern Conference for the foreseeable future. Does anyone know of any examples of teams pairing MVP level players in their prime that DIDN'T win a title together?

From a Celtic perspective, I'm particularly upset about it, because if that Nets superteam sticks around, they'll be running out of steam right as Tatum and Brown start exploring free agency.

Gotta be honest here. This could suck very much. It's also very annoying, because it's three of the most unlikable superstars in the league all getting exactly what they want. On the bright side, if the Celtics defy expectations and manage to upset this juggernaut come playoff time, it'll be all the more sweet.