Where the Celtics went wrong on Christmas 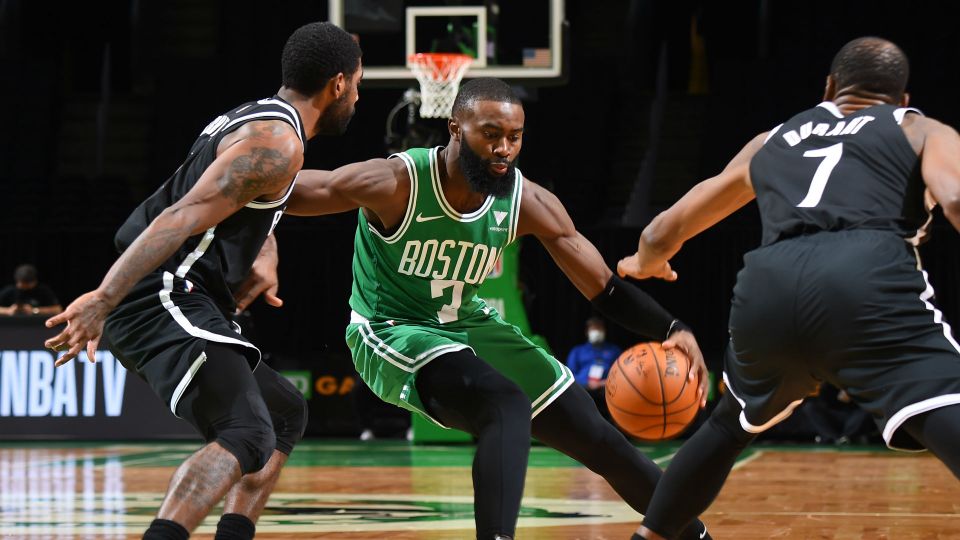 Well, I hope everyone had a very merry Christmas before Kyrie and KD came and ruined it for us Celtics fans. It was a tough one to watch, especially because this was Kyrie’s first regular season game at the TD Garden since he played for the Celtics. The Nets proved that they are a top two team with a lot of scoring power and insane depth. There were definitely plenty of reasons to be upset about yesterday’s loss, but there’s no reason for people to say “fire Brad Stevens” or “trade for Harden” or any ignorant stuff like that after the second game of the season (@ casual Celtics fans).

Mistakes were made throughout the game from the players and the coaches, but I would say we got to watch the Celtics play one good half of basketball. They held the Nets to 51 first half points, and specifically holding Durant to 9 first half points. We got some encouraging minutes from Semi Ojeleye, along with quality Pritchard minutes off the bench. The Jays started out slow offensively, but ended up with a combined 26 by half, including this crazy shot by Tatum:

After the first half, the Nets took control and it felt like it happened so fast. Durant came into the second half scoring or assisting on 14 out of their first 20 points while being primarily covered by Tristan Thompson (not an ideal matchup). Durant’s second half emergence along with Kyrie shooting 61% from the field on 21 attempts deflated the Celtics. The duo finished with a combined 66, shooting a ridiculous 10-14 from three. Look, with a KD and Kyrie led Nets team, we know that they are going to score a lot of points. The Celtics just need to not make timely mistakes and clean up all aspects of their game against them if they want to keep up.

I’m not upset at their superstar duo doing superstar things, I am upset that the Celtics got outscored 72-41 in the second half though. It was pretty close at 4:21 left on the clock in the third when the Celtics were only down 70-75. But at that point Smart and Jaylen each had four fouls so they had to be pulled from the game. Without those two in the lineup from the end of the third quarter to 9:44 left in the fourth, the Nets outscored the Celtics 20-9. This is where the game was lost.

During this time period the Celtics let the Nets go on a 7-0 run from 4:21-2:30 in the third quarter and then a 9-2 run to start the fourth quarter. After that it was too late to make a comeback against this team in these circumstances. The part that pisses me off the most is in that 9-2 run in the fourth quarter, Kyrie and KD were both out of the game, and Jayson Tatum was in the game. This exposes two things: the incredible depth that the Nets have compared to the Celtics (the Celtics aren’t at full health but still) and that Tatum should’ve taken advantage of those minutes but he didn’t. The Nets' nine points were all scored or assisted by Caris LeVert, while Tatum only took one shot attempt. To be fair Tatum didn’t have much help out there at that time, but this is the part of his game where I want him to improve. If he isn’t going to score, then I want him to make his teammates better by being more involved in the offense, drawing doubles and slides, kicking to open teammates and being more than just a scorer. If he wasn’t going to do that then he should’ve at least tried to take it to the hoop and draw some fouls, even though that hasn't been working for him considering that he's top five in drives and has attempted no free throws this year. This wasn’t Tatum’s most efficient game, scoring 20 points on 9-22 from the field.

It was very clear that we were low on guys after the lineups we had going during that 20-9 Nets run. We saw a Teague/Pritchard/Semi/Tatum/Thompson, lineup with a little bit of Javonte Green for a majority of it. Brad was also probably experimenting a little, but it’s the second game of the season and under these specific circumstances I will give him a pass on the bad lineup for now. But, it was evident that the Nets came out of the second half with way more energy than the Celtics, which is an issue. I know Brad’s not the most vocal coach out there, but he needs to find a way to get this team energized when they need it. For example, it was unacceptable that the Celtics started the fourth quarter on the wrong side of a 9-2 run after a horrible third quarter. That’s on him to give the team a spark going into the fourth. I also don’t know why he only played Grant Williams for 5:33 in the second half after making impactful plays like this one:

I love to see young players use new skills. As a rookie, Grant Williams was a pick-and-pop/spot-up guy. Now, Brad Stevens is using him in some of the old Al Horford sets. Here's two plays. First, Williams as a distributor. Tatum cuts and it's on Williams to hit the pass on-time. pic.twitter.com/zBq7NQUgHe

Also on a side note, after a very good first game, Jeff Teague had 0 points in 21 minutes against the Nets yesterday. We are only on game two and this Celtics team is already very confusing.

I’ll end this on a positive note. Two games in and Jaylen is averaging 30/6.5/3.5/1/1 to start the season so it’s time to start his All-Star campaign. He also had some encouraging words after the game so we’ll see how the Cs respond on Sunday against the Pacers.