Humoring the Harden Enthusiasts by Shipping Kemba to a 3rd Team. 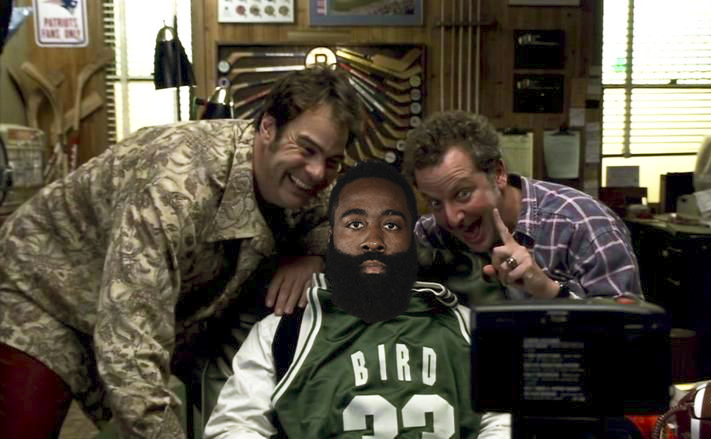 Look, I'm gonna be honest up front. I don't really want us to trade for James Harden considering the realistic cost... but ya'll are hungry for Harden content. This is pure clickbait. This will probably be the most popular word-vomit I ever write for this site.

The thing is, trading for Harden most likely means giving up Jaylen Brown. That's a non-starter for me. And not because I'm some Jaylen Brown fanboy. To the contrary, I've actually taken heat over the years and unfairly labeled a "hater" for taking a more realistic stance with him. At this point, however, he's quality fringe star with room to improve. He's a solid two-way talent who is signed for multiple years and fits really well with Jayson Tatum's window. Best-case scenario, Brown continues developing along a Jimmy Butler trajectory. Ideally, we'll have the two of those Jays here in Boston for the next 10+ years. Harden, on the flipside, is a 31 year old possibly with his best years behind him. Don't get me wrong. He's absolutely a phenomenal scoring talent. I'd go as far as to say his peak season in 2019 (36.1 points, 7.5 assists, 6.6 rebounds, 2 steals, .442/.368/.879 for a 53 win team) was objectively more impressive than Kobe's peak season in 2006 from a statistical standpoint (35.4 points, 4.5 assists, 5.3 rebounds, 1.8 steals, .450/.347/.850 for a 45 win team). However, a large part of that has to do with pace, historically high usage, how many threes Harden takes (12-13 despite shooting only 35-37%) and a number of other factors impacting the inflation of stats for guards in the modern game. I've been saying for a while that I genuinely believe if you gave Jayson Tatum 24 shots per game like Harden, he too would average 30+ with ease. Far more complicated when Tatum was sharing the court with three other high-level scorers. Then, of course, when you look at Harden's defensive ability and his style of play, it's fair to fear he's not a great fit for Brad's system which relies on a pace-and-space offense built around ball-movement and strong defense.

Above all things, though, the main reason I wouldn't trade Brown in a package for Harden is that he has the ability to opt out of his contract in two seasons. You'd basically be opening up a 2-year Tatum/Harden window that doesn't really exist right now. Both of those guys are outstanding, but are they better than LeBron/Davis? Are they better than Durant/Kyrie? Would that team even make the ECF given this supporting cast? That's a considerable risk that's not worth taking. Next season would once again be another 24/7 social media free agency circus surrounding Harden. As JR pointed out yesterday, we went through exactly that with Kyrie. Ain't No fun. No thanks. Projecting out the worst-case scenario, imagine Harden the duo failing, Harden bailing, and suddenly the buzz starts to surround Tatum's interest in sticking around.

I really do think our name is in rumors right now, because Houston is trying to pressure the Sixers to include more than just Ben Simmons in their offer. We likely aren't outbidding that and I don't believe it would make much sense for us to try.

But for what it's worth, I saw Woj was on TV the other day claiming the Rockets have had conversations with both the Nets and the Celtics and mentioned that trading with those teams would potentially require "a 3rd or 4th team" as Houston is looking for "a great young player".

Let's humor the Harden enthusiasts and unpack this a little.

If Brown was on the table, that doesn't in any way require a "3rd or 4th team". Brown is a great young player. Full stop. If his name is out there, it's basically down to our Brown package or Philly's Simmons package. I have to assume Ainge isn't willing to move Brown. For all the reasons I outlined above, I certainly wouldn't.

That means, our next logical package would have to be built around Kemba Walker and Marcus Smart. Yes, yes... I know the idea of trading Smart is upsetting. Get your rioting out now, but that's how I see it. Allegedly both were at least in discussions around the trade deadline (though it's hard to say how seriously to take those rumors). There was one report in particular that we were offering Smart straight-up to the Warriors for their #2 pick (who they used on James Wiseman, who so far looks extremely promising for Golden State):

According to Matt Moore of The Action Network, the Celtics and Warriors "held exploratory talks" regarding a trade centered around Marcus Smart going to Golden State in exchange for the No. 2 overall pick. Talks fell through, though, and Moore reports that more discussions are not expected after Boston rejected an unknown counteroffer. Moore adds that the Celtics would be targeting Memphis center James Wiseman

Worth noting... I actually went to the Warriors subreddit at the time of those rumors (right before the Klay injury) and I was mildly shocked to see many of the Golden State fans were actually pushing for their team to trade the pick for Smart. I mean, I get that we Celtic homers would die for Smart, but it was still a surprise to see that sentiment leaking outside our fandom. It's a tribute to the fact that Smart is a 1st-Team All-NBA guard with outstanding intangibles. One might even argue he's a "great young player".

Based on how those Warriors fans reacted, I think it's fair to say you can value Smart along the lines of a Top 5 draft pick.

Kemba is a bit more perplexing as an asset. He's only 30 years old. He's coming off a genuine all-star season. He's currently being load managed as a result of his knee. How does that impact his trade value? Very hard to say. That said, his knee was a problem in the playoffs and he still averaged 20 points, 5 assists and 4 rebounds. You gotta assume he is still a viable trade asset. I mean, we live in a world where Gordon Hayward just got 120 million dollars. Kemba is definitely a trade asset, right?

Question is, what team is desperate for a starting PG and would give up tangible assets that might be appealing to Houston? For a while, I had Orlando as a target. My thinking was they could use a star-level starting PG and have some prospects like Mo Bamba along with talent like Evan Fournier (who might not have a long term future there) they could possibly give up. I think Orlando's interest in Kemba might depend a little on how they see Markelle Fultz, though. They just extended him. Is he their long-term PG solution? Could Fultz play at SG next to someone like Kemba? Magic might not be an ideal destination.

How about the Knicks? Their starting PG is Elfrid Payton. Yikes. Kemba is from New York. He apparently had them as his second choice in free agency. The Knicks targeting Kemba would be in-character for them. They could put together a package of youth that might intrigue Houston. Maybe something built around Julius Randle (18 mil), players like Kevin Knox and Dennis Smith Jr, and a 1st?

Regardless of where Kemba got re-routed to, I would assume that Smart/Kemba would be just the beginning of Boston's offer. Presumably lots of future 1sts and some young guys like Langford and Time Lord would need to be included to make it worthwhile.

Would it be enough to get it done? Hard to say. However, before you snap back, "No way Houston trade trades him here without Brown in the deal", I'd counter by asking you to consider if an offer built around Smart, Kemba (re-routed to 3rd team), Langford, Time Lord and multiple 1sts is enough to outbid what Brooklyn was rumored to be offering (something built around LeVert and Dinwiddie). I think it's completely fair to say that offering a package built around an all-star PG and an All-Defense 1st team SG is a competitive package.

Note #1 - Would the Big 3 work?: A Harden, Tatum, Brown "Big 3" could potentially work. You'd run Harden at PG. Be mindful that with Hayward gone, that's freed up 13.5 shots per game. If you shipped out Kemba (15.9 shots last season) and Smart (11.4 shots last season), that's a combined 40.8 shots Boston is subtracting from last year's roster. That leaves plenty of shot opportunities for us to get Harden his 20-22 shots while also leaving plenty for Tatum (18.6 last season) and Brown (15.6 last season) to get a healthy boost in attempts. It's far easier to balance a 3-star offense (Harden, Tatum, Brown) than a 4-star offense (Tatum, Hayward, Brown, Kemba).

Note #2: Addressing needs via TPE: Hypothetically shipping out Kemba, Smart, Langford and Time Lord = 53.3 mil in outgoing salary. Harden himself only makes 41.2 mil. So even if Houston also sent back 35 year old PJ Tucker (7.9), a vet that could actually help us, we're still only taking back 49.2 mil in salary. Which, if you've been following along with the TPE deep-dives, would actually increase our current "hard" cap from 22 mil (23.5 if you waive Javonte) to 26 mil (28.5 mil if you waive Javonte). That means, if Boston had anything left to trade, they could try landing another piece utilizing the TPE. Buddy Hield, for instance (24.7 mil) if we need a nasty shooter spreading the floor? How about LaMarcus Aldridge (24 mil in final year)? A line-up of Harden, Brown, Tatum, Aldridge, Thompson? We'd have options.

Note #3: Big-picture long-term view: One thing I'll point out about this from Boston's perspective. If they were able to land Harden without giving up Brown, it leaves them in a fairly interesting position heading forward. Tatum and Brown remain under contract for the next 4-5 seasons. As-is, Boston is going to need to pay Marcus Smart in 2 seasons which would cut into their ability to have relevant cap space once Kemba falls off the books. However, with both Kemba and Smart hypothetically traded away, it would mean that even if Harden bailed in two seasons, Boston would have no real major financial commitments beyond Tatum and Brown. Meaning, even if our "Big 3" of Harden, Tatum and Brown failed, and even if Harden pulled a Kyrie and bailed at the end of the 2022 season, Boston would really only have Tatum and Brown eating up major cap and the ability to target another max-contract star that better aligns with their ages. Like, for instance, Tatum's close friend Bradley Beal, who has the potential to hit free agency that same offseason.

Bottom Line: I think we have the ability to make a competitive Harden offer even without including Brown. It would require shipping out Smart and Kemba, with Kemba likely being re-routed to a team willing to give up value for him

Edit (12-27-20): We discussed some of these topics in the latest episode of the Celtics Reddit Podcast: http://www.celticslife.com/2020/12/what-are-biggest-takeaways-from-first.html