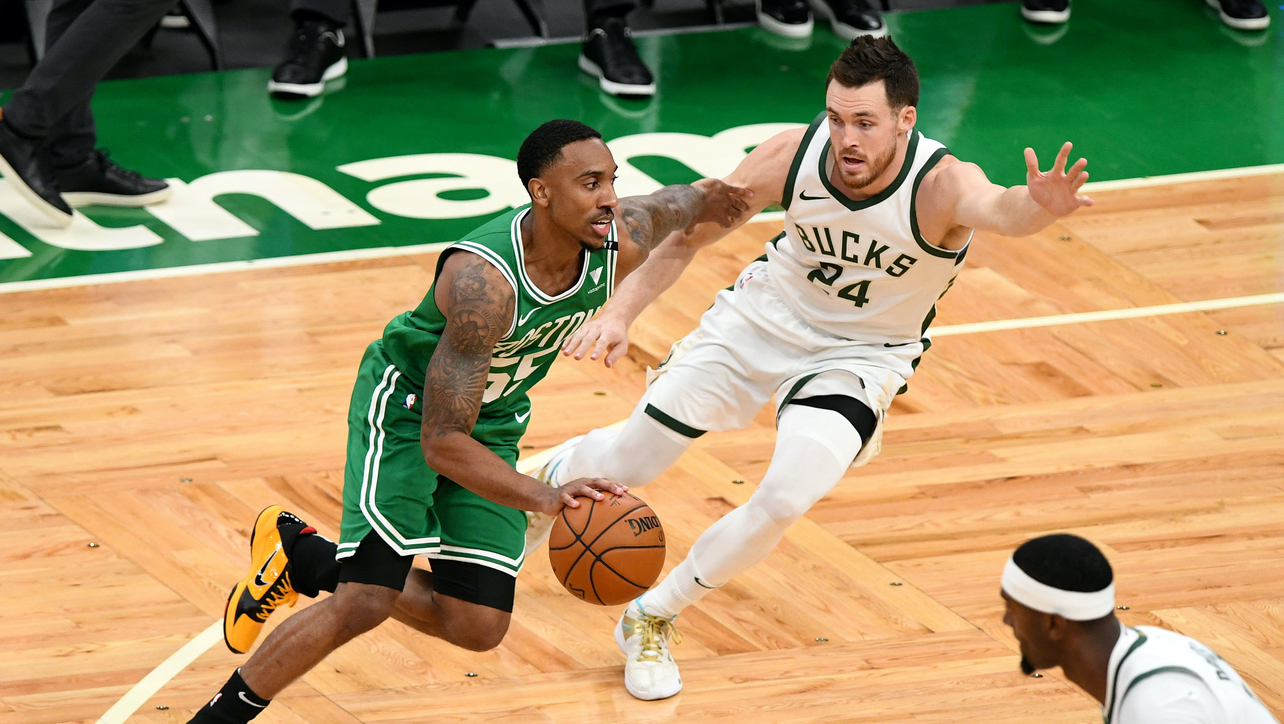 We found out quick in last nights 122-121 win over Milwaukee, just how good of a pick-up Jeff Teague was for the second unit, this offseason. Tristan Thompson, our only other free agent signing, also showed up, despite being on a minutes restriction.
When news of Kemba Walker missing time was first reported, it was highly assumed that Teague would slide into his place as the teams starting point guard. In preseason, Brad surprised us with Javonte Green in the starting five instead, and then in game one we got another surprise with Thompson in the lineup alongside Theis instead of Teague again. Stevens likes having the savvy veteran leading his second unit and it paid off big time last night. After going 5/5 from three though the preseason, he quickly came up with a triple after entering the game against Milwaukee. Teague is quick, shifty and could get to his spot basically at will last night and with great vision was making right play after right play. On the defensive side of the ball, some were skeptical as he is another small point guard which really hurt us in last season's playoffs, be he showed good hands and the ability to stay in front of his man in game one. Jeff came away with steal off an outlet pass in transition and had a key block on a breakaway layup attempt in the final minutes of the fourth to give the ball back to the Celtics. He also stripped Giannis on a layup in the second quarter. While he may be small and could get taken advantage of by some bigger guards and on switches, he is a savvy veteran who knows how to use his hands to not foul and can come up with big takeaways for his team. Teague continued his streak of not missing from deep and finished the game 4/4 on threes. He finished the game as the teams third best scorer and with a line of 19pts, 4ast, 3reb, 2stl, and 1blk as he shot 7/15 from the floor. Here are Jeff Teague's full game highlights;
Now onto Thompson. We only found out the day before game one that he would be available to play and then a few hours before tip-off, Steven's had him penciled in to start alongside fellow big man Daniel Theis. This used to be a traditional lineup but nowadays it is against the norm to have two post playing big men in your lineup. We did see Theis take six threes and convert on two so maybe he can be more of a stretch four this year than in the past. Thompson had the tall task of covering Giannis for most of the time he was out there similarly to how Brad used Al Horford while he was in Boston. Giannis had his way down the stretch of the fourth quarter as he flashed his new three point shooting ability (and apparently a step back?), but Thompson played pretty good defense on him up to that point. It was apparent early that Tristan is a different kind of big and in the more traditional sense than Theis, as he was bodying up anybody backing into the paint and was very effective down low on the defensive side. Statistically, he came exactly as advertised, though some had doubts about his rebounds holding in Boston. On just 22 minutes of game action, Thompson posted a 12pts, 8reb on 6/10 shooting. Offensively he looked good with primarily put backs which we have struggle with in the past, and he had a nice left handed jump hook in heavy traffic as well. In terms of his minutes restriction, he played 22 minutes and didn't look to have any problems or show any signs of injury all night. Hopefully, the restriction will be dropped and we can get a full game of Tristan in the near future. Boston plays KD and old friend Kyrie on Friday night, here are Thompson's game one highlights;
Jeff Teague photo credit via Brian Fluharty - USA TODAY sports