The benefits of having a tough schedule early 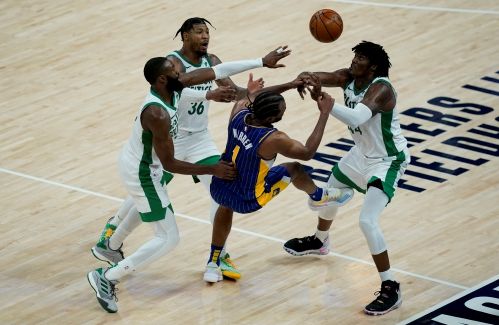 Alright the Celtics aren't off to a great start. Some may even say it's a bad start. You know, at times during this Pacers-Celtics game I looked at the Celtics and was like "wow this team sucks", then the game ended and I was like "wow this team sucks, but they seemed like they really gave it their all in the end and that gives me hope". Just like that, they reeled me in.

The Celtics fell to the Pacers 108-107 in a sloppy yet gritty game. It didn't look like they were all on the same page offensivley and they struggled badly at times defensively. But they made a comeback in the fourth and showed that they played with heart by making defensive stands down the stretch (the Pacers last possession). You can look at the results of these first three games in two ways: the Celtics need to fire Brad Stevens and make roster chages or they are screwed this season (AKA a doomer) OR you look at these first few Celtics games against great opponents and realize that these are opportunities for the team to learn about themselves more.

When playing better teams, we get a better look at how the coaching staff tries to establish a role to each player. So far without Kemba Walker, it is very clear that the Jays are the primary shot takers and Smart is the primary playmaker averaging 6.3 assists over the first three games. Some other established roles is that Tristan Thompson is our best rebounding big man doing the dirty work inside and Teague is going to be our primary bench scorer for the time being. I know Teague hasn't made an actual shot in the last two games but against the Pacers he was able to get to the line 5 times, making 9 out of 10 of his free throws. I think Teague will end up being the missing piece that we really needed.

That's only five guys (excluding Kemba) with definitive roles on the team, everyone else is a question mark. Pritchard has looked very mature for a rookie so far, but will he be playing well enough to sustain a role when Kemba gets back? Theis has the versatility to play the four and five on this team, but which position does he benefit more at? Grant Williams is capable of bringing a lot to the table, but what is his actual best skill that can be exploited in the lineup? Semi has been getting a lot of minutes early on, but can those minutes be more benefical if given to someone else? Rob Williams has clearly been working his ass off on and off the court, assuming he stays healthy will he be able to hang with good centers across the league and earn late minutes like he did against the Pacers? I mean it's only game three but it's worth thinking about how these players will fit into the rotation.

Rob Williams is really taking this one personally. He owned his mistake on the final Indiana possession that led to Sabonis' game-winner.

"I feel like I'm definitely coming along, making the progress, but I'm not coming along fast enough," he said.

When there is this much uncertainty on a team, it's hard to play team offense, at least that's the excuse I'm going to use for now. So far against these other playoff-level teams, the Celtics offense has looked stagnent and the offensive strategy looked weak. The reason why the Celtics were able to hang with the Pacers the whole game is because of indivdual skill. We got bailed out by Jayson Tatum fadeaway twos and Jaylen Brown contested layups. Now if this was against a team like the Pistons or something, individual skill probably would've been enough to win the game. Against teams like the Nets or Pacers, there needs to be actual team offense with more ball movement and every player needs to have an idea of how what they are doing on the floor.

These first three teams have also exposed the Celtics horrible transition defense, but that is something that I think will change soon. When the Celtics slump on offense like they did in the beginning of the third quarter, it is evident in their defense. Bad offense leads to lazy defense with this team. I'm not as worried about the Celtics defense though because it's a matter of whether they feel like trying or not and when they play at the level they are capable of, they get gritty. Like we saw at the end of the Pacers and Bucks games, players were diving on the ball, playing physical and it looked like they were locked in defensivley. We need that kind of effort for a full four quarters.

Speaking of the end of games, lets talk about Tatum's shot. Did I want the ball in Tatum's hands at the end of the game? Of course. Did I want Tatum to wait out the whole clock without moving the ball and eventually taking a deep step-back three? Hell no. Is this a great learning experience? Absolutley. That miss was a blessing in disguise. The Celtics are lucky to be in this type of situation twice in the first three games because we got two looks at a very similar play. The first one Tatum obviously socres on an isolation side-step three against the Bucks and it was awesome. The second time around, Tatum tried a similar shot and it didn;t look pretty. The Now that we saw that shot miss the Celtics will hopefully try a different strategy next time like perhaps driving to the rim and drawing a foul. Or giving the ball to Jaylen Brown who is very capable of hitting a shot like that. It is also great because Tatum needed to see that shot miss. He came back down to Earth and hopefully realized that those shots aren't always the move. His end of the game isolations haven't been that successful, but I have faith that he will find a way to get more high percentage shots.

Here are Tatum’s last six field goal attempts with 0:10 remaining and either a) the game tied or b) the Celtics trailing by 1.

I count six stepbacks, five threes, one make, and a whole lot of isolation... when all you need is 2.pic.twitter.com/j24YOu5qS8

I'm being pretty negative in this post, but I don't think the Celtics actually suck. Lets be optimistic here! It's only game three, so the team has plenty of time fix their mistakes. It's early and the Celtics are clearly still working out the kinks. If I was really worried I'd be freaking out a lot more. So when I start freaking out in a blog post, then you guys should be worried.

Indiana edged past us for a one-point win following our late-game comeback Sunday night. pic.twitter.com/pjfea0hLVk