Plenty of Reasons For Optimism 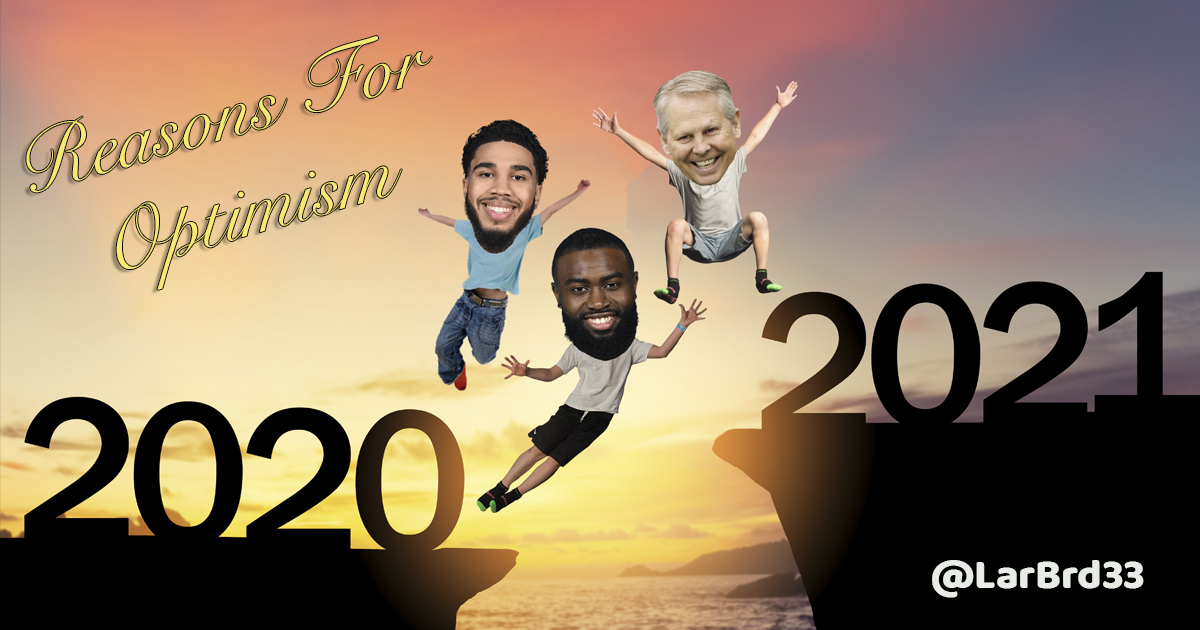 It's way too early in the season to get too high or low about anything happening, but as I said in this morning's Celtic Reddit Podcast there's plenty I'm optimistic about.

Kemba Ain't Retired: Let's certainly not forget Kemba isn't playing and the team is adapting to his temporary absence. Despite the knee soreness he averaged 19.6 points, 5.1 assists, 4.1 rebounds with 44% shooing in the playoffs. Somehow fans went from underselling his knee issue to borderline overreacting to it. He'll be back. Hopefully his stem cell treatment and strength program alleviates that lingering soreness he played through. Even if the issue continues, we saw in the playoffs he can still be a huge help.

Same ECF Team: Nobody banged the "Healthy Hayward is our 2nd best player behind Tatum" drum louder than me, but it can't be overstated how little he contributed to our playoff runs. Literally healthy for 1 playoff game. This is basically the same exact team that made the ECF last season with some key additions (see next point).

Newcomers are an Upgrade: Already seeing very positive signs from Thompson and Pritchard. These two will make an impact this year in their roles. Teague for Wanamaker might be a wash, but the additions of Pritchard and Thompson should legitmately help once Kemba is playing and our lineup balances out.

Experimental Rotations: We knew going into this we'd see some experimenting. Nobody expected a Theis and Thompson starting line-up. Interesting. It means shifting Tatum over to SF. Pretty new for everyone. You should expect more experimentation as the early season progresses. I'd like to see more shooting in the starting line-up.

Brown and Tatum Adjusting: As mentioned above, Kemba is out. Hayward isn't there either, obviously. We're seeing some quirky line-ups. The Jays are on their own and adapting to their new responsibilities. They've been our primary ball handlers and so far I like what I see as they've both taken turns driving to the basket and kicking out to open shooters.

Tatum Starts Slow: Fair to point out that Tatum had a slow start in the past two seasons. 2019, his first 7 games he averaged 16 points on 40%/28% shooting and then improved dramatically. Likewise, last season he came out of the gate really struggling with his shot until suddenly he got in a superstar groove after the New Year. All things considered, coming out of the gate averaging 25 points, 8.7 rebounds, 3 assists, 1 block, 1 steal with 42%/39% shooting is encouraging.

Brown looks amazing: He's just continuing to get better and better. Getting to the basket at will and finishing with contact. He looks poised to take on an even larger role and should be an all-star candidate.

Time Lord Improving: Encouraging signs from this dude as he continues to make strides. Our 3-center rotation of Theis, Thompson and Time Lord is solid. If all three are playing at a high level, it's going to be interesting to see if we move one of them for help at a position of need.

Tough Schedule: The Bucks were the best team in the NBA last season, but we beat them. The Pacers are basically the same team that made the playoffs last year. No shame in dropping a close one to them as we figure our stuff out. Nets are going to be a monster, but we knew that going into the season. Read more about this in Seth McCullough's recent article: "The Benefits of having a tough schedule early"

Mystery Depth Chart Future: Starting the season with rookie Payton Pritchard averaging 20mpg is a bit of a surprise. Our depth chart might look entirely different a few months from now. Young guys like Nesmith and Langford might vault into key roles. We might end up pulling the trigger on a major TPE acquisition. We might make a trade for some vet help. A lot can happen in the next few months. Consider Miami last year. By the playoffs they had two rookies (Nunn and Herro) making huge contributions alongside two players (Iguodala and Crowder) who didn’t start the year with them.

The key thing is that we went into this season knowing we'd need to feel out the team, see who was able to step into greater roles, play around with different line-up configurations, and re-evaluate our options closer to the trade deadline.

Bottom Line: So far, I have no real complaints despite starting the season 1-2. I like a lot of what I'm seeing.