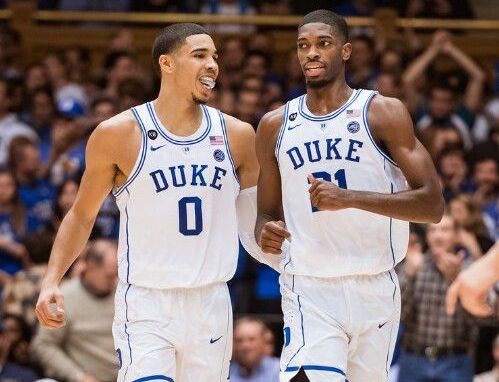 Could Amile Jefferson be this year's Javonte Green? Well he won't have summer league or many preseason games to show his stuff, but the 27 year old big man does have a solid reference in teammate Jayson Tatum. Jefferson was a 5th year Senior for Duke during Tatum's one-and-done year in Durham, NC. And Tatum was pushing for some team to sign Amile just five days ago.

Turns out that team is Tatum's Boston Celtics.

The Celtics have signed former Duke big man Amile Jefferson to an exhibit 10 deal, per source. He played 18 games for the Magic last season.

With this Exhibit 10 contract Jefferson can either make the team or if he's waived the Celtics can retain his rights on the Red Claws. Jefferson would need to agree to the latter scenario. Teams typically bring more than just their 15 man rosters to training camps, so don't be surprised to hear about another signing today.
Amile has played in 30 games for the Orlando Magic the past two seasons. He has spent more time in the G-League (See some highlights below). For Jefferson to make the team, the Celtics would need to either waive another player or trade one. Players like Carsen Edwards, Tremont Waters, Javonte Green, Semi Ojeleye, and Tacko Fall could be on that list. Jefferson will have a lot of work cut out for him.
Too bad the Celtics didn't make this signing a couple weeks ago. Might have convinced Tatum not to make that 5th year on his contract extension the dreaded "player option." (Kidding on that. Don't need someone to somehow misconstrue that as Danny bashing).
In a related note I have no idea what the NBA's plan is for the G-League this season. Not even sure if the league does at this juncture.


Celtics release schedule for the first half of the season https://t.co/cDUSwHJNqN pic.twitter.com/JabA3IaMdN