Top 5 best Fanbases in the history of NBA

Every NBA franchise has their loudest legions of fans, some larger than others. With the popularity of online communities, forums and fanbases, to be a fan and praise your favorite team is easier than ever before. Fans bet, analyze, discuss and compare the brightest and challenging times of their teams. The pop culture used the power of the fandom by making the NBA franchise even more layered, offering different levels of entertainment when there are no active plays. For example, here we have many fantasy, video and bingo games that captured the excitement and experience of the land-based sports competitions. Make sure to check out Bingo Scanner for the best new bingo sites, and different bingo themed games. Now, let’s see which team can proudly say that has the best and most devoted home crowd?

Here, we answer that question by praising our top best fanbases in the NBA. There are several critical factors in establishing yourself among the NBA's elite home-court advantages. We went through attendance numbers the past few years to see the fans who are there through thick and thin, and which ones fade when times get rough.  With no particular order, here are our top choices:

Much like the team they support, Spurs fans fly under the radar when it comes to recognition among top NBA fanbases, but are every bit as strong as the team they represent. They are also very considerate, too.

Unlike their neighbors in Dallas and Houston, who have the Cowboys and Astros respectively to take away attention from its basketball franchise, the Spurs are the only game in town in San Antonio.

The Spurs' attendance numbers aren't as great as they were a few years ago when the team finished in the Top 10 in 2008 and 2009, but the Spurs still managed to draw a crowd.

For now, Spurs fans are the manifestation of their favorite franchise. They are underrated, unassuming and under-appreciated. The combination of few great superstars like Shamanic And Walker will continue to give fans reasons to cheer and make signs based off of unintentional catchphrases in the future.

The Utah Jazz summarizes a team fighting an uphill battle in a small market. They happened to have an excellent run of success in the ’90s. Since Karl Malone and John Stockton left in 2003, Utah has had up-and-down levels of play. But the fans still love their Jazz. Even in 2013–14, when the team won their fewest games since 1979–80, Jazz fans still funnelled into the arena at an average of over 90%. That’s real dedication among a fanbase.

Unlike in Miami, fans of the Orlando Magic endure a history of pain and continue to support their team through thick and thin. The Magic have had two great stretches in their history, making back-to-back Eastern Conference Finals appearances and one trip to the NBA finals each time. Yet, both times, they saw their team get torn apart shortly afterwards.

Magic fans are in the middle of the pack in showing up to the stadium for a losing team. They are near the top in attendance when the team on the floor is worth watching.

Knowing that Knicks fans are so passionate, they’ll probably be agitated that Celtics fans rank one spot higher than them. The Celtics have had a nice run in the last years, opening the door for fans to show up in droves and embrace their favorite basketball team. But it’s easy to forget that, between Larry Bird and Kevin Garnett, there were 11 seasons in a 14-year stretch where Boston was under 500. However, even in the worst years, Celtics fans didn’t let their team fall below 90% capacity for attendance.

Everyone remembers the days of Michael Jordan and the unbeatable Bulls back in the ’90s. However, ever since Jordan walked away in 1998, the franchise performs anywhere from average to downright poor. They’ve won five playoff series in 17 years, making just one trip to the Eastern Conference Finals, and they’re currently nowhere near their brightest days. Including 2016–17 to date, the Bulls have finished No. 1 or 2 in-home attendance percentage every year since 2010. They even filled the United Center in Chicago in the lean, post-Jordan days. That’s what we call dedication among fans, even if the team is no longer the definition of power and superiority. 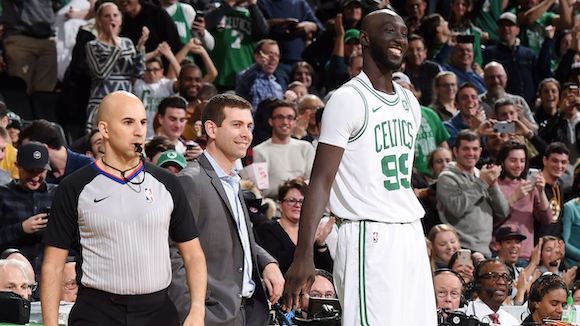