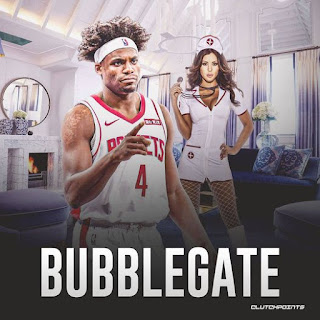 Not that Danuel House is an amazing basketball player, but if the Rockets had any chance of coming back from their 2-1 deficit to the Lakers they needed the key rotation player. They struggled mightily in his absence in Game 4 and now face the tall task of having to win three straight. Danuel House will not be part of that quest as he's been jettisoned from the NBA bubble.

The punishment fits the "Bubble Law," but is also interesting. If the Rockets lose Game 5 and get eliminated well you can say that the loss of House for those two games played a big part. But of Houston somehow came back to beat the Lakers and then made it all the way to the NBA Finals, then that would be a ton of games that House and the Rockets were punished for. The assumption by the NBA is likely that the Rockets are dead men walking right now, so the latter situation doesn't really cross their mind.

One could also ask whether the punishment would be the same if it was a marquee name like LeBron James or Kawhi Leonard? Personally I like that they have the strict rule. The only way the bubble was going to work was to be strict. Just hope there aren't any favorites being played here.

The league says "House had a guest in his hotel room over multiple hours on Sept. 8 who was not authorized to be on campus"

The strict letter of Bubble law, remember, says no one on the NBA's Disney campus is supposed to let anyone in their room -- not teammates, coaches, etc.
— Marc Stein (@TheSteinLine) September 11, 2020

James Harden: Can't believe Danuel House got kicked out the bubble for inviting a COVID tester to his room.