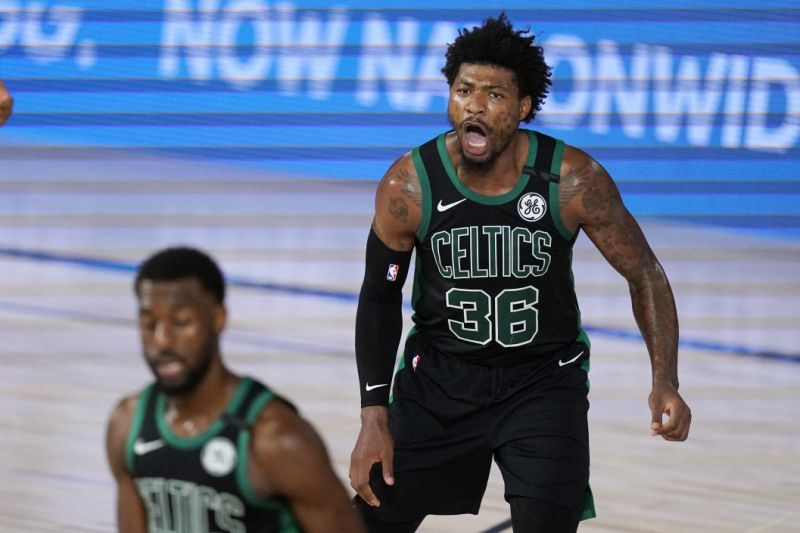 After back-to-back disappointing losses the Celtics were able to stop the skid and take back control of the series with an end-to-end victory in game 5 with a final score of 111-89. The team had great energy tonight, playing with a much better pace than Toronto. They worked hard on almost every possession and played hungry. 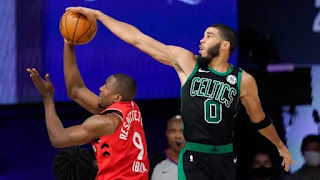 Jayson had a pretty good game overall, but his offense was pretty inefficient. He put up 18 points on 5-15 (33.3%) field goal shooting, 1-5 (20%) from three-point range. To go along with his 18 points he had 10 rebounds, 4 assists, 1 steal, and 1 block. He was all over the court on both ends, and he hit a few tough shots in the early minutes to help the Celtics grow their lead.

Again, Tatum was solid today, but he can definitely play better going forward. He needs to pick up his shooting percentage, eliminate his two turnovers, and try to avoid fouls a little better. His +/- was the lowest of those who got significant minutes, sitting at a 12. Still, there’s not too much to complain about given the outcome, getting him a B+. 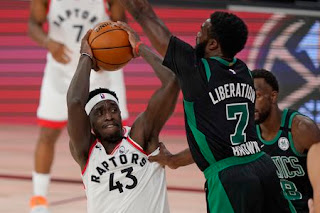 Jaylen bounced back in the best way possible, leading the team with 27 points and tacking on 6 rebounds and 3 steals. He was rolling throughout the game, shooting a great 10-18 (55.6%) from the field and 3-7 (42.9%) from three, much better than his previous game. He pushed the pace throughout, and made the hustle plays whenever possible. He also played a team high 37 minutes, showing that Brad kept his faith in him and for good reason.

He was back on Siakam and OG on defense and definitely brought up the physicality and energy again. He held his ground and prevented the basket on more than a few possessions. Overall, Brown had a great game for himself and for the team, and he looks incredibly confident and incredibly dangerous right now. He earned himself an A+ tonight. 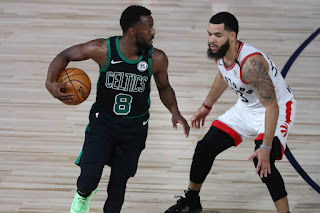 Kemba had a solid game, putting up 21 points, 4 rebounds, and 7 assists. He did so on 8-15 (53.3%) shooting from the field, but sadly the second consecutive 1-6 (16.7%) shooting night from three-point land. He followed up on his word and was more aggressive tonight, although he continued to share the sugar passing the ball around. He honestly had a pretty solid game, but like Tatum he needs to pick up his 3-point percentage and limit his turnovers better, being that he gave the ball away 2 times tonight. He earned himself a solid A- tonight. 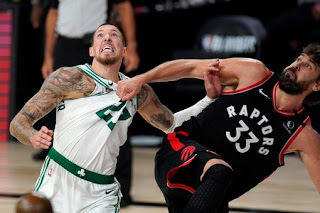 Theis played like the best player on the court for a lot of his 30 minutes. His defense tonight was the best I’ve seen from him, from locking up Lowry on the perimeter to swatting away 2 (and a half if you include his block on a shot that Kemba already blocked) shots. He seemed like he was living under the boards, at least getting a hand on what felt like every missed shot. He finished the game with 8 rebounds to go along with his 15 points on 5-5 (100%) shooting. He played above his role and was a key piece in this win. He earned himself an A+ despite his one lazy pass that led to a turnover.

Marcus Smart has been synonymous with hustle and grit his entire career and tonight was no different. Although the box score won’t show it (although when does it ever for Smart?), he played great defense all night, forcing tough shot after tough shot.

One of the below-the-radar keys for the #Celtics strong showing was having Marcus Smart spend more time defending Kyle Lowry from the outset. Lowry was 0-for-3 in the first quarter and has 7 points on 2-for-7 shooting in the first half.
— A. Sherrod Blakely (@ASherrodblakely) September 7, 2020

He had a pretty decent game offensively too, generating 12 points on 4-8 (50%) shooting, 2-5 (40%) from 3. He also tallied 7 rebounds and 6 assists to go along with his scoring. His main downside tonight was his turnovers. He gave the ball away three times tonight, almost a third of the teams 11 total turnovers. Smart gets an A- for tonight (I know I’ve been generous elsewhere so sadly I have to try to pull back a little on this one).

Brad played his role perfectly tonight, adding great value both when playing alongside Kemba and when Kemba was on the bench. He shot an efficient 5-9 (55.6%) field goal percentage and was 3-5 (60%) from three. He put up 15 points off the bench to go along with his 3 rebounds, 2 assists, and 1 steal. He helped to keep the team under control while still continuing to push the pace. He gave Brad Stevens exactly what he was asking for in terms of bench production, getting him an A+ for tonight.

“It was hard to take him out,” Brad Stevens says of Brad Wanamaker. “He was playing great.”
— Boston Celtics (@celtics) September 8, 2020

Rob sadly earned himself a below average grade for the night, the only one on the team, and the least of my generosity. His minutes were limited at 9, although they were still the second highest of any bench player. He managed 4 rebounds and 1 block, which isn’t bad, but his defense left much to be desired. If I’ve said it once I’ve said it a million times (although I think I said it a million times anyways); he needs to learn some self-control.

It looks like every time he plays defense, he gives about 5-10 feet of space, hoping to be able to close it out with his athleticism. This leaves him little time to make good judgement whether to jump and try to block or not. On top of this he closes out very late on the perimeter, and it often seems like he’s jumping just to jump, not to affect the shot. Having faith in his athleticism is not a bad thing, but he needs to be smarter about when to use it. I’d rather him stay down and try to get up quick when the shot is actually in the air than see him fall for every pump fake. Rob gets a very light C- for tonight.

Brad had a bit of a bounce back game himself. Looking at him on the sidelines you could tell that he really wanted this win. He set the tone by being incredibly vocal and showing a lot of emotion. At one point in the 2nd quarter Theis had a lazy pass that resulted in a turnover, and Brad made sure that Theis knew he messed up even though they were still up by 21. 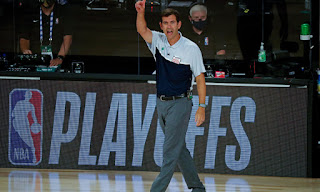 He switched up the defense a bit, switching Smart between Lowry and Siakam. He knew the matchups he wanted and did a good job of stifling Toronto’s offense. He also got the team some great open looks on offense, which definitely made it easier to jump out to the early lead. Even in the final minutes Brad kept his foot on the pedal, keeping the starting core in to finish out the game until it was really set in stone.

My only complaint is that it seemed like Toronto was able to get favorable mismatches a little too often. Most of their offense in the post seemed like it came off a mismatch, which is hard to control, but maybe we can look to see some different matchups in anticipation of switches. Brad gets an A+ for tonight.

Whoever made the jersey selection for tonight gets an A++. The Celtics are now 4-0 when wearing their black “Statement” jerseys after tonight’s win.

Celtics back in black jerseys. They won the first two games of this series in them and are 3-0 for the postseason.
— Chris Forsberg (@ChrisForsberg_) September 7, 2020

As you can probably tell, the Celtics have me in a great mood tonight. They played with great energy, pace, and cohesion. I know most Celtics fans want to forget last year’s team, but this was a game that was nowhere to be found against the Bucks last year. The Celtics have come a long way from then, and they need to continue to grow like this as they’re just 9 wins away from being champions. The next game against Toronto is Wednesday at 6:30 PM where they look to close out the series and advance to the Conference Finals. Here's my favorite highlight of the night to hold you over until then: