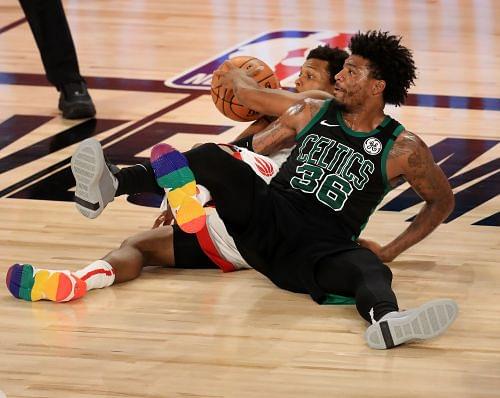 Tuesday’s Game Two between the Celts and Raptors will ever be remembered for Marcus Smart’s unconscious flurry of Q4 three-point shooting that put Boston in the “driver’s seat” for good.

But what will stick out in my mind as much (if not more) is the play for which Brad Stevens’s Swiss Army Knife was subsequently assessed a $5,000 “flopping” fine.

Marcus was in hot pursuit of a Fred Van Vleet break-out following one of Boston’s 17 turnovers with a little less than three minutes left in Q3. Smart had no real chance to catch up with the ball, but he did draw even with Pascal Siakim in the paint, even got his right leg in front of Pascal’s left.

While the official’s call was overturned after video review – giving Toronto an unusual three-point play – this little scenario is indicative of how Marcus Smart competes on the basketball floor. It’s a physical and intellectual “tug-o-war” for every square inch of the 94’ x 50’. 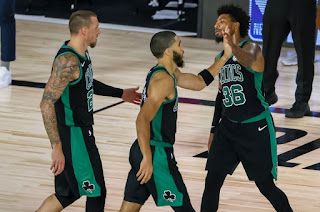 Take a look at Marcus the next time he is discussing/protesting a call that’s gone against him. He’s not “venting” but rather trying to get a better understanding – perhaps give one to the ref. These exchanges frequently involve demonstration and often end with nods rather than scowls.

In Game One’s easy win, the teams were dead even in “stops” – each side had 59 “Empty Possessions.”

In Game Two’s nail-biter, the teams were dead even in Conversions – each side had 43 successful offensive possessions.

As long as Toronto keeps missing three out of four treys while taking 46 percent of their shots from behind the arc, we’ll be fine, right?

During the regular season, the average NBA team secured 10.1 Offensive Rebounds per game and posted an OR% of .225.

Through two games, the C’s and Raps collectively grab just under six apiece, an OR% of .131.