It's definitley a bold move by the Nets and I'm pretty sure they first made sure their sensitive stars Kevin Durant and Kyrie Irving gave their blessings. And its being speculated that Durant hand picked Nash who worked for the Warriors while the star forward played there. From how he saw the floor and led those Suns teams, it's not hard to see that Nash could be a solid head coach. Having no experience at all and having to deal with the Nets roster, lofty expectations, and the New York City marketplace will be a tall task.

Hall of Fame guard Steve Nash has signed a four-year contract to become the next coach of the Brooklyn Nets, sources tell ESPN.

So Kevin Durant hand-picked Steve Nash, who worked behind the scenes at Golden State, to run the Nets even though he has zero coaching experience. There’s pressure to win immediately & KD/Kyrie are two of the most high-maintenance players in the NBA.

What could go wrong? 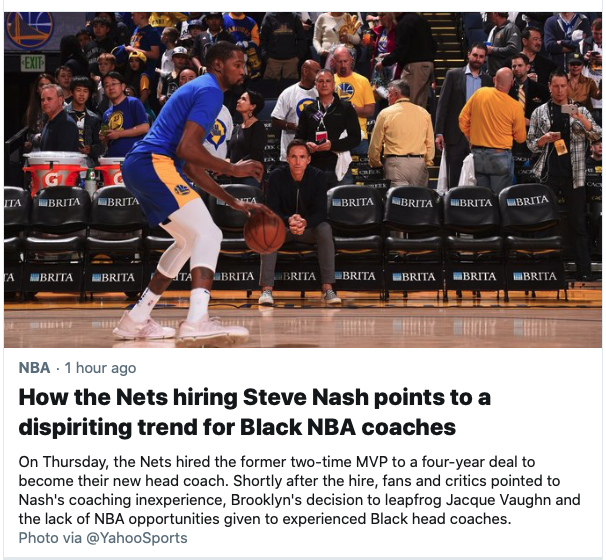 The Nets are also getting some blowback for the hiring, due to them passing on interim coach Jacque Vaughn who is Black. You will lkiley hear mnore on this the rest of the week. Not really fair to Nash, since his basketball resume speaks for itsef and many other players, especially former stars, have gone straiht to the head spot on the bench. Also it was a powerful Black man in Kevin Durant who used in power to make the hire, so it's not like it's a "good ole boys" situation. Would say I'm rooting for the Nash to succeed, but can't stand their stars, so sorry Steve. If it was the overachievers from two seasons ago it owuld be a different story. In other coaching news, lookimg like Tyronn Lue is emerging as the favorite for the 76ers job.