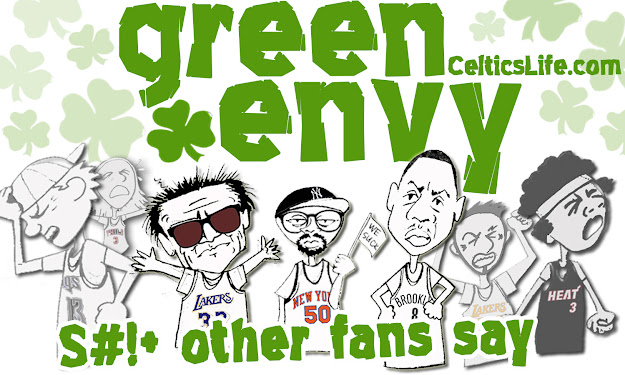 Sorry we're late today but how in the hell could I have done this article when last night all I wanted to do was run in the street screaming Let's F**KING GOOOOOOOO!
Primal KG scream aside, The Celtics advanced to the ECF off a hard fought game 7 victory against the Toronto Raptors where they'll face Jimmy Butler and the Miami Heat. Now that the Raptors' season is over the salt is particularly potent from their fans and BOY do they hate Pascal Siakam right now. Let's take a listen in on what some of them have to say.
Top Comments
“Easily winnable but we didn’t execute” should be the motto of that whole series for the raptors tbh
excuse me while I go cry in the corner.
Not even a fair series when you have a double agent playing on your team
You know, on second thought, maybe the NBA should cancel this season and start fresh next season. No need to put the health of these young men in jeopardy.
Toronto and losing to Boston in game 7 name a better duo
The Best of the Rest
I'm mostly sad because it's the last time we will see this lineup play together, love this team
It’s not the losing that hurts, its the losing to Boston
PAIN. SO MUCH PAIN
Welcome to the club!
-Bucks fan
well at least fred will be cheaper now if we decide to re-sign him
Remember when everyone though Nurse was saving his bag of tricks for the playoffs?
Turns out the secret play is simply play the starters till they drop dead
Fred just airballed his max contract extension. Great effort Raptors - get it done next year!
I’m fucked. I talked way too much shit to my cousins in Boston.
Just pain. Nothing else. Congrats to Boston.
WTF WAS THIS TOMFOOLERY
That nonna lied to our faces. No curse was removed
This was such a fun team to watch. Damn :(
Oooof- there were more turnovers in that game than there are in a Danish pastry shop.
I genuinely believe there was an plan to throw this series and go home
I only watch basketball when the raptors are in the playoffs! Hope y’all are back next year (See you next year!)
Thank god we can go back to ignoring the crybaby celtics fans accusing every player of flopping. (Rich coming from Kyle Lowry's & Nick Nurse's fans)
I'm glad the bandwagon is going to empty
All I’m a say, is that fuck Boston, their fans are literally the fucking worst. Salty about everything. (Oh? Tell me more about salt)
Ibaka 20 minutes like we don't need any scoring.
Just let the void take me, it'd be better
I honestly don't feel bad for anyone besides Lowry, OG, Ibaka and Matt Thomas. Everyone else was terrible tonight.
Obviously we needed Linsanity this year.
So that's how it feels to not have Kawhi.
I remember the years where Andrea Bargniani was our best player and we never made the playoffs, and now everyone is upset we didnt make the ECF. These are the good days, never forget them, as they are few and far between
mccaw didn’t get a 4th ring😢(LOL)
I don’t even like basketball and that was still embarrassing. Fuck Boston. (Damn, which Boston team hurt you?)
I'm not mad, just disappointed. I thought we were over choking in the 4th?? lmao (Just mom code for mad)
The Pascal Siakam Hate Party
Toronto Raptors just couldn't get over the Boston Celtics and the Pascal Siakam hurdle
If Pascal Siakam had not played tonight the Raptors probably would have won this game. That's how bad he affected the outcome.
Lmfao Pascal airballing a 3 perfectly explains his play this whole series.
Siakam just trying to set himself up to win most improved again next year after this performance.
I WANT TO PUNCH SIAKAM RN! DONT COME BACK TO TORONTO JUST STAY IN FLORIDA
Am I colorblind or was Siakam wearing green this game?
The 6th man award should go to siakam. He carried the Celtics bench!
Everyone is going to analyze this game to death, but its pretty simple. If siakam doesn't turn the ball over 80 times they probably win.
Literally Siakam should have worn a Celtics jersey
Fuck Siakam. Trade him to the bucks.
I don't wanna hear siakam being compared to Tatum ever again
GG goodbye season thanks Pascal you did great playing for the Celtics
Proud of the boys for making it this far without a superstar but my god, Pascal in the bubble was one of the biggest choke jobs I’ve ever seen.
Siakam got some soul searching to do.
Head up guys. Amazing season. Nothing to be ashamed of.
Except Pascal. We can be ashamed of him.
Clippers fan here. Wtf happened with Siakam? Anyways, hard fought series—you guys have heart.
Siakam better come back a monster next year. I have a feeling the city is going to turn on him (Too late)
The real question is how many picks are we gonna have to give up to get rid of Pascals massive contract?
watching trashcal play today made me miss Derozan for the first time in a long time
Bit of That Good Old Canada Positivism
It was a fun season guys, GG. Hope we come back stronger next year, I have no idea how but I believe in Masai.
Teams played each other hard and you can tell there was no bad blood at the end. Great series.
On a positive note..what a damn season! Everyone counted us out and said the Raptors would be terrible and they took Boston to a game 7 inside the bubble (shooters dream). Going to be an interesting offseason.
That's it for this series! Onto Miami we go! Our very own Kevin Negrón wrote up a great preview article you should check out!
Follow me on Twitter for more! @Serendiptious or come see me on Instagram serendipity_maybe