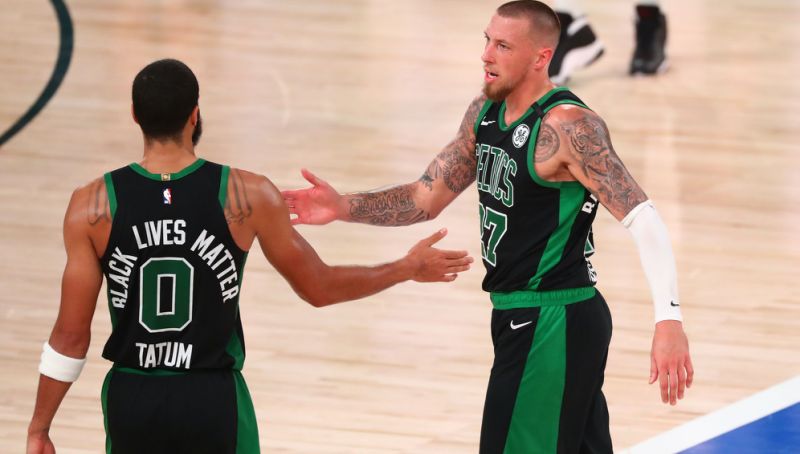 With their playoff lives on the line the Boston Celtics managed to pull out a massive win against the Miami Heat, and extended the series at least one more game. I came into this game with a tremendous amount of confidence in them, although that confidence quickly began waning as the first quarter went on. They found themselves down by 12 early, but that was Miami’s biggest lead of the game, and as the game progressed the Celtics started to gain their rhythm. Ultimately it was the third quarter where the Celtics started to look like the team that we all expected them to be, much to the surprise of probably most Celtics fans considering how the rest of their 3rd quarters have gone in these playoffs. It was their second half effort that determined the outcome of the game, and thankfully the Celtics came out on top. Now let’s break down how they did it and see how they can repeat it in game 6.

The very first thing that jumps out to me, they finally started taking care of the ball. In game 4 they ended the first half with 11 team turnovers. In this game they ended with 11. In fact, Miami turned the ball over more times with a total of 12. These weren’t all just “hey, look what I found” turnovers either. The Celtics went after the ball and got strips and deflections to generate 7 steals to Miami’s 3. This is how you win games. They finally started valuing their possessions and they tightened up their defense as well.

Brad Stevens on what ignited us tonight: "I thought we played with great tenacity defensively, and I think our offense followed suit."
— Boston Celtics (@celtics) September 26, 2020

Both teams attempted 29 free throws, yet the Celtics fouled 23 times to Miami’s 29. Part of this is because of the Celtics fouling Miami’s jump shooters, or in Theis’s case standing straight up and getting jumped on by Dragic, or in Kemba’s case catching Butler’s forearm to the chest, but I digress. There were more than a few calls that I think were pretty obvious that went against the Celtics, but at his point bad calls are part of the game, and I’m sure Miami fans could make their own list of calls they felt went against them too. The bigger significance of this is that while the Celtics felt like the calls were going against them, they continued to stay focused and aggressive, forcing the refs’ hands into calling fouls for them. 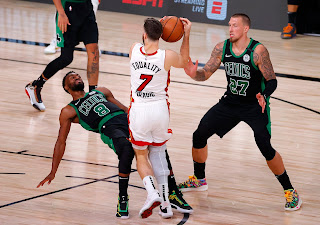 Tatum was a big part of this, getting himself to the line 14 times in the game and hitting on 12. Kemba, Smart, and Theis each got themselves to the line 4 times, but the one surprise was that Jaylen only attempted one free throw all game. He put up big numbers at 28 points and 8 rebounds, the second highest scorer behind Tatum’s 31, but I still thought he could be more aggressive. He was fourth on the team in touches behind Tatum, Smart, and Kemba in that order. He was the driving force in game 3(pun intended), and his aggressiveness is what put the Celtics in the driver’s seat that game. He can really cause some issues for Miami if he adds that to his attack plan in game 6.

Not only does it provide good looks in the paint, but it helps to put Miami in foul trouble. Kemba Walker had a team high 5 fouls for the Celtics followed by Theis and Smart with 4. On the Heat side Butler and Duncan Robinson had 4, Adebayo had 5, and Dragic ended up fouling out with 6. All four Heat players saw limited minutes and forced Spoelstra to go deeper into his bench as a result. The fouls also took them out of rhythm, allowing the Celtics to go on a 20-3 run in the third.

The 3 for Miami? A prayer from Dragic.

Best Celtics minutes of the series.

The one area that it seemed like the Celtics were really lacking was in containing Goran Dragic. Towards the end of the third quarter it seemed like he was scoring a layup at the end of every possession, and the sole 3 from that 20-3 run came on a tough corner shot from him. Dragic ended with a team high 23 points on 47.1% shooting and got himself to the line with 7 free throws. Many of the shots that he hit were incredibly difficult, so props to him, but the Celtics need to do a better job of both forcing him to his right hand (his off hand) and of keeping him out of the paint.

I’d also add that the Celtics just need to come out stronger in the first half. In game 4 it was too little too late, but luckily that wasn’t the case in game 5. I don’t want to see what happens if they do the same in game 6. Part of that comes with taking better shots and doing the easy things. In the first half it looked to me like Marcus Smart was forcing and missing a lot of difficult layups while trying to draw contact, but eventually slowed it down. Jaylen Brown commented that the Celtics played like they were trying to win the whole series in the first quarter of this game, but they eventually settled down and focused in.

Jaylen Brown: "We were trying to win the game in the first half ... We just needed to settle down a little bit, and when we did, shots started going down."
— Boston Celtics (@celtics) September 26, 2020

And finally, I can’t go without shouting out Brad Stevens, Daniel Theis, and Enes Kanter. I’d like to start off by saying that Brad has been widely criticized in these past two series’ and at the end of the past two seasons. Yes, he is the head of the team, yes he has had a lot of talent on his teams, and yes they haven’t made it to the finals yet, but he has taken the Celtics to 3 of the past 4 Eastern Conference Finals, and it’s not by luck either. Listening to Brad in the “mic’d up” moments makes it so hard for me to see why he receives so much criticism. His teams have been incredibly young and inexperienced, and while he can’t go without any blame, much of the team mistakes come down to poor execution on the court. Much of the game is out of his control, but in these playoffs and in this game specifically he has made some ballsy adjustments that have paid off. 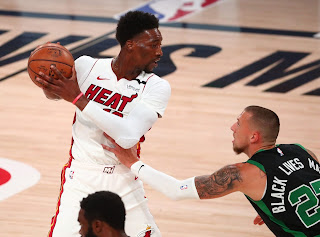 In game 4 Enes Kanter had a DNP. In this game he had 10 huge minutes with 8 points, 4 rebounds, and 2 assists off the bench. Kanter is often seen as a defensive liability making it hard for him to get minutes, especially against a team that moves as much as Miami. Still, he provides good size, inside scoring, and offensive rebounding, so when Brad saw Miami going small, he brought Kanter into the game to get some easy low post buckets. Not only that, but it provided Theis with some much-needed rest before half time.

Theis seemed rejuvenated in the second half, playing some of his best basketball in these playoffs. He provided the Celtics with 15 points, 13 rebounds, and 3 blocks. His energy jump-started the Celtics run in the third, and he also provided a good counter to the Miami zone that had been giving the Celtics problems for so long. Theis and Kanter’s contributions in this game were instrumental in helping us get the win.

Who played the most minutes of the second half for Boston? Not Tatum. Not Brown. Not Kemba. Not Smart.

So to summarize everything, keep being aggressive, get Jaylen more touches, come out of the game like they did in the third quarter of last night’s game, protect the paint, and continue to play the Celtics basketball that we all know and love. When they’re moving the ball around and everyone’s making shots it just makes the game so much easier for them. The series now sits at 3-2, but they’re still taking it one game at a time, and the pivotal game 6 will take place at 7:30 PM tomorrow night. Let’s go Celtics!