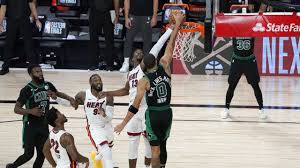 Erik Spoelstra’s South Beach Crew had cooperated by coming up empty on two of their first three tries in the new stanza. To that point, the Heat had eight conversions in their 25 possessions while the C’s had succeeded on exactly half their 26 opportunities.

But from the Tyler Herro Turnover that led to Wanamaker’s cash-in (at the 10:40 mark) until Jimmy Butler and Bam Adebayo misfired on jumpers in the half’s final 30 seconds, Boston earned a “stop” on just TWO of the Heat’s next 17 possessions. (Miami fashioned streaks of nine and six consecutive conversions.)

But for the Heat’s “rust” at the charity stripe – a sorry one-for-four – the Celts would have been losing at the intermission.

In total, the Heat converted 16 of 22 possessions in Q2 – then matched that total on just 21 tries in Q4 … that’s a Conversion Rate of 74 percent for those 24 minutes of play!

I guess an optimistic Celtic fan can find some solace in the boys pushing this contest into OT despite such ridiculous numbers for such long stretches.

While venting your frustrations over a “bad loss,” keep in mind that things could always be worse …

… for instance, you could be a Clipper fan.

I’ve often quipped of my confidence that the franchise that began as the Buffalo Braves will never be allowed by the basketball gods to win an NBA championship in my lifetime, generally adding that the very “shock” of the team reaching the Conference Final might just be enough to kill me.

Almost found out the hard way.

Related: Has Paul Pierce Been “Buffaloed” by the Clipper Curse?