Can a Gordon Hayward return spark a Celtics ECF comeback?

In the history of the Conference Finals, teams have a 6-52 record in series in which they’re trailing 2-0 and after a sloppy 106-101 loss last night, the Celtics will be looking to be just the seventh team to comeback from the deficit. The Celtics, who were up by 17 late in the 2nd quarter, got outscored in the final 6 minutes of the 3rd quarter 23-6. The Celtics in the second half shot 37.9% from the field to go along with 12 turnovers which was a complete turnaround from their performance in the first half in which they shot 58.1% with 8 turnovers. Their sloppy play along with Miami’s lengthy zone defense really frustrated the Celtics last night, in fact it was heard by reporter’s post-game:

I don’t see a problem with this, and strangely enough, I’m pretty happy to see it. What comes with being a part of a family or team, is you’re going to have disputes. It is impossible to not have disagreements with each other so scenarios like this are going to happen within a team. I think it’s a good sign for a group of competitors to show frustration and passion when games don’t go the way they anticipated. Emotions were obviously high after losing a close playoff game but it is good to let out their frustration and now it is time for the Celtics to talk to one another, listen to these complaints, correct them and get back to playing championship basketball.


Jaylen Brown: "We embrace each other for who we are. Who Marcus is...I love him for it. We gotta get ready to come back with that same fire for Game 3." 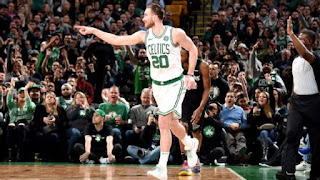 It is no secret that the zone defense Miami is playing has been very effective. They put some lengthy players up top and it has really been disrupting the Celtics offense. They couldn’t get a good rhythm going in the second half and the Heat took full advantage of it. The Celtics are playing in a must-win Game 3 Saturday night and the Celtics would love to see Gordon Hayward on the floor with them again. Hayward, who averaged 22 points per game in two games against Miami this season, hasn’t played since mid-August with a Grade 3 ankle sprain. At 6’7, the lengthy forward with his offensive and playmaking ability could really turn this series around. Brad Stevens has been the focus of many Celtics fan’s complaints through the first two games of the series due to being dominated by Miami’s zone this series. In 32 Celtics possessions against Miami’s zone, the Celtics only scored 25 points which is completely unacceptable and something they definitely need to fix if they want to make it through this series. The Celtics have been really missing Hayward who has been solid all year averaging 17.5 PPG, 6.7 RPG while also adding 4.1 APG. No part of me thinks the Celtics are done. The last two Eastern Conference champions came back from a 2-0 deficit and after a good workout and an extended break between Game 3 and 4, Hayward might be able to return Saturday night and be the savior for the Celtics and their dreams of championship 18.

Gordon Hayward is progressing toward returning for Game 3 of Celtics-Heat after feeling good in Wednesday’s post-practice workout, a source with knowledge of the situation told @TheAthleticNBA. He expects to get more on-court work Friday with the hope of playing Saturday.