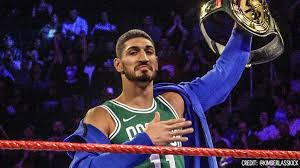 Unfortunately, the future endeavors of one Boston Celtic took a hit even as Brad’s Boys were winning their fourth straight contest in the NBA’s “Silver Bubble” Tuesday evening. Early in Q4, 265-pound back-up center Enes Kanter was assessed a Flagrant Foul against Grizzlies’ rookie forward Brandon Clarke. Despite about a 50-pound weight disadvantage (not to mention the excessive nature of the offense), the Memphis rookie managed to connect on a 10’ follow-up of his own missed FGA.

The personable Kanter, who briefly held the WWE’s coveted 24/7 Championship last summer, may have taken a little of the luster off his prospects for a post-hoops career in an “industry” that rewards appearance over reality.

On a side note, Kanter’s aggressive faux-pas (along with Clarke’s stout follow-through) threw off my conversion count for Q4 at first – I was improperly tallying those two Clarke foul shots as a separate possession (a Free Throw conversion) … what should we call that pair of FT’s, an “and-1-plus-1”? 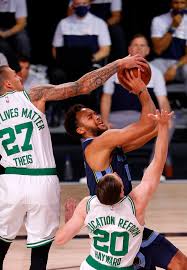 Memphis did wind up with two more offensive possessions in Q4 than did the C’s – one due to the possession loss from the flagrant foul, the other because the Griz had both the first and last official opportunities to score. [In the same manner, Boston was +2 in possessions in Q2, Jonas Valenciunas the overly aggressive defender in that instance.]

Amping up the FGD

After allowing the Bucks and Blazers to make nearly half their FGA’s (.482) in the opening seeding games, the Green Gang has demonstrably tightened its loose defensive screws, most impressively last week while limiting the defending champs to 43 percent shooting (a comparable CV%, as well).

In their last two victories, the other guys have collectively shot 76-for-191 (.398) from the field.

I’m beginning yet again to wonder if old friend BDiddy has rejoined us.

I saw a 10-deep “dream” playing rotation for next year’s team that seemed to have purposely excluded Marcus Smart … that sure sounds like my old pal at his most illogically contentious – or maybe a disciple?