Get hyped! The 76ers it is. Philly will be playing without all-star Ben Simmons of course as he is likely out for the season. Then again that might mean he just misses out on four playoff games.

The 2020 Eastern Conference Playoffs are locked. 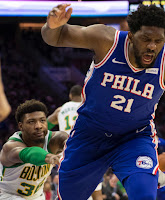 The Heat/Pacers should be a solid 1st round match-up as well. Looking for the Celtics to win their series in 5. Don't need them messing around with extra games and potential injuries.

The Toronto Raptors will almost definitely be the Celtics 2nd round opponents as they are facing the seriously undermanned Nets in Round 1. If the Nets were to win that series, it might be the biggest upset in NBA history.