Brad Stevens said Gordon Hayward — who sprained his ankle in game one against Philadelphia — left the Bubble on Friday. Stevens said that he doesn’t have a concrete timetable for Hayward’s return, but expects him to be back when his ankle is healthy.
— Malika Andrews (@malika_andrews) August 23, 2020

Boston's Gordon Hayward has left the NBA bubble and plans to return when he is close to playing again after Grade 3 ankle sprain.
— Shams Charania (@ShamsCharania) August 23, 2020 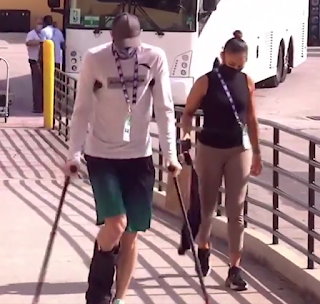 Before anyone chimes in with, "How dare Hayward leave his teammates in the middle of the playoffs?!" please remember we are in the middle of a pandemic and Hayward's wife is approaching the due date for their baby's birth. It's not like Hayward can't rehab his ankle back home,. It would make no sense for him to remain in Orlando right now. As soon as Hayward is getting close to a return, I'm sure the Celtics will have him return, so he can go through quarantine and be ready to play when he's cleared.

Hayward was already expected to leave Orlando for a few days in September for the birth. It's possible that might overlap with Hayward being back home rehabbing.

What Hayward and the Celtics do know is that he won't be back any time soon. Because of that, Hayward said he is looking at the possibility of scheduling the impending birth of his fourth child during the time he is out.

The Celtics had been prepared for Hayward to leave the team for a few days at some point in September to be with his wife, Robyn, for the birth.

"I think it's two separate things," Hayward said, referring to his injury and the impending family addition, "but it's something I'm taking a look at. It's just very unfortunate of the timing of the whole deal, so I think I'm just trying to take it day by day, and we're looking at scheduling for the baby and all that stuff, so it's taking it day by day.

While the Celtics were able to get past the 76ers easily without Hayward, don't be fooled into thinking he's not needed. The Raptors bench scored a record 100 points yesterday. The Celtics bench has been putting up closer to ten in the playoffs. Obviously with Hayward out and Smart starting the bench takes a hit. Whether Hayward returns as a starter or Smart status in the starting 5 and Hayward comes off the bench, the Celtics will need the added firepower in the conference finals and NBA Finals. It's been a recurring theme in 2010, and then 2012, and again in 2017 and 2018 of the Celtics going to a game 7 and then running out of gas offensively in the 4th quarter. So yes Hayward is gone right now, but still a big part of this championship puzzle.