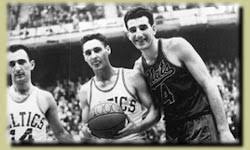 In the official (and in many ways rather parochial) annals of the National Basketball Association, only three of the league’s 11 original franchises – the Celtics, Knicks and Warriors – have operated continuously since the Basketball Association of America’s inaugural 1946-47 season. But three more of the circuit’s now 30 organizations came into “professional” existence that very same season … and ironically all three would establish a rivalry with our own Boston Celtics.

In Detroit, a team called the Gems was launched that season. Alas, they proved to be not a jewel but a trinket, losing an astounding 40 of their 44 games before re-locating to Minneapolis for the following season. Apparently, the new Lakers passed through Chicago along the way and picked up a fella named Mikan. 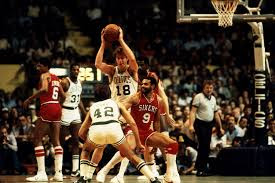 Another brand-new team called the Buffalo Bisons uprooted even more quickly to Moline. But owner Ben Kerner’s much-traveled and re-named Hawks would be squaring off with Mr. Russell’s Celtics for championships in a little over a decade.

And in the summer of ’46 – as Walter Brown and the other large-market arena operators were conjuring up their league in a fancy New York hotel – a more small-scale businessman a little further upstate was contemplating entering his locally successful barn-storming ballers in the National Basketball League, which dated back to 1937 and was bouncing back from the lean war years.

[Side-note: The NBL was hanging on by a thread during WWII, fielding just four teams for the ’44-45 season. Curiously, the 1945 NBL champions are still in existence, have even won an NBA title during the 21st Century. Can you deduce (without googling) the identity of this franchise, the NBA’s longest continuously-running organization – dating back to 1941?] 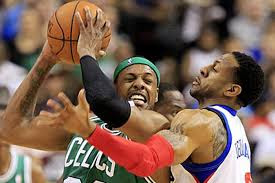 A true hoops junkie, Syracuse bowling-alley “entrepreneur” Danny Biasone was always on the lookout for good competition for his barn-storming hoopsters. When he thought a successful outfit from Rochester was ducking him, he decided to pony up the $500 and join the league they played in. His team would come up short against Lester Harrison’s Rochester Royals that post-season … but from that first year until Ol’ Danny Boy sold the team to Philadelphia interests in 1963, the Syracuse Nationals would never fail to qualify for the playoffs.

The Nats (along with Kerner’s vagabond Hawks) would join the new National Basketball Association through the 1949 merger. The Royals and Lakers had jumped leagues the season before – Mikan’s crew would go on to win five of the next six championships, their run interrupted only by the Royals in 1951.

As for Syracuse and Boston?

This most prolific of playoff rivalries was born in the spring of 1953 when the second-place Syracuse Nationals squared off with Red Auerbach’s third version of the Boston Celtics in a best-of three East Division Semi-Final series. After the Celtics swiped home-court advantage with an 87-81 victory, Bob Cousy’s 50 points wrapped up the series two nights later in four overtimes, 111-105.

Not unless you’re infatuated with stalling and a lot of foul shots. Cousy made 30 of 32 free throws, and this game helped create the impetus for the birth of the shot clock two seasons later. 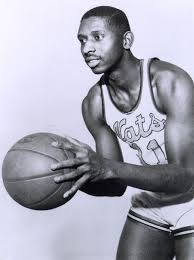 During the regular season, each team had successfully defended its home court five times (splitting two neutral court matchups, as well), and the pattern continued until Syracuse broke through in Game Four to close out the series.

They went on to struggle past Fort Wayne in seven tough games, becoming the first team with black players, Earl Lloyd and Jim Tucker, to claim an NBA title. [Interestingly, the 1955 NBA Finals, which were played under the 2-3-2 format, is the only NBA championship series in which every game was won by the home team.]

By this point in time, Auerbach and Bob Cousy had engineered an offensive juggernaut in Beantown. But the not-ready-for-prime-time Celtics kept running into a playoff roadblock on Interstate 90, losing to the Nationals the three seasons leading up to Russell’s auspicious arrival. 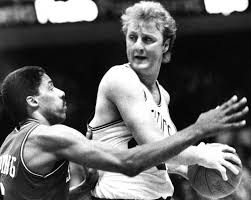 This rivalry, which just completed its 21st iteration and fourth sweep, has featured three multi-year stretches. As noted, the Nats were victorious from ’54 to ’56 before falling (in a 3-0 sweep) on Red’s first title run in 1957. The Pennsylvania portion of the confrontation kicked off with five consecutive spring faceoffs (’65-’69), the 76ers prevailing only during their iconic 1967 championship run. And the 80’s opened with three consecutive ECF scrums, a young Larry Bird’s crew scratching out only one success in 1981. [Counting 1977 and 1985, Julius Erving defeated the Boston Celtics in three of his five post-season tries.]

Alas, this classic confrontation has become all but dormant since Bird and Doc’s day, occurring about once a decade and seeming as much an occasion for nostalgia as for competition.

For the record, the C’s currently are on a 35-year 4-0 winning streak. 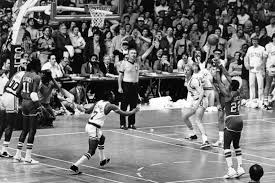 The simple matter of geography has prevented these two vaunted franchises from ever having met in the final round of the playoff tournament.

But through 20 post-season encounters – 2020 remains to be determined – the winner of a Celtic-Nat/Sixer playoff series has captured 10 NBA titles and reached the Finals on six other occasions.