Celtics have one of the easier remaining schedules

The Celtics now know their final pathway to the playoffs as the NBA looks to complete the 2019-20 season with a mad rush of regular-season and playoff games inside their (hopefully) coronavirus-free bubble in Orlando, beginning July 30.

The league revealed the eight-game regular-season finales for all 22 teams competing for the championship, and the Celtics good some good news as they look to improve their playoff seeding and their chances of capturing the 18th title in franchise history.

According to NBA odds and lines released in early June, when the league announced it would be returning to the court in Orlando in late July, the Celtics were installed by Westgate Superbook as tied with the Houston Rockets as the fourth most-likely champion at 16-to-1. Only the Los Angeles Lakers (5-to-2), Milwaukee Bucks and Los Angeles Clippers (3-to-1) had better odds of hoisting the championship trophy.

Interestingly, though the Celtics trail the Toronto Raptors by three games for second place in the Eastern Conference, Westgate has the Celtics as slightly better favorites to win the title, with Toronto listed at 20-to-1. 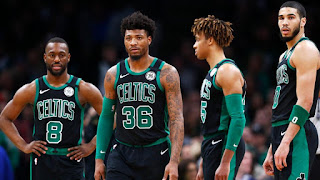 Part of that reasoning may have been revealed on Friday night, when the NBA announced the eight-game resumption of the regular season before a potential play-in series for the eighth seed in each conference, followed by four rounds of playoffs, with each series a best-of-7.

According to analysis by the Associated Press, the Celtics have the fifth-easiest schedule of eight games among the 22 teams invited to the Disney Orlando “bubble” to complete for the championship. Only the Brooklyn Nets, eight-seed-leading Orlando Magic, Philadelphia 76ers and eighth-seed contender New Orleans Pelicans had easier schedules.

On the flip side, the Raptors will play the second-hardest schedule of any team other than the Denver Nuggets and the hardest among all Eastern Conference teams.

The critical matchup for the Celtics comes in the fifth of their eight games, when they face the Raptors head-to-head. The Celtics will open regular-season play on July 31 against the East-leading Milwaukee Bucks. The Celtics next play the Portland Trail Blazers Aug. 2, the Miami Heat on Aug. 4 and the Nets on Aug. 5 before the showdown with Toronto. The Celtics’ final two games are against the Memphis Grizzlies and Washington Wizards, with dates to be determined.

The playoffs will only feature 16 of the 22 teams invited to Orlando, meaning that some teams are still battling for the No. 8 seeds in the NBA standings, with one spot up for grabs in each conference.
The Portland Trail Blazers, New Orleans Pelicans, Sacrament Kings, San Antonio Spurs and Phoenix Suns all are within six games of the No. 8 seed Memphis Grizzlies in the West, while the Washington Wizards are 5.5 games back of the No. 8 seed Orlando Magic in the East.

In order to finish the regular season to determine the final playoff berths, the league will have all 22 teams play eight games, staggered over a few weeks.