Are you more disturbed that Jabari Parker was out in Chicago with coronavirus or that TMZ referred to him as a "star"? 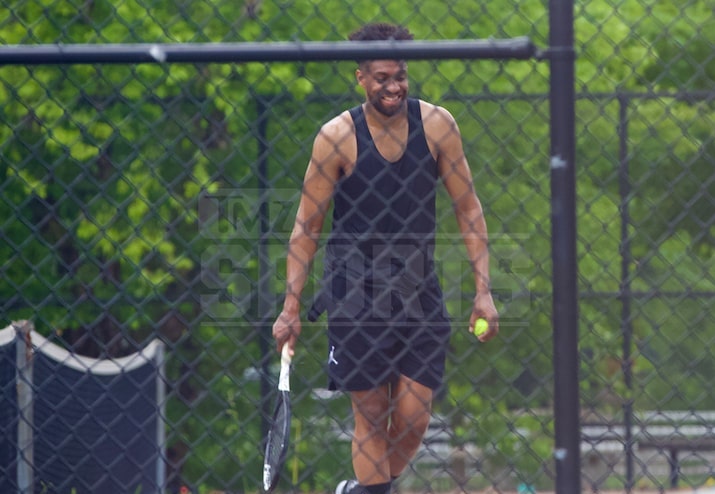 Jabari Parker just told the world he'd contracted coronavirus -- and less than 3 days later, the guy doesn't appear to be in isolation ... but rather, he's playing tennis in public.

The Sacramento Kings star was spotted Saturday in Chicago's Longfellow Park, where he was rallying with a buddy on the other end of the net ... all smiles, and without a mask. Mind you, he'd just announced a few days earlier that he had test positive for COVID-19.

Another somewhat troubling sign -- sources tell us Jabari was recently seen out at a restaurant there in the Windy City.

You are required to quarantine for 14 days following a positive test. Additionally NBA players are also required not to exert any physical activity. It's possible that Parker's 14 day period had just elapsed. If not the alleged restaurant outing is likely more problematic than the tennis match. The Kings are reportedly investigating the matter.

I just spoke to Jabari Parker and he has finished his in house quarantine. He was playing tennis in his home town of Chicago and was in complete social distance from anyone. https://t.co/voiZSX8hC3
— Ben Stinar (@BenStinar) June 27, 2020

Now on to the Quarantine Question of the Day!

Today's question:
Are you more disturbed that Jabari Parker was out in Chicago with coronavirus or that TMZ referred to him as a "star"?

Obviously this question is rather tongue in cheek. In one instance you have someone who was reportedly mingling with the public while still possibly being contagious with a deadly virus. In the other instance I have a pet peeve with reporters that label any NBA player that ever played in the league a "star." Jabari Parker has played on five NBA teams prior to his 25th birthday. I'm sure many NBA fans weren't even aware he was on the Kings. He's a journeyman. Far from a NBA star.

Anyway, wear your masks and social distance people. You can spread the virus even if you don't have any symptoms. Also, media stop referring to every NBA player as a "star." Unless it's Brian Scalabrine or Tacko Fall.


Unfortunately we will have no recaps or Green Envy's for a while, so figured it might be fun and give people a distraction to debate in the comment section on a different question every day while we are stuck in this new normal.

Previous Quarantine Questions of the Day:
What's the most unique pandemipurchase you've made since this started?
Do you buy the story that M.L. Carr attempted to team Michael Jordan with Dominique Wilkins on the Celtics?
Which NBA player will return from inaction having gained the most body fat?
Who are some of the best passers in Celtics history?
Why is Bill Russell overlooked in the G.O.A.T. conversation?
Have the Celtics ever had more All-Stars than the 8 they had in 2002?
Which starting 5 would you pick?
Remember this Bird/MJ commercial and who do you think would have won?
Who wins a HORSE competition between all-time Celtics greats?
How many left-handed C's can you name off the top of your head?
What are some of your favorite buzzer beaters in Celtics history?
You're 18 yrs old, off to college, & your roommate is which Celtic?
Who was a player you hated... and then he became a Celtic?
Who are your favorite non-Celtics players in today's NBA?
Who is the best looking Celtics player in team history?
Who are the best ball handlers in Celtics history?
Which five Celtics in team history had the best post moves?
What's the greatest Celtics game you have attended?
Who are the five toughest Celtics in team history?
Who was your favorite Celtics player while growing up?
Name a former Celtic who would excel in the modern NBA?