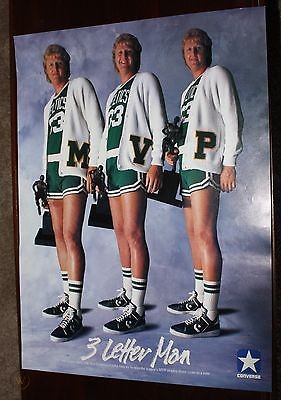 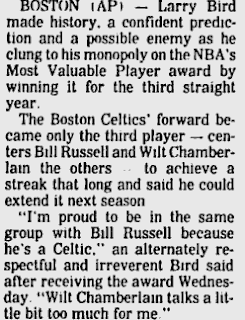 But Larry Bird’s claim to hoops immortality was confirmed on this day 34 years ago as he became the second Boston Celtic and only the third – and last – NBA player ever to be recognized as the Association’s Most Valuable Player for three consecutive seasons.

In a landslide, the Birdman received 73 of 78 first-place votes from a panel of media-types, easily outdistancing runner-up Dominique Wilkins.

(Curiously, it was during his 5th-thru-7th seasons in the league that both Bird and Bill Russell accomplished their three-peats … the third member of the club, Wilt Chamberlain, was MVP in each of the three full seasons he played for the 76ers, his 7th-thru-9th. Russ has three rings to show for his run, Larry two, the late Wilt just one.)

While today’s training techniques have pushed the “measurables” of athleticism through the roof, the impressive specimens it produces tends to create a “backlash” regarding the capabilities of players from the days of yore, even guys like Larry Legend. 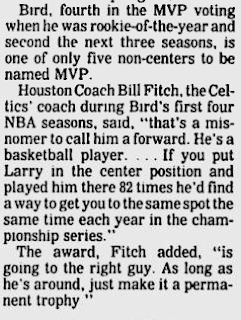 The NBA’s very first MVP was acknowledged in 1956, one season after the same dude had snatched the Rookie of the Year Plaudits … and was in many ways a precursor to the kind of player Mr. Bird grew into. Unfortunately, I never got to see Bob Pettit play.

It also strikes me as odd to learn that the NBA’s ROY award is three years older than the MVP ???

… but only the Celticslife vault can give you the last word on his 33 greatest passes, as rated by Professor Parquet himself.

Check it out when you have a few spare minutes.