Players were given an update yesterday during their conference call with the NBA Players Association regarding what to expect if and when the season resumes. Not only that, but to be prepared for another unique experience next season.

If the 2019-20 season resumes, no fans are expected. And that could be the case as long as there is no vaccine.

40 percent of the league’s revenue comes from fans. 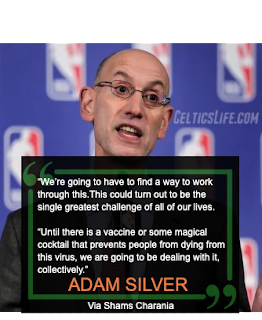 A decision on the season can go into June.


Players were told if the season were to resume, expect it to be played in either Las Vegas or Walt Disney World. Silver also expressed to the players, “We’re going to have to find a way to work through this. This could turn out to be the single greatest challenge of all of our lives. Until there is a vaccine or some magical cocktail that prevents people from dying from this virus, we are going to be dealing with it, collectively.”

Basically the resumption of the 2019-20 season remains a fluid situation. The next month and how the virus fares in the United States with the easing on some restrictions will be a main determine factor if the season resumes or not. My hunch is that next season will remain a fan-less experience.