Were you aware that in his very last regular-season performance in the NBA, the great Bill Russell and his team were relegated to the role of “curtain-jerker” – the opening (i.e. less important) act, presented when the audience is still settling into its seats?

No wonder he and the boys may have seemed a tad “miffed” on their way to Banner No. 11, huh?

In fact, the NBA chose to conclude its 1968-69 regular season on Monday March 24th with an old-fashioned NBA Doubleheader staged in Philadelphia’s fancy new arena, the Spectrum. After having defeated the division-winning Baltimore Bullets Sunday at home, the Celtics traveled to Philly to face the year-old San Diego Rockets, then kick off their opening-round playoff series with the second-place 76ers two nights hence in the same building.

Exactly thirteen days later on Easter Sunday – THIS DATE IN CELTIC LORE – these weary travelers launched their Eastern Division Final series in Madison Square Garden against the at-long-last competitive and third-place Knicks, who’d stepped up and swept away those imposing Bullets (including MVP/ROY Wes Unseld) in Round 1.

The Celtic Hero of the Day was hardly unknown to the New Yorkers or their fans.

A Chicago kid who stayed home to play his college ball at DePaul, Emmette Bryant was the Knicks’ seventh-round choice (No. 55 overall) in the 1964 NBA Draft – the last of the 16 selections from that Draft Class who’d log eight or more seasons as a pro.

After four seasons in the Big Apple, the Phoenix Suns snatched up Bryant in the expansion draft before shipping him Red Auerbach’s way in exchange for a second-round choice in the ’69 NBA Draft. Though averaging only 17 minutes-per in his 80 regular-season appearances, Em earned a spot in Coach Russell’s eight-man playoff rotation and averaging 33.6 minutes in 18 post-season outings.

I was able to document 10 “double-doubles” in the career of Emmette Bryant, but this Easter Explosion seems to be the only one which occurred in the post season. 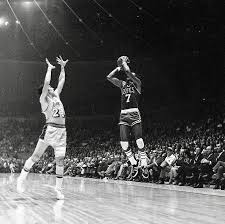 On the heels of the 1969 Championship and “sudden” retirement of Mr. Russell, Bryant provided veteran leadership to Coach Tom Heinsohn’s initial squad before being lost to the Buffalo Braves in the 1970 Expansion Draft.

Kimball and Barnett (long-time GSW announcer) share the dubious distinction of being the only two men to play a full season for the C’s during the 1960’s and NOT win an NBA championship.

Can you identify the year of this April 6th "episode" as recounted in this snippet from the next day's Reading (PA) Eagle? 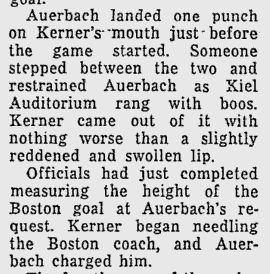