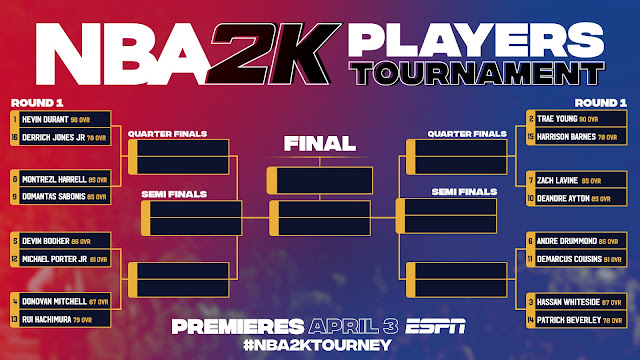 With the 2019-20 NBA season suspended along with most other sports in the world, there's hardly anything new to watch sports-related to get excited about. Unless you're a fan of video games like NBA 2K. Starting tonight (Friday, April 3), the NBA will host an official NBA 2K20 Players Tournament, featuring 16 of the league's biggest names in a battle of the controllers, all for a good cause. Running until Saturday (April 11) and broadcasted on ESPN and ESPN2 and streamed on Twitch and Facebook, the tournament will be played in a single-elimination style with the champion choosing a charity to receive a $100,000 donation from NBA, the NBAPA, and 2K Sports, in support of coronavirus relief efforts.

While no Boston Celtics are represented in the tournament, the event should certainly be an entertaining one to watch, given the field of personalities set to hit the ol' Xbox. With the bracket now published for the public, it’s time to do what every sports fan likes to do whether or not they admit it — make predictions, boast about the ones we get right, and complain about the ones we get wrong.

If you’re looking to bet on sports during the quarantine, the 2K players tournament is likely not the route to go. With very little information about the skill of the competitors at NBA 2K20 and extremely skewed odds, try your hand at Belarusian hockey or table tennis, instead. However, if you’re set on putting something on the line for the 2K tournament or you just want some opinion-based insight from someone who has seen some of these guys play the game, I got you.


First off, don’t be fooled by the seeding of the tournament; they are simply based off of the player’s personal 2K player rating, making future hall of famer Kevin Durant the 1-seed, set to face off against Derrick Jones Jr. of the Miami Heat, who already won an individual NBA event this year. Entering tonight as the 5-seed, Phoenix Suns all-star Devin Booker is booked as the pre-tournament betting favorite to win the tournament due to his highly-touted reputation as a gamer. Booker enters the contest with a moneyline of +350; i.e. a $100 bet would result in a $350 profit if correct, the best odds of anybody in the playing field. However, don’t take the bait — while Booker’s skill at video games is undeniable and several in the league call him the best gamer in the NBA, his skillset at games like Call of Duty, where he is elite, may not translate to the format of an NBA 2K20 tournament where he has to go up against 15 other guys with an NBA-level basketball IQ.

In fact, Booker is likely not even the most intense 2K20 player in the field. He probably, at the very least, doesn’t vocally care about losing a game as much as some of his competitors.


The transition defense on 2k is the most frustrating thing in my life at this moment
— Kevin Durant (@KDTrey5) February 22, 2020

To win four games in a row of NBA 2K20 in a competitive environment with pride, ego, and dollar bills for a charity on the line is not something not everybody can accomplish, but if there’s anybody made for that moment, it’s the guy I have winning the whole thing. Today, I put it on the line and give you my complete bracket. Book it. (Not really, because you should take my opinions with more than just a grain of salt.)

While I am no expert on the 2K games of all the players involved and I, myself, am not putting anything on the line (even in the free game Streak for the Cash) for the tournament, I can put my predictions on record because it’s the closest I can get to sports right now. Below is me trying to make up for the lack of March Madness by pretending we are in the Sweet 16 stage and I’m filling out the rest of the tourney for all the marbles. 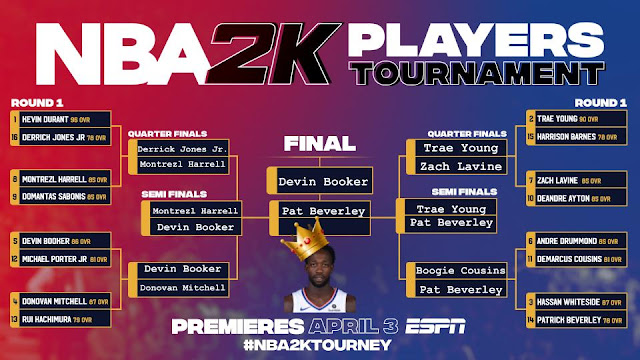 I got some bold predictions here, including long-time 2K player and 1-seed Kevin Durant falling in the first round. Why? Because I like bold predictions and I like people arguing them. It all ends with Los Angeles Clippers guard Patrick Beverley bringing a championship back to LA as the 14-seed. If you haven’t seen Beverley play 2K in celebrity tournaments, brace yourself — his play style and personality on the virtual court might be the most identical match with his real self amongst all competitors. He plays full-court defense, thrives on fastbreaks, and isn’t afraid to get physical. While it’s often annoying to play with or against Beverley, his strategies work way too often in the video game for people to not be afraid; it’s hard to win 4 in a row but Pat-Bev doesn’t care about the pressure. He’s got the grit to do it.

The competition kicks off tonight at 7 PM ET with the preview show, followed by the first game between the 1-seed Kevin Durant and the 16-seed Derrick Jones Jr. I’ll be tuning in — will you? Let’s get some predictions going in the comments section.