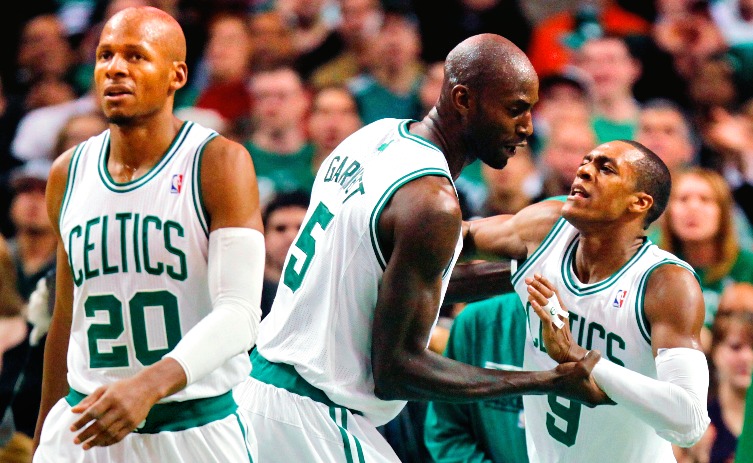 Ray Allen was a guest on Cedric Maxwell's podcast yesterday and of course the topic of the rift between the sharpshooter and his former 2008 champion teammates came up. With Kevin Garnett recently being selected to join the Hall of Hame and KG's jersey retirement ceremony in Boston in the queue for next season, is there a chance Ray will be there to show love to his former teammate? Not as things stand right now.

He told me that he & KG have to have a conversation before he’d attend HOF or #Celtics Jersey retirement.

Don’t u think it’s time for these 2 legends to talk it out?

"These guys kind of removed me from the 'Big Three,' said so many negative things about me and I haven't had one negative thing to say about any of them."

"We had tough times, we're brothers. We went through a lot. But that doesn't change anything that we've done. It hurt me over the course of this time just to hear some of the things that have been said."
"You're talking about nine years now and I've gotten so much hate, death threats, vitriol from Boston fans."

"As far as me being there, I think that is a subject that is really undecided yet. It would take Kevin and I to have a conversation moving forward."

Basically in the interview the same stuff is gone over. For the umpteenth time fans and I'm guessing his former teammates didn't care that he chose as a free agent to leave the Celtics. He was free to do so. What irked people is that he left and joined the Celtics number one rival at the time. The team that had just knocked the Celtics off in Game 7 of the Eastern Conference Finals. He basically did the Kevin Durant move before KD. With the added kicker that he joined a rival team (KG and the Celtics always looked at LeBron's team whether it was Cleveland or Miami as their rival. The Warriors defeated the Thunder, but at least they didn't have as much history).

Also let's be honest here by 2012 Ray had long been replaced by Rajon Rondo in the Celtics Big 3. Since the 2009 playoffs' first round versus the Bulls, Rondo had made the leap. And by 2012 Ray had regressed (So had Pierce and KG, but Ray was always the 3rd star in the 2008 pecking order. KG was the MVP candidate prior to his knee injury. Pierce was the go to scorer. Ray was the 3rd guy. Until Rondo knocked him down the pecking order. Sounds like in 2012 and still now Ray Allen felt like Rondo should have stuck in his own lane and let Ray be more of a star.

“Once you start winning that everyone starts wanting a piece of the large pie. When we won in 2008, you get to the point where you have young players and now All-Star teams want to be made, and more minutes need to be had, and it’s like ‘no, you actually have to go back to doing what you were doing.’ And we all had to appreciate that and respect that.”

Then there was the whole Avery Bradley promoted as a starter in 2012 issue. The 2012 Celtics made a great playoff run. Doc tinkering with the rotation and making Bradley a starter was a big boost. Bradley was an out of this world defender and he complimented Rondo more than Ray did at that point. Of course Ray was then willing to come off the bench with LeBron's (and Wade's) Heat.

Also I always had a hunch Ray was the anonymous source his former teammate at UCONN Donny Marshall would use when reporting dirt on Rondo which would be pretty shitty on Allen's part. Basically Ray wasn't a big fan of Rondo. Their relationship worked as long as Ray was the all-star and Rondo was the young role player. When Rondo became a face of the franchise and Ray regressed, the former couldn't handle it.

So even though Ray still doesn't get it, I do feel the vitriol he has received has been much worse than his crimes. I also would like everyone to make peace with each other. It's not like Ray was Kyrie. Allen actually helped Boston win a championship. They say time heals all wounds. It's been eight years. Apparently that hasn't been long enough. Hoping Ray makes it for KG's ceremony. They don't need to act all buddy buddy there or like "brothers," to quote the word most used by current NBA players about their teammates and some opposing players. But just play nice. Conversation or no conversation. But sure, have a conversation if it's needed Ray. For the sake of this topic not coming up every six months, please make up 2008 Celtics!

Would you like to see Ray Allen at KG's jersey retirement ceremony?https://t.co/6hkr6lRmPA