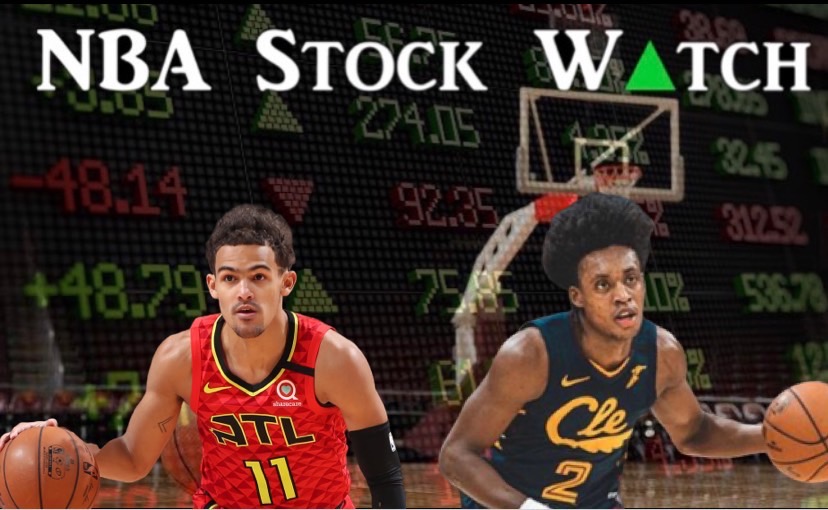 Welcome back to the delayed 20th edition of the Stock Watch! You'll have to forgive me, I've been sitting under the Bahamian sun all day and the Atlantis sportsbook all night since last Thursday, so am just getting around to writing this. And boy do we have a lot to catch up on!

Not only has it been extra long since we've last discussed the status of the NBA, but with the coronavirus swirling around and slowly penetrating into the sports world, there is a whole other realm to cover here. And although it hasn't had a huge impact on the league just yet, there is some mention of it below and it will surely lead to some other stock swings in the near future.

It's been a while since a household name wasn't featured here, but the young bull from Cleveland deserves the honor this week.

Headed into his matchup with Chicago, Sexton has been playing the best stretch of basketball in his young career. The point guard averaged 31pts, 4.5ast, 3.8reb, and 1.8stl through four games on the week. Sexton has changed the narrative about him, proving that he's a capable shooter in addition to his high motor and competitive demeanor. He shot 55.3% from the field, doing damage from many spots on the floor and carrying his team to a pair of victories and a career-high 41-point outing. As one of the lone bright spots of the Cavs, Sexton had a great week and is giving more reasons to jump on his stock.

Look, I've always been a Trae Young guy. I loved him at Oklahoma and had confidence that he could replicate his shooting ability at the pro level. That being said, the past week or so has not been his best.

Young is averaged 29.4pts this season - that number dropped down to 22 over his last three games. He is also averaging two fewer assists and one fewer rebound than his season marks. The Hawks youngster hasn't been converting on the type of shots we've become accustomed to him hitting. He shot 34% from the field and 26% from three-point land, highlighting his struggles in the one department he's most dominant in. To add insult to injury, Young led the league in turnovers at six per game. This talented 21-year-old has hit a minor roadblock in what has been a spectacular sophomore campaign.

As much as I wanted to give Aron Baynes the nod here (and he probably would've if not for a dud of a game on Tuesday), Wood has been playing the best basketball of his career. And I bet at least half of you don't know who he or what team he plays on!

The Pistons big man has stepped up in a big way since his tanking franchise shipped out Andre Drummond. In week 19, Wood posted 27 points and 9.3 boards through three games. While Detroit continues to lose basketball games, they are really starting to develop their youth, including their 6'10" 24-year-old. Wood flashed some versatility on the offensive end, shooting 62% from the field and knocking down two treys per game at an efficient 40% clip. Add this big man to your watchlist as his boost in opportunities has led to a rising stock value.

My goodness. Going into their Tuesday night matchup with the TWolves, the Rockets have been an absolute nightmare over their last four games. They may have started off hot after trading Clint Capela, but their strategy may be backfiring as of late.

Houston had many problems since last Monday. Three of their four games were against sub .500 teams and half of their contests were at home. Despite this, James Harden and his small-ball roster didn't register a single win. The Rockets lost a close one to the Knicks in New York to open their March schedule in the minus. They then had their one legitimate opponent of the week against the Clippers but got beat handily by Kawhi Leonard and the number two seed in the West. It only got worse from here. Houston then fell to the 21-win Hornets and 29-win Magic to cap off a trainwreck of a week in which they went 0-4. Sure, they beat the Timberwolves on Tuesday, but can the Rockets truly right the ship before the fast-approaching playoffs?

I can't remember the last time Orlando found their way onto this segment! It may not seem like it, but if the season ended today, the 30-35 Magic would be a playoff team. And they wouldn't even be the 8th seed! After rattling off three-straight wins and six of their last 10, Orlando is making a playoff push.

Since we last met, the Magic have looked impressive. They may have gone just 3-2, but their three victories have been dominant, winning by an average margin of 13 points per game. Plus, all three of those wins came on the road and two of them were over playoff teams. Believe it or not, the Magic have had one of the best offenses in the league over this stretch. Orlando is surging (for now) and continue growing their comfortable lead over the ninth seed in the East.

The Mavs have been slowly slipping down the power rankings in the Western Conference. Going .500 over their last 10 games is not doing them any favors to reverse that trend.

Since last Monday, Dallas went 2-3 lost some beatable games. They had Luka Doncic for all five contests, so there isn't much of an excuse for this team with serious playoff intentions. Their offense has sputtered at times, averaging under 110 points in their trio of defeats to the Bulls, Pacers, and Spurs. Suddenly, the Mavs are down to the seventh seed and will have some work to do in order to climb back out of that slot.

The Coronavirus is sweeping the United States and the sports world alike, raising concern and precautionary measures for all. It is certainly impacting basketball, as both fans and players are taking extra measures to avoid spreading any potential viruses:


sixers with the corona handshake i am unwell pic.twitter.com/wGuFDC41jP
— a 🦙 (@bagelspride) March 8, 2020


You might not be able to expect to high-five players out of the tunnel anymore, and maybe even attend games in general...

Richard Jefferson, former NBA player and current analyst, had the perfect comeback for a fan who asked him to say hi to his wife:


I guess this isn't technically considered a comeback if the fan wasn't chirping him...but you get the point. Super quick on your feet here, Richard!

Shaq has been rocking the bald head for a while now. You may not think much of it, but maybe there is a very, VERY good reason as to why he keeps his dome silky smooth - to hide his hairline!

After losing a bet, Shaq grew out his hair enough to reveal where his hairline sits at these days and...this can't be real:


That's it for this week. Hope everyone stays safe out there as the virus picks up! See you right back here on Monday.