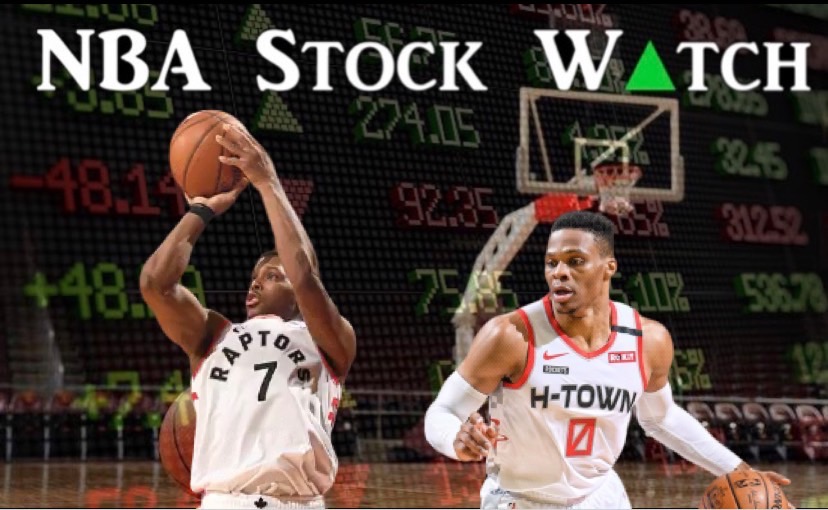 It seems like the 2019-20 season just started, yet here we are a month and a half away from the end of the regular season. In such a fast-paced world nowadays, the weeks go by in lighting speeds. It seems impossible to keep up with everything that's happening, let alone in the world of basketball.

As the NBA Stock Watch rolls into its 19th edition of the year, let's take a look at what you may have missed from the NBA over the last seven days.

I'm the first to be critical of Westbrook when he leads the league in turnovers and bricks. This week though, I can admit that the Rockets point guard has been playing great basketball.

Russ averaged 37pts, 8.5reb, 6.5ast, and 3.5stls over his last two games. Typically, his high-volume scoring comes at the expense of poor shooting. Not this week - Westbrook shot 50% from three-point range and 60.8% overall, making for some efficient offense. Brodie finished the week second in scoring and second in steals, highlighting his motor on both ends of the floor. He also was a +17 net rating, which was the fourth-highest mark in the NBA on the week. When Westbrook is playing at this level, he and his Rockets are hard to stop.

It's pretty simple - when Kyle Lowry struggles, so do the Raptors. After a stellar stretch by both Lowry and his Toronto team, they hit a minor speedbump this week, going 0-2 and getting some poor shooting from their veteran guard.

Lowry spent a lot of time on the floor in his three games - 39.1 minutes per game to be exact - yet averaged a lowly 16ppg through the week. Over that span, he shot 27.5% from the field with 13.3 attempts per game and 20.7% from behind the arc while attempting 9.7 per game. The shooting woes were real for Lowry this week. His playmaking was also subpar, as he posted 6.7 assists but 3.3 turnovers. Look for Lowry to get his Raptors back in line on Tuesday.

Let's not forget why Sabonis made his first All-Star team last month. The Pacers' big man has flown under the radar the entire season, consistently playing an effective game without the proper recognition outside the state of Indiana. This week was no different, as the 6'11" forward helped his team go on a three-game winning streak.

Sabonis posted 19.7 points per game on 63.2% shooting from the field - nothing eye-popping but productive numbers nonetheless. His rebounding and playmaking were the departments that really set him apart, as he averaged 13 boards and 7.3 assists through three games. Those numbers were good for the 4th best and 13th best in the league, respectively. Amond big men, no one else assisted more baskets than Sabonis did. And the icing on the cake? He turned the ball over just once per game, translating to a stellar 7.3 assist-to-turnover ratio. Don't sleep on Sabonis.

They may have won their last two games of the week, but the damage was done in their prior two matchups.

Miami started the week with back-to-back brutal losses. On Monday, the Heat failed to get by the 14-win Cleveland Cavaliers, falling by six points in overtime. Two nights later, on their homecourt where they had won 23 of 26 games, Miami lost to a 16-win Timberwolves team who at the time were on a five-game losing streak. It was Minnesota's first road victory in 52 days! After that game, the Heat had lost seven of their last nine (the only team in the league to have done that) and were 2-5 since added Andre Iguodala. Again, they responded well in their two games later in the week, but going 2-2 and losing to the Cavs and TWolves is not a good look.

Just like the Heat, the Cavaliers earned their spot here based on the first half of their week. Although they lost their last two games, Cleveland had two of their biggest wins of the season to open week 18.

On Monday, the Cavs got by the aforementioned Miami Heat in overtime - perhaps their best victory of the season. Then on Wednesday, they smoked the 76ers by 14 points in a game that they led early and never looked back. I know the Sixers are god awful on the road this year, but it's still a nice win for the second-worst team in the NBA. And these two wins were enough to land them a spot here.

Is the Stock Watch cursed? I think it might be cursed considering whenever a team is featured, they immediately turn their streaks around. In this case, that's bad news for Toronto.

Since being a "Stock Up" team last week, the Raptors have lost three straight games. They only scored over 100 points in one of those contests, and although they faced two title contenders in the Bucks and Nuggets, they also had one big flop in between. After falling to Milwaukee at home, Nick Nurse and his squad fell to the Charlotte Hornets in front of their home crowd. Their offense was ugly and the defense didn't make enough stops to get by a below-average Charlotte roster. Finally, on Sunday night, Toronto lost by 15 to Denver. Overall, the Raptors have fallen back down to earth after a hot stretch that spanned over multiple weeks.

When you watch LeBron James play, you might often wonder about the type of diet he maintains to keep his body in peak form. Well during a game against the Pelicans, King James was shown snackin' on some Red Vines, the candy that had mostly been overshadowed by Twizzlers:

According to my sources (five random Twitter accounts), Red Vines have a completely different texture and taste from Twizzlers, so don't be fooled. Big stock up for Red Vines - maybe I'll actually try them now!

Apparently, if you ask James Harden, it doesn't take skill to win an NBA MVP award. While responding to the words that Giannis Antetokounmpo had to say about him during the All-Star team draft, Harden said that it takes no skill to do what the Greek Freak does:

James Harden is so salty over Giannis Antetokounmpo, look at all that free real estate Antetokounmpo has in Harden’s head pic.twitter.com/6y25QVlDfg
— Kory Waldron (@KWalHoops) February 28, 2020

Under this logic, it's crazy that Tacko Fall hasn't won an MVP considering he is also seven feet and can easily dunk! Man, you can tell how triggered Harden was here.

For starters, I don't think there's been a single day when the value of dogs has gone down. Still, if there is a reason to feature dogs in this column, I will take it ten times out of ten.

There were some talented doggos performing at the Warriors game this week: