Celtics survive against Pacers 114-111 despite blowing another big lead

The Boston Celtics held off a furious rally to beat the Indiana Pacers 114-111 for a much needed win. Boston gave away yet another big second half lead, but were able to take the shot in the mouth and persevere to get the win. The C's got big games from their star players, and just enough from a few role players to beat a feisty Pacers team and get back into the win column. 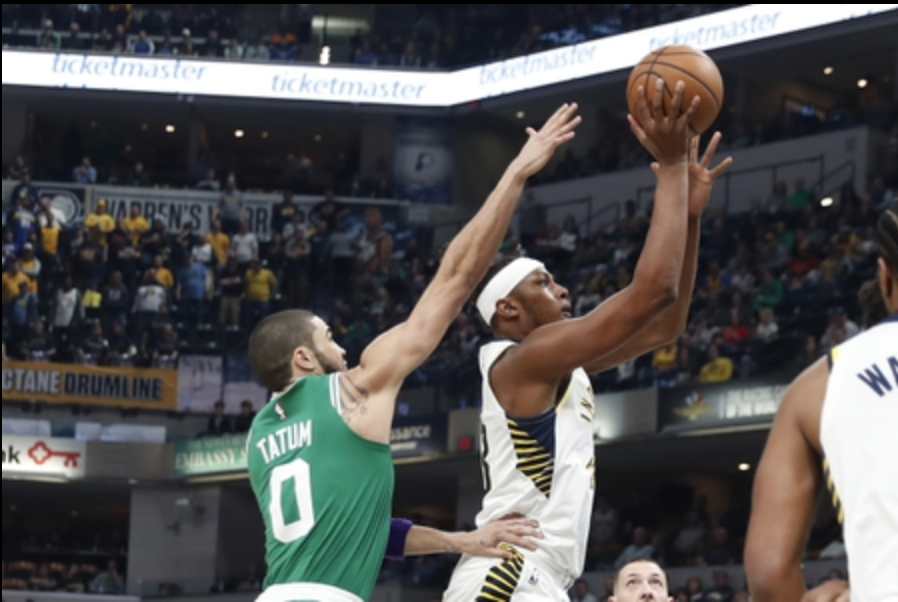 After having struggled, by his standards, over the past two games, Jayson Tatum came out aggressive to start the game. He made two strong moves to the rim for four early points, and had a nice cross-court assist for a corner three after he drew two defenders.

Gordon Hayward, who was coming off of a solid game against the Thunder on Sunday night, also opened the game aggressively. Hayward had his midrange game going in a big way, to the tune of 13 points on 4-4 shooting in just 10 minutes. He must have felt at home in Indiana, where he played his collegiate ball at Butler.

The Celtics' offense was humming in the first quarter. After looking sluggish and out of place over the past few games with players returning from injury and stars still missing action, Boston looked focused on staying aggressive and letting their hard work/ball movement lead to points.

Heck of a start for the Celtics offense. Everyone on the board in first five minutes.

With Hayward on the bench, Tatum took over the offensive attack to open the second quarter. He scored seven straight points over the first three minutes, and extended the Boston lead out to double digits. Tatum looked much more decisive against the Pacers than he has in recent games. When he was on the court, he knew he was the man, and he looked like the guy who won Eastern Conference Player of the Month just a few weeks ago.

The Celtics had the luxury of facing Indiana without starting point guard Malcolm Brogdon, and the Pacer's offense was struggling without him. With former All-Star Victor Oladipo still working back into form after missing almost a year of action, and other players like Domantas Sabonis and Myles Turner not able to create their own shot very effectively, Indiana really missed the likes of Brogdon being able to run the offense and get other players some easy looks.

Tatum continued to mystify as the second quarter went on. The Pacers, at least in the first half, decided not to double Tatum, and they simply didn't have the defenders to slow him down once he got his confidence. He scored 16 points in the second on 5-6 shooting and knocked down some very difficult, contested threes in the process.

Oladipo, who has mostly struggled since coming back, caught fire out of nowhere at the end, but Celtics did well to answer at the other end.

Tatum, Hayward, and Daniel Theis combined for 41 of the team's 59 first half points, and unfortunately, Kemba Walker was once again nearly invisible. It wasn't so obvious in the first half because of the great performances by the others, but this is yet another example of Walker not looking great since returning from injury. He had just five points on 1-5 shooting, and looked like he was still working back into game shape. I'm willing to give Kemba the benefit of the doubt, because he has been great for a majority of the season, but with the playoffs right around the corner, and seeding becoming more and more important, his play is going to be something to watch as the season wraps up.

One of the reasons the Celtics were able to maintain a lead throughout the first half was their ability to get to the free throw line. Boston went a perfect 11-11 from the charity stripe, and the Pacers shot just three. Going aggressively to the rim to start the game was really paying off.

Boston opened the second half on a 12-6 run to extended their lead to 15. Hayward led the charge, scoring eight of the 12 points during the early run. The Celtics were also able to force some turnovers, allowing them to get out in transition and get some easy looks while the defense waS scrambling.

Celtics are doing a great job carving into the paint and finding Hayward. He looks really comfortable with his shot right now. Heading back downcourt once it leaves his hand.

The Pacers tried to slow down the Boston offense with a little zone defense midway through the third, but the Celtics were moving the ball, and their three point shots were falling. The zone defense wasn't effective, and Boston was able to push their lead all the way out to 19 with just under four minutes to play. Walker, to his credit, hit a couple of big time shots during this stretch, and they were as necessarily for the flow of the game as they were for his confidence.

Big swing there. Felt like Pacers were creeping back, Cs in a tough spot with just 1.2 on the shot clock, but Kemba with the catch-and-shoot 3, stop, Theis 3, and it's a 19-point game.

The Pacers tried to emulate some of Boston's recent opponents by coming back from a big deficit, but had no such luck early in the fourth. Indiana was able to cut the lead down to 12 multiple times, but each time Boston made a big shot when it mattered.

The Pacers were able to get the lead under 10 with just under five minutes to play thanks in part to 12-2 run, and all the demons from the last few games started to creep into the minds of Celtics fans. With the lead down to just six, Oladipo knocked down a transition three, and Brad Stevens was forced to call a timeout. Indiana was catching fire, and the Celtics were going to need to tap into the type of play that got them the big lead in the third quarter. Walker was still not able to get anything to go from the field, and each of his misses looked to be going in and out.

Out of the timeout, the Celtics missed two tough looks and TJ Warren knocked down a corner three to tie the game. When Walker air-balled a tough jumper, Sabonis came down the floor and completed an and-1 to put the Pacers up by three, their first lead since the first quarter. With the game teetering, Theis knocked down a HUGE three from the top of the arc to tie up the game 107-107.

After Oladipo made two free throws and Tatum answered with a dunk to tie, the Celtics got the stop they needed, and Marcus Smart converted a circus layup to give Boston a 2-point lead. The C's forced Indiana into a long, contested three that missed, and Walker made one-of-two free throws to put Boston up by three with 17 seconds to play.

The Pacers went for the quick two instead of the tying three, and Sabonis was able to put back an offensive rebound to pull the game within one. The Celtics found themselves with the ball, up by one, with just seven seconds remaining, an almost identical spot to the Thunder game. Unlike against Oklahoma City, though, the Celtics were able to inbound the ball, and Smart knocked down both free throws. Indiana missed a difficult shot as time expired, and Boston escaped with a hard-fought win.

Tatum led all scorers with 30 points and four steals, Hayward added 27 points, 10 rebounds, and five assists, and Theis chipped in 20 points of his own. Sabonis led the Pacers with 28 points, nine rebounds, and eight assists, while Oladipo channeled his All-Star form for 27 points.

The Celtics will be back in action on Thursday when they travel to Milwaukee to take on Giannis and the Bucks.