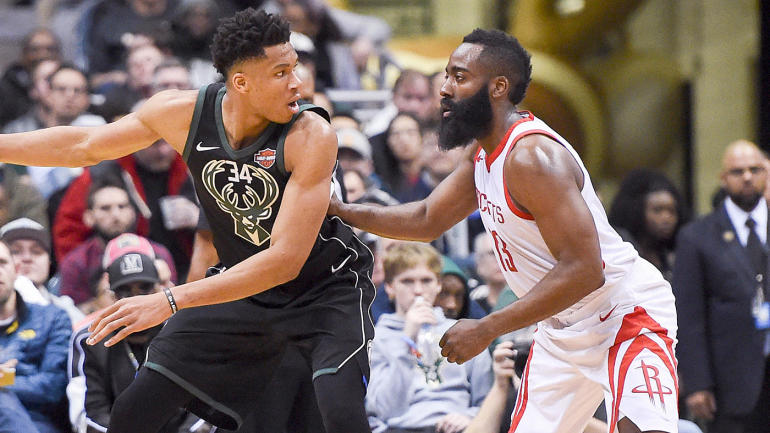 James Harden was definitely in his feels this week. Apparently Giannis Antetokounmpo's picking of Kemba Walker over him in the starting five for the All-Star game weeks prior didn't sit well with him. Or more precisely he didn't like the joke Giannis through in there for his pick.

In response to Nichols mentioning Antetokounmpo's joke about taking Boston Celtics guard Kemba Walker over Harden during the All-Star draft because he wanted "somebody who's gonna pass the ball," the former MVP didn't see the humor behind it.

"I wish I could be 7 feet, run and just dunk. That takes no skill at all," Harden told Nichols during the interview, which aired Friday. "I gotta actually learn how to play basketball and how to have skill. I'll take that any day."

I think Harden is being way too sensitive. They televise the All-Star draft for the purpose of it being entertaining. Giannis, who's first language isn't even English, explains his pick with a light jab and then Harden feels the need to tear Antetokounmpo down. I also agree with Giannis that his game isn't just God given size and athleticism.

"My game is not just power for sure," Antetokounmpo said after the victory. "I came in when I was 18, I was 180 pounds, so to power through big guys was kind of tough.

"But obviously, it's going to be times where you've got to power through guys. Like one of the best players, LeBron, Michael Jordan, Kobe and all those guys ... Shaq, all those guys, they were extremely physical with their play. They made their presence felt in the paint, but obviously I try to work on my game, midrange shots, 3s, being able to screen and roll faster and make the right pass.

"It's hard to drive full speed and try to make the right pass to the corner. I try to get my passes more accurate and it's a lot of things I'm still adding, and hopefully when I add all those things in my game, I'm a more complete player and I'm better and can help my team win and the game is easier."

It's also worth noting that Giannis seems to be a genuinely good dude, so he's a weird target. Anyway, this "beef" will likely die down now since Giannis basically responded without taking any shots back at Harden and simply defended his abilities. Now imagine if the comments had been at a sensitive player like Kevin Durant, his buddy Kyrie Irving, or a player that loves the limelight like Joel Embiid. Then the beef would be on like Donkey Kong.