The Time Lord returns tonight: Kemba to sit out another game 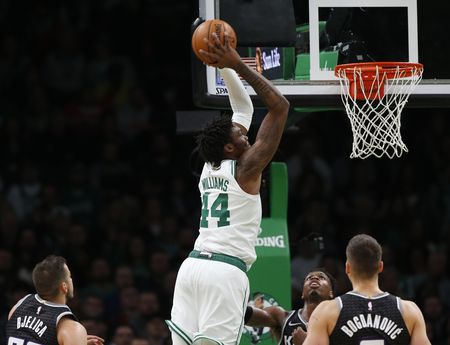 Good news, bad news on the Celtics injury front. Robert Williams will be making his return to the court after a long absence, while Kemba Walker will have to sit out another game after injuring (or reaggravating) his knee in the All-Star game.

Rob Williams on being cleared to play tonight vs. Houston: “I’m very excited just to be going through the tunnel with my teammates.” pic.twitter.com/tQxBdZqN0R

Robert Williams said he’s hoping to show off a new IQ after spending time over the last couple of months focusing on attention to detail.

Williams gives the Celtics an uber athletic big to throw out there. Part of the reason the Celtics didn't have that much interest in Clint Capela is because they see Williams possibly developing into a similar player. Excited to see what Williams can add to this team. If he could develop quick enough so he could be a defensive force come playoff time that would be huge for the Celtics.

Looks like their is potential for Kemba to return on Tuesday, but I'm more concerned with how the knee will hold up through the rest of the season/playoffs.

#NEBHInjuryReport Kemba Walker (knee) worked out today and the plan is to have him play 3-on-3 tomorrow. If he’s cleared to practice Monday, he could return for Tuesday’s game vs. Brooklyn, per Brad Stevens.

Walker was at shootaround today getting up some shots.

Kemba Walker on the court after shootaround getting up shots. pic.twitter.com/PKCG91a3tg